Vectors are the DNA molecules, which carry a foreign DNA fragment to be cloned. They are cloning vehicles, examples of which are Plasmids, Bacteriophages, cosmids, phagemids and artificial chromosomes. The vector types differ in the molecular properties they have and in the maximum size of DNA that can be cloned into each.

Characteristics of an ideal vector.

Bacterial plasmids are extra chromosomal elements that replicate autonomously in cells. Their DNA is circular and double stranded and carries sequences required for plasmid replication (ori sequence) and for the plasmid’s other functions. (Note: A few bacteria contain linear plasmids. Example: Streptomyces species, Borellia burgdorferi). The size of plasmids varies from 1to 500 kb. Plasmids were the first cloning vectors.

DNA fragments of about 570kb are efficiently cloned in plasmid cloning vectors. Plasmids are the easiest to work with. They are easy to isolate and purify, and they can be reintroduced into a bacteria by transformation.

Naturally occurring plasmid vectors rarely possess all the characteristics of an ideal vector. Hence plasmid cloning vectors are derivatives of natural plasmids and are “engineered” to have features useful for cloning DNA.

Examples of plasmid cloning vectors: pBR 322 (plasmid discovered by Bolivar and Rodriguez 322) and pUC 19 (plasmid from University of California). Herbert Boyer and Stanley Cohen in 1973 showed it was possible to transplant DNA segments from a frog into a strain of Escherichia coli using pSC101, a genetically modified plasmid, as the vector. The work laid the foundation for the birth of Genetech, the first company dedicated to commercialization of recombinant DNA. 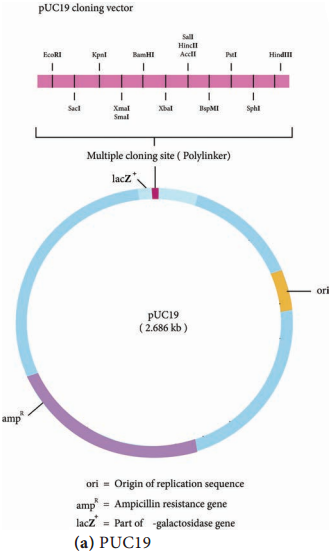 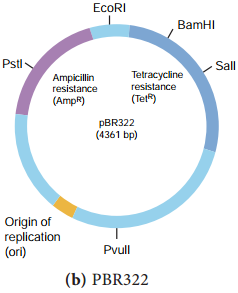 They are viruses that replicate within the bacteria. A phage can be employed as vector since a foreign DNA can be spliced into phage DNA, without causing harm to phage genes. The phage will reproduce (replicate the foreign DNA) when it infects bacterial cell.

Both single and double stranded phage vectors have been employed in recombinant DNA technology. Derivatives of phage can carry fragments up to about 45 kb in length. Example PI bacteriophage and phage λ. 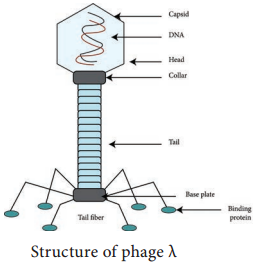 The main advantage of using phage vectors is that foreign DNA can be packed into the phage (invitro packaging), the latter in turn can be injected into the host cell very effectively (Note: no transformation is required). Figure 12.28 shows how a λ phage is used for cloning. 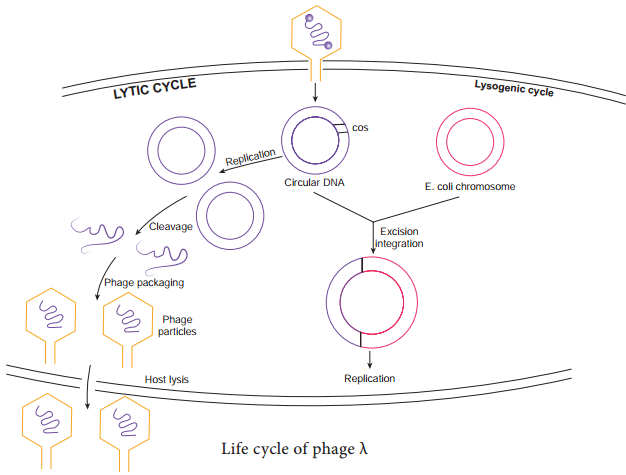 Cosmids are the vectors possessing the characteristics of both plasmid and bacteriophage. The advantage with cosmids is that they carry larger fragments of foreign DNA (35-45 kb) compared to plasmids.

The plasmid vectors that are specifically designed to replicate in two or more different host organisms (say in E.coli and yeast) are referred to as shuttle vectors. The origins of replication for two hosts are combined in one plasmid.

An expression vector is a cloning vector containing the regulatory sequences (promoter sequence) necessary to allow the transcription and translation of a cloned gene or genes. 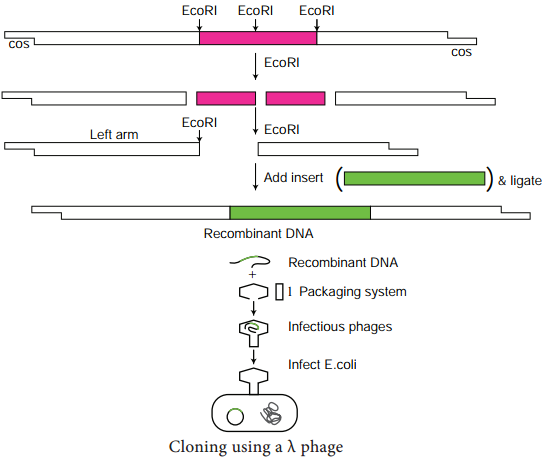