Question 1.
Is it possible for the atom of an element to have one electron, one proton and no neutron? If so, name the element. [NCERT Exemplar]
Answer:
Yes, it is true for hydrogen atom which is represented as \(_{ 1 }^{ 1 }{ H }\)

Question 2.
Will 35Cl and 35Cl have different valencies? Justify your answer. [NCERT Exemplar]
Answer:
No, 35Cl and 35Cl are isotopes of an element.

Question 5.
Write any two observations which support the fact that atoms are divisible. [NCERT Exemplar]
Answer:
Discovery of electrons and protons.

Question 7.
In the atom of an element X, 6 electrons are present in the outermost shell. If it acquires noble gas configuration by accepting requisite number of electrons, then what would be the charge on the ion so formed? [NCERT Exemplar]
Answer:
– 2.

Question 9.
An element X has a mass number 4 and atomic number 2. Write the valency of this element.
Answer:
Valency is zero, as K-shell is completely filled.

Question 17.
What are nucleons? What is their number called?
Answer:
Protons and neutrons present in the nucleus are collectively called nucleons. Their total number is called ‘mass number’.

Question 18.
What do you mean by ‘Atomic number’?
Answer:
Atomic number of an element is the number of protons present in the nucleus of the atom of that element.

Question 19.
Who discovered the nucleus of the atom?
Answer:
Rutherford.

Question 25.
How many electrons are present in the species He2+ ion? Suggest another name for it.
Answer:
He2+ ion has no electrons. It is also called alpha (α) particle.

Question 26.
What is the reason for the identical chemical properties of all the isotopes of an element?
Answer:
Isotopes have identical electronic configuration.

Question 27.
Give one similarity and one difference between a pair of isotopes.
Answer:
They have same number of protons but different number of neutrons in their nuclei.

Question 30.
If K and L shells of an atom are completely filled what will be its name?
Answer:
The atom will belong to the noble gas element neon (Ne).

Question 31.
Do isobars have also identical chemical characteristic like isotopes?
Answer:
No, these are not identical because the isobars have different atomic number as well as different electronic configuration.

Question 3.
The atomic number of calcium and argon are 20 and 18 respectively, but the mass number of both these elements is 40. What is the name given to such a pair of elements? [NCERT Exemplar]
Answer:
∴ They are isobars because isobars have different atomic numbers but same mass number.

Question 7.
The number of electrons in the outermost ‘L’ shell of an atom is 5.
(a) Write its electronic configuration.
(b) What is its valency and why?
Answer:
(a) 2, 5
(b) 3, because it needs three more electrons to complete its octet.

(b) Electrons are negatively charged and their mass is approximately 1/2000 of that of canal rays. 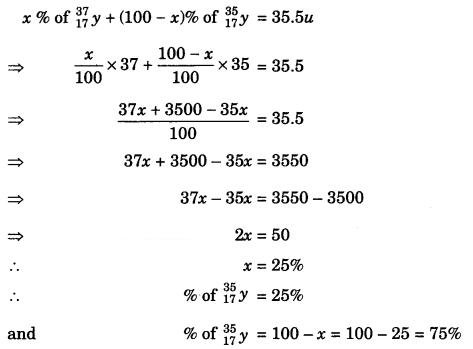 Question 13.
(i) Write the postulates of Bohr model of atom.
(ii) Draw a sketch of Bohr model of an atom with atomic number 15.
Answer:
(i) Only certain special orbits-discrete orbits of electrons are allowed.

(ii) While revolving in discrete orbits, the electrons do not radiate energy. 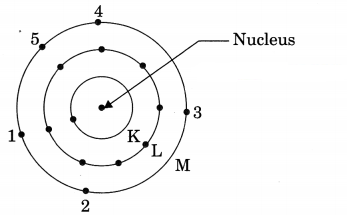 Question 14.
List the main differences between an atom and an ion.
Answer:
Atom:

Question 16.
Give the main points of Dalton’s atomic theory.
Answer:

Question 17.
The number of electrons, protons and neutrons in a species are equal to 18, 16 and 16 respectively. Assign proper symbol of the species.
Answer:
Number of electrons present = 18
Number of neutrons present = 16
Atomic number of the element = 16
The element with atomic number 16 is sulphur (S). Since it has 18 electrons and not 16, it is therefore, an anion (S2- ion). 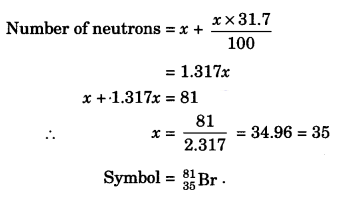 Question 1.
Show diagrammatically the electron distributions in a sodium atom and a sodium ion and also given their atomic number. [NCERT Exemplar]
Answer: 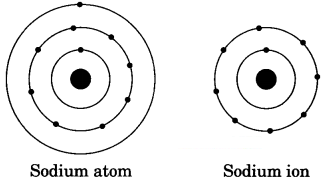 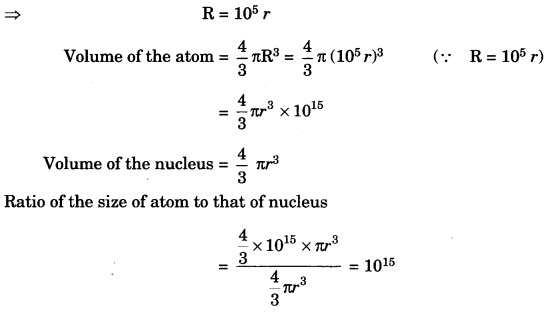 Question 3.
The number of protons, neutrons and electrons in particles from A to E are given below:

Question 6.
State three features of the nuclear model of an atom put forward by Rutherford.
Answer:

(b) According to Rutherford’s experiment, the size of the nucleus is very small as compared to the size of an atom, therefore, atom as a whole is an empty space.

(c) According to Rutherford, the protons are present inside the nucleus and electrons revolve around the nucleus. According to the elecromagnetic theory, a charged particle moving in a circular path continuously loses energy in the form of electromagnetic radiations and finally falls into the nucleus.

(i) Most of the space inside the atom is empty because the a-particles passed through the gold foil without getting deflected.

(ii) Very few particles were deflected from their path, indicating that the positive charge of the atom occupies very little space.

(iii) A very small fraction of a-particles were deflected by 180°, indicating that all the positive charges and mass of the gold atom were concentrated in a very small volume within the atom.

Whereas, Thomson proposed the model of an atom to be similar to a Christmas pudding. The electrons are studded like currants in a positively charged sphere like Christmas pudding and the mass of the atom was supposed to be uniformly distributed.

Question 2.
(a) What were the drawbacks of Rutherford’s model of an atom?
(b) What are the postulates of Bohr’s model of an atom?
Answer:
(a) The orbital revolution of the electron is not excepted to be stable. Any particle in a circular orbit would undergo an acceleration and the charged particles would radiate energy. Thus, the revolving electron would lose energy and finally fall into the nucleus. If this were so, the atom should be highly unstable and hence matter would not exist in the form that we know.

(b) The postulates put forth by Neils Bohr’s about the model of an atom:
(i) Only certain special orbits known as discrete orbits of electrons, are allowed inside the atom.

Question 4.
Answer the following in one line or two:
(a) What is the maximum number of electrons that can be accommodated in the outermost energy shell in an atom?
(b) On the basis of Thomson’s model of an atom, explain how an atom is neutral as a whole.
(c) How many neutrons are present in hydrogen atom?
(d) Do isobars belong to the same element?
(e) An element has five electrons in the M shell which is the outermost shell. Write its electronic configuration.
Answer:
(a) The outermost energy shell in an atom can have a maximum of eight electrons.

(b) According to Thomson’s model of an atom, all the protons in an atom are present in the positively charged sphere while negatively charged electrons are studded in this sphere. Since the electrons and protons are equal in number each carrying one unit charge, the atom as a whole is electrically neutral.

(c) Hydrogen atom has no neutron.

(d) No, isolars belong to different elements since they differ in their atomic numbers.

(i) As most of the alpha particles passed through the foil undeviated, it means that they did not come across any obstruction in their part. Thus, most of the space in an atom was thought to be empty.

(ii) Very few particles deviated by small angles from their path which suggested that nucleus is positively charged.

The revolution of the electron in any circular orbit is not expected to be stable. Any particle in a circular orbit would undergo acceleration. During acceleration, charged particles would radiate energy. Thus, the revolving electrons would lose energy and finally fall into the nucleus. If this were so, the atom should be highly unstable and matter would not exist in the form that we know. We know that atoms are quite stable.

Question 6.
(a) Why are anode rays called canal rays?
(6) Mention two postulates of J.J. Thomson’s model.
(c) Compare the properties of protons and electrons.
Answer:
(a) The anode rays produced at the anode of the discharge tube are called canal rays because they pass through the holes of the cathode.

(b) Atomic number of an element Y is 17.
(i) Write its electronic configuration.
(ii) What is the number of valence electron in Y?
(iii) How many electrons are needed to complete the octet of Y?
(iv) Is it a metal or non-metal?

(c) The valency of Na is 1 and not 7. Give reason.
Answer:
(a) Atoms of different elements with different atomic numbers which have same mass number are called isobars.

Question 1.
What information do you get from the figure given below about the atomic number, mass number and valency of atoms X, Y and Z? Give your answer in a tabular form. [NCERT Exemplar]

Question 4.
The following data represent the distribution of electrons, protons and neutrons in atoms of four elements A, B, C, D.

(b) The fractional atomic masses of elements are due to their isotopes having different masses.

(c) The atoms combine with other atoms to achieve the electronic configuration of the nearest noble gas and thus, become more stable. 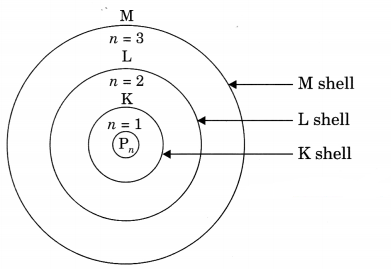 (c) B would be more reactive as its electronic configuration is 2, 8, 6 and it requires two more electrons to complete its octet.

Question 7.
Choose the noble gases from the elements shown in the table below:

Question 8.
The mass number and electronic configuration of five elements A, B, C, D and E are as follows:

The complete table is as follows: