The s-block and p-block elements are so called because their valence electrons are in an s orbital or p orbital respectively. They are also called Typical Elements to distinguish them from the transition and inner transition series.

The s-block in the periodic table of elements occupies the alkali metals and alkaline earth metals, also known as groups 1 and 2. Helium is also part of the s block. The principal quantum number “n” fills the s orbital. There is a maximum of two electrons that can occupy the s orbital.

The s-block is on the left side of the conventional periodic table and is composed of elements from the first two columns plus one element in the rightmost column, the nonmetals hydrogen and helium and the alkali metals (in group 1) and alkaline earth metals (group 2). Their general valence configuration is ns1-2.

S Block Elements are a family of elements with similar characteristcs. S Block Elements include Alkali Metals. They include Lithium, Sodium, Potassium, Rubidium, Cesium, and Francium. They display many of the physical properties similar to metals.

As the s-orbital can accommodate only two electrons, two groups (1 & 2) belong to the s-block of the Periodic Table. Group 1 of the Periodic Table consists of the elements: lithium, sodium, potassium, rubidium, caesium and francium. They are collectively known as the alkali metals. 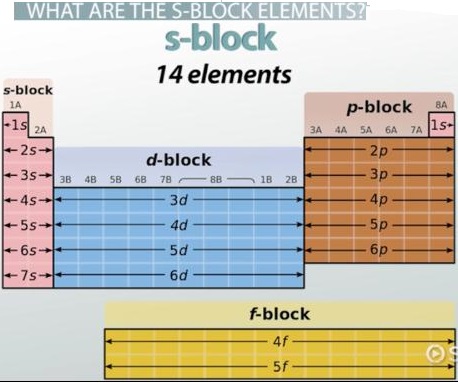