Cyclic photophosphorylation refers to the electrons ejected from the pigment system I (Photosystem I) and again cycled back to the PS I. When the photons activate P700 reaction centre photosystem II is activated. Electrons are raised to the high energy level.

During this movement of electrons Adenosine Di Phosphate (ADP) is phosphorylated, by the addition of inorganic phosphate and generates Adenosine Tri Phosphate (ATP). Cyclic electron transport produces only ATP and there is no NADPH + H+ formation.

Photosystem I need light of longer wave length (> P700 nm). It operates under low light intensity, less CO2 and under anaerobic conditions which makes it considered as earlier in evolution (Figure 13.13). 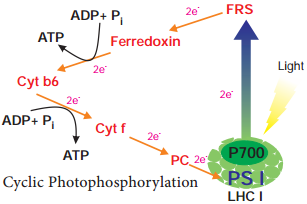 When photons are activated reaction centre of pigment system II(P680), electrons moved to the high energy level. Electrons from high energy state passes through series of electron carriers like pheophytin, plastoquinone, cytochrome complex, plastocyanin and finally accepted by PS I (P700). During this movement of electrons from PS II to PS I ATP is generated (Figure 13.16). 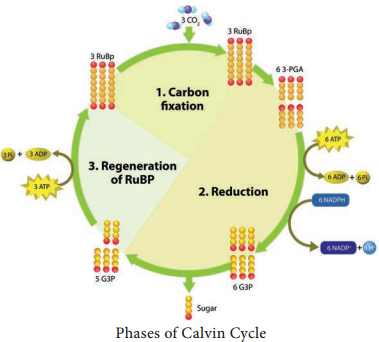 PS I (P700) is activated by light, electrons are moved to high energy state and accepted by electron acceptor molecule ferredoxin reducing Substance (FRS). During the downhill movement through ferredoxin, electrons are transferred to NADP+ and reduced into NADPH + H+ (H+ formed from splitting of water by light).

Electrons released from the photosystem II are not cycled back. It is used for the reduction of NADP+ into NADPH + H+. During the electron transport it generates ATP and hence this type of photophosphorylation is called non-cyclic photophosphorylation. The electron flow looks like the appearance of letter ‘Z’ and so known as Z scheme.

When there is availability of NADP+ for reduction and when there is splitting of water molecules both PS I and PS II are activated (Table 13.3). Non-cyclic electron transport PS I and PS II both are involved co operatively to transport electrons from water to NADP+ (Figure 13.14). 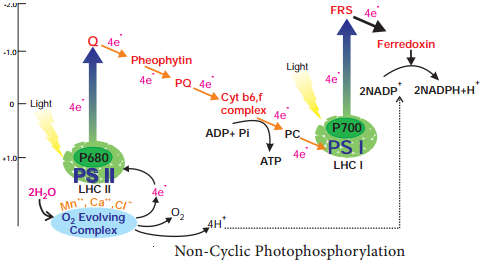 Chemiosmosis theory was proposed by P. Mitchell (1966). According to this theory electrons are transported along the membrane through PS I and PS II and connected by Cytochrome b6-f complex. The flow of electrical current is due to difference in electrochemical potential of protons across the membrane.

Protons in stroma less in number and creates a proton gradient. This gradient is broken down due to the movement of proton across the membrane to the stroma through CFO of the ATP synthase enzyme. The proton motive force created inside the lumen of thylakoid or chemical gradient of H+ ion across the membrane stimulates ATP generation (Figure 13.15). 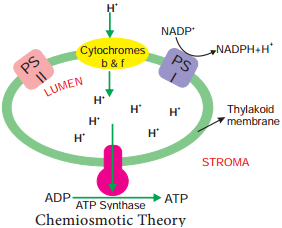