The action of photon plays a vital role in excitation of pigment molecules to release an electron. When the molecules absorb a photon, it is in excited state. When the light source turned off the high energy electrons return to their normal low energy orbitals as the excited molecule goes back to its original stable condition known as ground state.

When molecules absorb or emit light they change their electronic state. Absorption of blue light excites the chlorophyll to higher energy state than absorption of Red light, because the energy of photon is higher when their wavelength is shorter.

When the pigment molecule is in an excited state, this excitation energy is utilised for the phosphorylation. Phosphorylation takes place with the help of light generated electron and hence it is known as photophosphorylation. 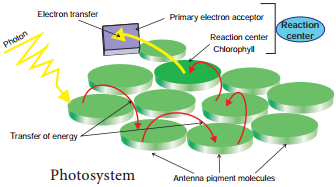 Photo-oxidation is a chain process incorporating a large number of chemical reactions which are subsequent to the outcome of the primary event absorption of a photon, which induces breakdown to free-radical products.

The light-dependent generation of active oxygen. species is termed photooxidative stress. This can occur in two ways:

Oxidation is defined as a process in which an electron is removed from a molecule during a chemical reaction. What happens in oxidation? During oxidation, there is a transfer of electrons.

The Light Reactions of Photosynthesis. Light is absorbed and the energy is used to drive electrons from water to generate NADPH and to drive protons across a membrane. These protons return through ATP synthase to make ATP.

This is an intrinsic feature of the regulation of photosynthetic electron transport. Photoinhibition and photooxidation only usually occur when plants are exposed to stress. Active oxygen species are part of the alarm signalling processes in plants.

Light reactions harness energy from the sun to produce chemical bonds, ATP, and NADPH. These energy-carrying molecules are made in the stroma where carbon fixation takes place. The light-independent reactions of the Calvin cycle can be organized into three basic stages: fixation, reduction, and regeneration.

Photo-oxidation means the release of electrons after absorption of a photon occurs during non-cyclic photophosphorylation. It involves an outsized number of chemical reactions.

Photolysis is an oxidative process that means the splitting of water to form oxygen, protons and electrons in the presence of light. As a result, oxygen evolution happens and the electron travels to PS-IIvia the Mn-protein.

The light-dependent reactions use light energy to make two molecules needed for the next stage of photosynthesis: the energy storage molecule ATP and the reduced electron carrier NADPH. In plants, the light reactions take place in the thylakoid membranes of organelles called chloroplasts.