As discussed earlier, the electronic configuration of the elements shows a periodic variation with increase in atomic numbers. Similarly a periodic trend is observed in physical and chemical behaviour of elements. In this section, we will study the periodic trends in the following properties of elements.

Atomic radius of an atom is defined as the distance between the centre of its nucleus and the outermost shell containing the valence electron.

It is not possible to measure the radius of an isolated atom directly. Except for noble gases, usually atomic radius is referred to as covalent radius or metallic radius depending upon the nature of bonding between the concerned atoms.

It is one-half of the internuclear distance between two identical atoms linked together by a single covalent bond. Inter nuclear distance can be determined using x-ray diffraction studies. 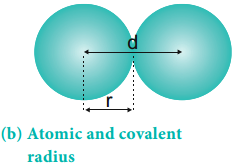 The experimental internuclear distance in Cl2 molecule is 1.98 Å. The covalent radius of chlorine is calculated as below. 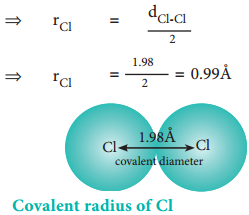 The formation of covalent bond involves the overlapping of atomic orbitals and it reduces the expected internuclear distance. Therefore covalent radius is always shorter than the actual atomic radius.

In case of hetero nuclear diatomic molecules, the covalent radius of individual atom can also be calculated using the internuclear distance (dA-B) between two different atoms A and B. The simplest method proposed by Schomaker and Stevenson is as follows.

where χA and χB are the electronegativities of A and B respectively in Pauling units. Here χA > χB and
radius is in Å.

The metallic radius can be calculated using the unit cell length of the metallic crystal. You will study the detailed calculation procedure in XII standard solid state unit.

The net nuclear charge experienced by valence electrons in the outermost shell is called the effective nuclear charge. It is approximated by the below mentioned equation.

Where Z is the atomic number and ‘S’ is the screening constant which can be calculated using Slater’s rules as described below.

Identify the group in which the electron of interest is present. The electron present right to this group does not contribute to the shielding effect. Each of the electrons within the identified group (denoted by ‘n’) shields to an extent of 0.35 unit of nuclear charge. However, it is 0.30 unit for 1s electron.

Shielding of inner shell electrons. If the electron of interest belongs to either s or p orbital,

Let us explain the calculation of effective nuclear charge on 4s electron and 3d electron in scandium. The electronic configuration of scandium is 1s2, 2s2, 2p6, 3s2, 3p6, 4s2, 3d1. we can rearrange as below. 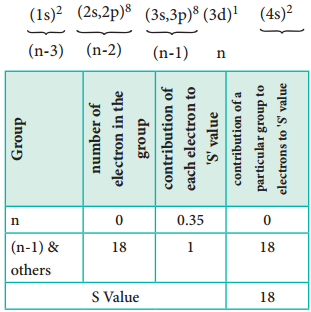 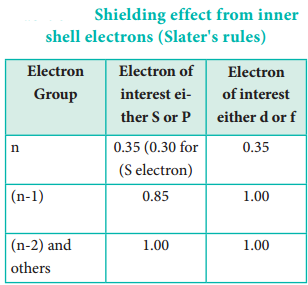 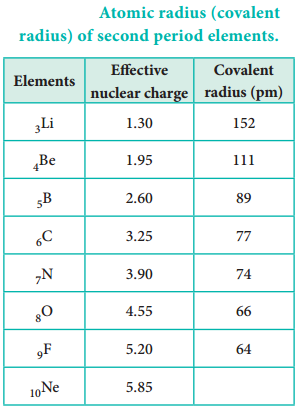 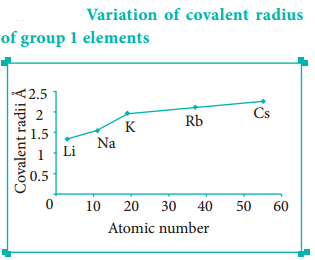 It is defined as the distance from the centre of the nucleus of the ion up to which it exerts its influence on the electron cloud of the ion. Ionic radius of uni-univalent crystal can be calculated using Pauling’s method from the inter ionic distance between the nuclei of the cation and anion. Pauling assumed that ions present in a crystal lattice are perfect spheres, and they are in contact with each other. Therefore,

Where d is the distance between the centre of the nucleus of cation C+ and anion A– and rC+, rA– are the radius of the cation and anion respectively.

Pauling also assumed that the radius of the ion having noble gas electronic configuration (Na+ and Cl– having
1s2 2s2, 2p6 configuration) is inversely proportional to the effective nuclear charge felt at the periphery of
the ion.

Where Zeff is the effective nuclear charge and Zeff = Z – S

Dividing the equation 2 by 3

Let us explain this method by calculating the ionic radii of Na+ and F– in NaF crystal whose interionic distance is equal to 231 pm.

It is defined as the minimum amount of energy required to remove the most loosely bound electron from the valence shell of the isolated neutral gaseous atom in its ground state. It is expressed in kJ mol-1 or in electron volts (eV). M(g) + IE1 → M+(g) + 1 e–

The minimum amount of energy required to remove an electron from a unipositive cation is called second ionisation energy. It is represented by the following equation.

In this way we can define the successive ionisation energies such as third, fourth etc.

In the following graph, there are two deviation in the trends of ionisiation energy. It is expected that boron has higher ionisation energy than beryllium since it has higher nuclear charge. However, the actual ionisation energies of beryllium and boron are 899 and 800 kJ mol-1 respectively contrary to the expectation. It is due to the fact that beryllium with completely filled 2s orbital, is more stable than partially filled valence shell electronic configuration of boron. (2s2, 2p1) 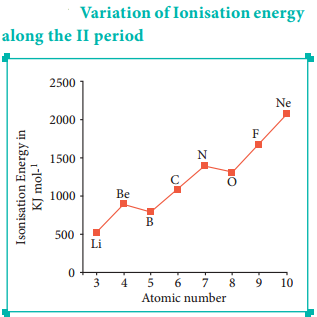 As we move down a group, the number of inner shell electron increases which in turn increases the repulsive force exerted by them on the valence electrons, i.e. the increased shielding effect caused by the inner electrons decreases the attractive force acting on the valence electron by the nucleus. Therefore the ionisation energy decreases. Let us understand this trend by considering the ionisation energy of alkali metals.

It is defined as the amount of energy released (required in the case noble gases) when an electron is added to the valence shell of an isolated neutral gaseous atom in its ground state to form its anion. It is expressed in kJ mol-1

Variation of Electron Affinity in a Period:

The variation of electron affinity is not as systematic as in the case of ionisation energy. As we move from alkali metals to halogens in a period, generally electron affinity increases, i.e. the amount of energy released will be more. This is due to an increase in the nuclear charge and decrease in size of the atoms.

However, in case of elements such as beryllium (1s2, 2s2), nitrogen (1s2, 2s2, 2p3) the addition of extra electron will disturb their stable electronic configuration and they have almost zero electron affinity. 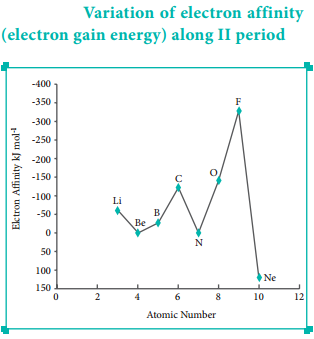 Variation of Electron Affinity in a Group:

As we move down a group, generally the electron affinity decreases. It is due to increase in atomic size and the shielding effect of inner shell electrons. However, oxygen and fluorine have lower affinity than sulphur and chlorine respectively. 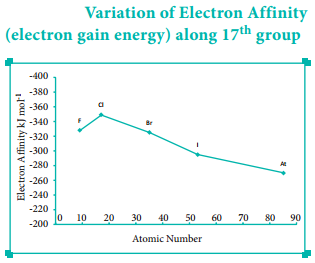 It is defined as the relative tendency of an element present in a covalently bonded molecule, to attract the shared pair of electrons towards itself. Electronegativity is not a measurable quantity. However, a number of scales are available to calculate its value. One such method was developed by Pauling, he assigned arbitrary value of electronegativities for hydrogen and fluorine as 2.1 and 4.0 respectively. Based on this the  electronegativity values for other elements can be calculated using the following expression

Where EAB, EAA and EBB are the bond dissociation energies (K cal) of AB, A2 and B2 molecules respectively.

Variation of Electronegativity in a Period: 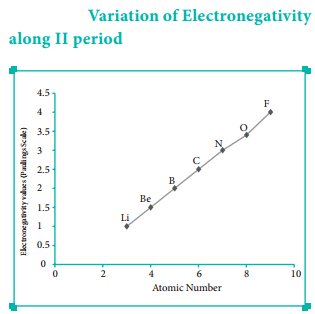 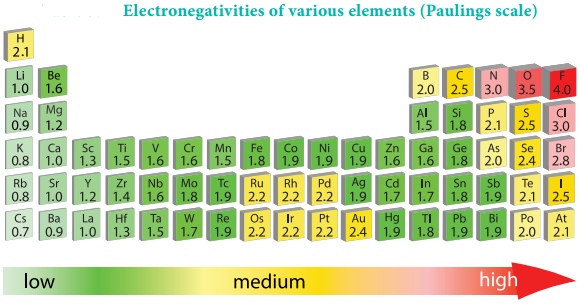 Variation of Electronegativity in a Group: