Nucleic Acids Types and its Functions

The inherent characteristics of each and every species are transmitted from one generation to the next. It has been observed that the particles in nucleus of the cell are responsible for the transmission of these characteristics.

They are called chromosomes and are made up of proteins and another type of biomolecules called nucleic acids. There are mainly two types nucleic acids, the deoxyribonucleic acid (DNA) and ribonucleic acid (RNA). They are the molecular repositories that carry genetic information in every organism.

Composition and Structure of Nucleic Acids

Nucleic acids are biopolymers of nucleotides. Controlled hydrolysis of DNA and RNA yields three components namely a nitrogenous base, a pentose sugar and phosphate group.

These are nitrogen containing organic compounds which are derivatives of two parent compounds, pyrimidine and purine. Both DNA and RNA have two major purine bases, adenine (A) and guanine (G). In both DNA and RNA, one of the pyrimidines is cytosine (C), but the second pyrimidine is thymine (T) in DNA and uracil (U) in RNA. 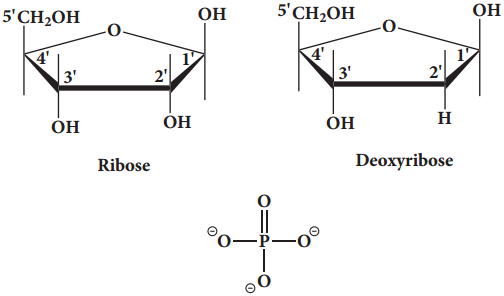 Phosphoric acid forms phospho diester bond between nucleotides. Based on the number of phosphate group present in the nucleotides, they are classified into mono nucleotide, dinucleotide and trinucleotide.

The molecule without the phosphate group is called a nucleoside. A nucleotide is derived from a nucleoside by the addition of a molecule of phosphoric acid. Phosphorylation occurs generally in the 5’ OH group of the sugar. Nucleotides are linked in DNA and RNA by phospho diester bond between 5’ OH group of one nucleotide and 3’ OH group on another nucleotide.

In early 1950s, Rosalind Franklin and Maurice Wilkins used X-ray diffraction to unravel the structure of DNA. The DNA fibers produced a characteristic diffraction pattern. The central X shaped pattern indicates a helix, whereas the heavy black arcs at the top and bottom of the diffraction pattern reveal the spacing of the stacked bases. 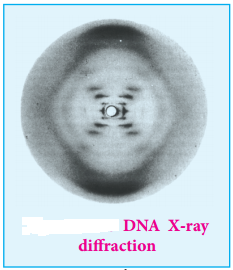 The structure elucidation of DNA by Watson and Crick in 1953 was a momentous event in science. They postulated a 3-dimensional model of DNA structure which consisted of two antiparallel helical DNA chains wound around the same axis to form a right-handed double helix.

The hydrophilic backbones of alternating deoxyribose and phosphate groups are on the outside of the double helix, facing the surrounding water. The purine and pyrimidine bases of both strands are stacked inside the double helix, with their hydrophobic and ring structures very close together and perpendicular to the long axis, thereby reducing the repulsions between the charged phosphate groups. The offet pairing of the two strands creates a major groove and minor groove on the surface of the duplex. 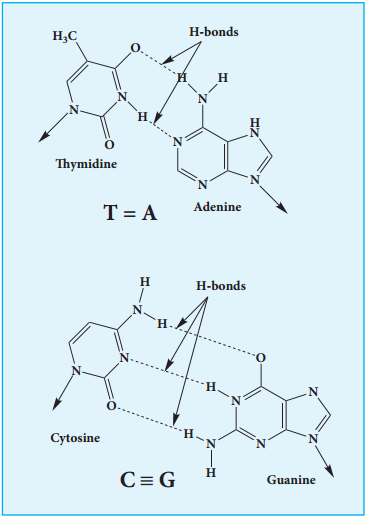 The model revealed that, there are 10.5 base pairs (36 Å) per turn of the helix and 3.4 Å between the stacked bases. They also found that each base is hydrogen bonded to a base in opposite strand to form a planar base pair.

The complementary between the DNA strands is attributable to the hydrogen bonding between base pairs but the base stacking interactions are largely non-specific, make the major contribution to the stability of the double helix.

rRNA is mainly found in cytoplasm and in ribosomes, which contain 60% RNA and 40% protein. Ribosomes are the sites at which protein synthesis takes place.

tRNA molecules have lowest molecular weight of all nucleic acids. They consist of 73 – 94 nucleotides in a single chain. The function of tRNA is to carry amino acids to the sites of protein synthesis on ribosomes.

mRNA is present in small quantity and very short lived. They are single stranded, and their synthesis takes place on DNA. The synthesis of mRNA from DNA strand is called transcription. mRNA carries genetic information from DNA to the ribosomes for protein synthesis. This process is known as translation.

Difference between DNA and RNA

DNA finger printing Traditionally, one of the most accurate methods for placing an individual at the scene of a crime has been a fingerprint. With the advent of recombinant DNA technology, a more powerful tool is now available: DNA fingerprinting is (also called DNA typing or DNA profiling).

It was first invented by Professor Sir Alec Jeffrey sin 1984. The DNA finger print is unique for every person and can be extracted from traces of samples from blood, saliva, hair etc… By using this method we can detect the individual specific variation in human DNA.

In this method, the extracted DNA is cut at specific points along the strand with restriction of enzymes resulting in the formation of DNA fragments of varying lengths which were analysed by technique called gel electrophoresis. This method separates the fragments based on their size.

The gel containing the DNA fragments is then transferred to a nylon sheet using a technique called blotting. Then, the fragments will undergo autoradiography in which they were exposed to DNA probes (pieces of synthetic DNA that were made radioactive and that bound to the fragments).

A piece of X-ray film was then exposed to the fragments, and a dark mark was produced at any point where a radioactive probe had become attached. The resultant pattern of marks could then be compared with other samples. DNA fingerprinting is based on slight sequence differences (usually single base-pair changes) between individuals. These methods are proving decisive in court cases worldwide. 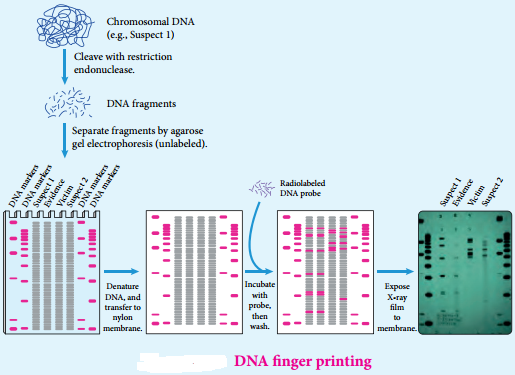 In addition to their roles as the subunits of nucleic acids, nucleotides have a variety of other functions in every cell such as, 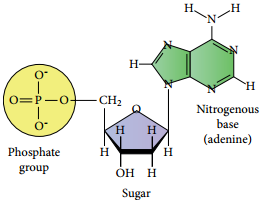 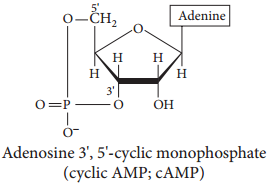