What is adventure ? What are its characteristics ? (Read and discuss.)
Question 1.
Given helow are four headings and four magazine extracts. Match each heading to the corresponding extract and write it as a heading for the extract.

Answer :
For reading and discussing at class level under the guidance of the teacher. Matching with the extract is given below :

Question 2.
In pairs, discuss what is common about all the articles given above. Complete the web chart below, with the characteristics of adventure. (One has been done for you)

Answer :
The comman thing about all the articles is the basic spirt of adventure. 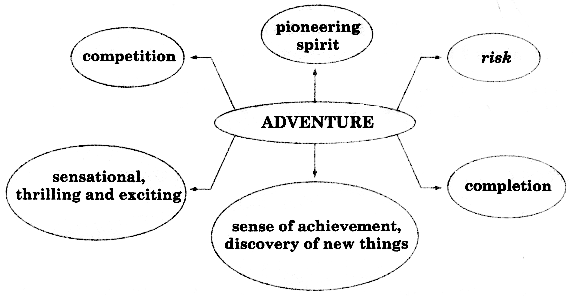 Question 1.
Below are certain words that appear in the story of Amelia Earhart’s journey. The meanings have been given in a jumbled order. Match the words with their meanings.
Words :
(1) Navigator
(2) Skirting
(3) Dysentery
(4) Parachute
(5) Cable
(6) Precise
(7) Transmit
(8) Implement
9) Raft
10) Stowed
11) Aviator
12) Abandoned

Question 2.
The world’s most famous female aviator, Amelia Earhart, disappeared in 1937, as she attempted to become the first woman to fly around the world with her navigator, Fred Noonan. She was last heard of from about 100 miles from the tiny Pacific Howland Island on July 2, 1937.
Read the story of her ‘Final Flight’ : 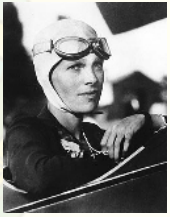 On June 1, 1937 Amelia and her navigator Fred Noonan departed from Miami, Florida; bound for California. Their first destination was San Juan, Puerto Rico; from there, skirting the northeast edge of South America; and then on to Africa and the Red Sea. The flight to Karachi was another first… no one had previously flown non-stop from the Red Sea to India before. From Karachi the Electra flew to Calcutta on June 17… from there, on to Rangoon, Bangkok, Singapore and Bandoeng. The monsoon prevented departure from Bandoeng for several days.

Repairs were made on some of the ‘long distance’ instruments which had given trouble previously. During this time, Amelia became ill with dysentery that lasted for several days. It was June 27 before Amelia and Noonan were able to leave Bandoeng for Port Darwin, Australia. At Darwin the direction finder was repaired, and the parachutes were packed and shipped home… they would be of no value over the Pacific.

Amelia reached Lae in New Guinea on June 29. At this point they had flown 22,000 miles and there were 7,000 more to go… all over the Pacific. Amelia cabled her last commissioned article to the Herald Tribune. Photos show her looking very tired and ill during her time at Lae. The U.S. Coast Guard cutter, Itasca had been standing off Howland Island for some days to act as a radio contact for Amelia. Radio communications in the area were very poor and the Itasca was overwhelmed with commercial radio traffic that the flight had generated.

Amelia left Lae at precisely 00:00 hours Greenwich Mean Time on July 2. It is believed that the Electra was loaded with 1,000 gallons of fuel, allowing for 20-21 hours of flying. At 07:20 hours GMT Amelia provided a position report placing the Electra on course at some 20 miles southwest of the Nukumanu Islands. The last weather report Amelia was known to have received was before take-off. The head wind speed had increased by 10-12 mph, but it is not known if she ever received the report. At 08:00 GMT Amelia made her last radio contact with Lae. She reported being on course for Howland Island at 12,000 feet. There is no real evidence as to the precise track of the aircraft after Nukumanu. No one saw or heard the plane fly over.

Several short transmissions were received by the Itasca with varying signal strengths but they were unable to get a fix on her location because they were too brief. At 19:30 GMT the following transmission was received from the Electra at maximum strength. “KHAQQ calling Itasca. We must be on you but cannot see you… gas is running low…” At 20:14 GMT, the Itasca received the last voice transmission from Amelia giving positioning data. The Itasca continued to transmit on all frequencies until 21:30 hours GMT. They determined that Amelia must have ditched at sea and began to implement search procedures.
It has been determined that the plane went down some 35-100 miles off the coast of Howland Island.

A life raft was stowed on board but no trace was ever found of the raft. Some experts felt that the empty fuel tanks could keep the plane afloat for a period of time. President Roosevelt authorized a search party of 9 naval ships and 66 air crafts at an estimated cost of over $4 million. On July 18, the search was abandoned by ships in the Howland area. George continued to seek help in the search, but by October he too abandoned all hope of finding them alive.

Amelia regularly sent letters to George at stops along her route. These were published in the book ‘Last Flight’. The book has a note from her to George….”Please know I am quite aware of the hazards… I want to do it because I want to do it. Women must try to do things as men have tried. When they fail, their failure must be but a challenge to others.”

Question 3.
The following is a time chart of Amelia’s aviation record in her attempt to go around the world. Complete it with the missing dates and events.

Question 4.
During the summer vacation, your friends and you decide to enroll in “The School for Flying”. While training, you had an interesting and unforgettable experience. Here’s an account of it. Complete it using words from A.l. It was the most amazing summer camp that we have ever had. My friend Jonathan and I decided to join the flying-school. There was rigorous training and we gained a lot of expertise, Jonathan in charting the course of flying and I in flying the plane. 25 May 2010 was the Red Letter Day as we were to fly a plane for nearly half an hour without an instructor. At 6:15 GMT we took the flight, Jonathan as a (1) ________ and I the (2) ________. We remembered all the instructions given at the academy and we were (3) _____________ signals at frequent intervals. The day was clear but windy. We were (4) _____________ hills and were flying along the coast. Suddenly, the weather turned turbulent we (5) ________ our position asking for advice. But unfortunately there was no communication from the other end. All of a sudden, we heard an explosion. The fuel tank of our plane caught fire due to the lightning. We immediately decided to (6) ________ the plane and donned the (7) ___________ that were available. We were blown off 55-60 kms away from the coast and we landed in the outskirts of a dense forest. We were uninjured but hungry
and thirsty. We ate some wild fruit hoping it was safe. But unluckily it was disastrous for Jonathan as he had (8) __________ after that. We remembered our instructor’s clear and (9) ____________ instructions in case of such an emergency. We discussed various strategies and decided to (10) ______________ to the core the life saving strategies. We started exploring the forest. We must have wandered for about an hour or so along the coast when my eyes suddenly fell on something red in the crevice of a big rock. I went closer to it and to my great happiness and relief I saw a (11) __________. It was (12) _____________ away in a cosy nook. Oh! What a Answer relief it was, we were successful in rowing our way back. In the meanwhile, the coastal guards were hunting for us. In an instant we were celebrities.
Answer :
1. navigator
2. pilot
3. transmitting
4. flying over
5. reported
6. abandon
7. parachutes
8. dysentery
9. strict
10. implement
11. raft
12. stowed

Question 5.
You are a member of ‘Explorer’, an adventure club. Write a paragraph about one of your experiences of adventure activity.
Here are some words and phrases you can use :

I and my four friends were the members of Rishikesh Adventure Club. One day we decided to do rafting in the Ganges. Luckily the water flow was Suitable for it. We felt greatly excited, thrilled and curious to know if we would be successful. A great euphoria dawned upon us. We started rafting and enjoyed its movement in swirling water. When the water fell over steep rock heads, it sent us chills. But we didn’t get easily discouraged though we sensed some insecurity. Before flowing with the rapids we had gathered extraordinary courage and prayed also, though we felt a little terrified. At last, the point was reached and lo ! our boat started misbehaving. We felt some agonized moments but we navigated the boat with full confidence. Also the boat swam majestically. We were grateful to the occasion, time and situation. We had completed the job nicely.

I and my four friends were the members of Rishikesh Adventure Club. One day we decided to do rafting in the Ganges. Luckily the water flow was Suitable for it. We felt greatly excited, thrilled and curious to know if we would be successful. A great euphoria dawned upon us. We started rafting and enjoyed its movement in swirling water. When the water fell over steep rockheads, it sent us chills. But we didn’t get easily discouraged though we sensed some insecurity. Before flowing with the rapids we had gathered extraordinary courage and prayed also, though we felt a little terrified. At last, the point was reached and lo ! our boat started misbehaving. We felt some agonized moments but we navigated the boat with full confidence. Also the boat swam majestically. We were grateful to the occasion, time and situation. We had completed the job nicely.

Question 6.
You have read an account of the final stages of Amelia’s life. It had been a saga of struggle and courage. Read about her early life-the factors that inspired her to become an aviator and the difficulties she faced. Make a project on her life. Here is a list of the reference books and websites which will guide you in your endeavour in making a project. It can be in the form of a CD.
REFERENCE ON AMELIA EARHART :

Answer :
Students to make projects individually under the guidance of class teacher. The projects can be in the form of CDs as desired by the teacher. Some guidelines and additional matter about the early life of Amelia together with the factors that inspired her to become an aviator and difficulties faced are given below :