Question 1.
Why does a compass needle get deflected when brought near a bar magnet ?
Answer:
Compass needle is a small magnet which experiences a force in the magnetic field of a bar magnet. Due to this force, it gets deflected. 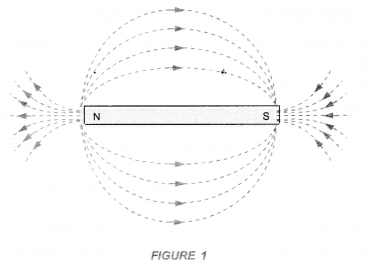 Question 9.
In activity 13-7 (NCERT book), how do we think the displacement of rod AB will be affected if

Answer:
Force acting on a current carrying conductor of length l placed perpendicular to magnetic field B is given by F = B I l 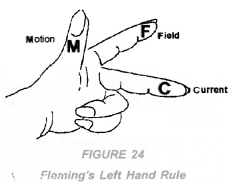 Question 18.
Choose the correct option :
A rectangular coil of copper wires is rotated in a magnetic field. The direction of the induced current changes once in each
(a) two revolutions
(b) one revolution
(c) half revolution
(d) one-fourth revolution,
Answer:
(c).

This shows that current flowing through the oven is more than the current rating (5 A). Hence, the fuse in the circuit melts and oven is saved from damage. 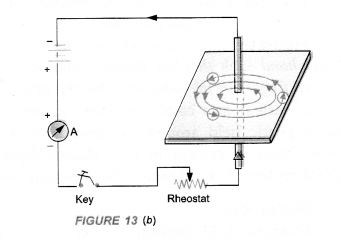 Question 2.
The phenomena of electromagnetic induction is
(a) the process of charging a body
(b) the process of generating magnetic field due to current passing through a coil
(c) producing induced current in a coil due to relative motion between a magnet and the coil
(d) the process of rotating a coil of an electric motor.
Answer:
(c).

Question 3.
The device used for producing electric current is called a
(a) generator
(b) galvanometer
(c) ammeter
(d) motor. (Bihar Board 2012)
Answer:
(a).

Question 5.
At the time of short circuit, the current in the ciruit
(a) reduces substantially
(b) does not change
(c) increases heavily
(d) vary continuously. (Bihar Board 2012)
Answer:
(c).

Question 6.
State whether the following statements are true or false :
(a) an electric motor converts mechanical energy into electrical energy ‘
(b) an electric generator works on the principle of electromagnetic induction
(c) the field at the centre of a long circular coil carrying current will be parallel straight lines
(d) a wire with a green insulation is usually the live wire.
Answer:
(a) False. It converts electrical energy into mechanical energy.
(b) True.
(c) True.
(d) False. Five wire has red insulation cover. 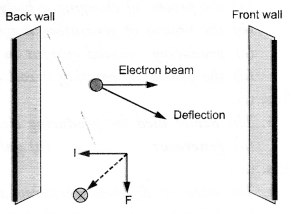 Question 11.
Draw a labelled diagram of an electric motor. Explain its principle and working. What is the function of a split ring in an electric motor ?
Answer:
Electric motor converts electrical energy into mechanical energy.
Principle: Electric Motor is based on the fact that a current carrying conductor placed perpendicular to the magnetic field experiences a force. 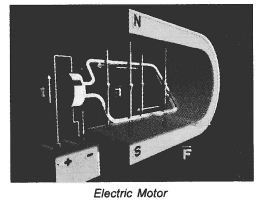 Question 13.
A coil of insulated copper wire is connected to a galvanometer. What will happen if a bar magnet is

Question 14.
Two circular coils A and B are placed close to each other. If the current in the coil A is changed, will some current be induced in the coil B 1 Give reason. (CBSE 2010, 2012)
Answer:
When current in coil A is changed, a changing magnetic field is set up around it. This changing magnetic field also links with coil B and hence some current will be induced in coil B due to electromagnetic induction.

Question 15.
State the rule to determine the direction of a 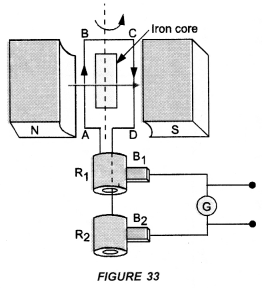 Working : When the armature coil ABCD rotates in the magnetic field provided by the strong field magnet, it cuts the magnetic field lines. Thus, the changing magnetic field produces induced current in the coil. The direction  of the induced current in the coil is determined by the Fleming’s right hand rule.
The current flows out through the brush B1 in one direction in the first half of the revolution and through the brush B2 in the next half revolution in the reverse direction. This process is repeated. Therefore, induced current produced is of alternating nature. Such a current is called alternating current.
DC generator or Dynamo Construction:

Question 17.
When does an electric short circuit occur ? (CBSE 2013)
Answer:
When live wire and neutral wire touch each other (i.e. come in direct contact.), the resistance of the circuit becomes small and hence large amount of current flows through it. As a result, large amount of heat is produced and the circuit catches fire.

Question 18.
What is the function of an earth wire ? Why is it necessary to earth metallic casings of electric appliances ? (CBSE 2010, 2011, 2012, 2013, 2015)
Answer:
Earth wire acts as a safety measure. When the live wire touches the metallic casing of an electric appliance, the electric current flows from the casing of the appliance to the earth through the copper wire. As the earth offers very’ low or almost no resistance to the flow of current, so large current passes through the copper wire instead of human body. This large current heats the circuit and hence the fuse in the circuit melts. As a result of this, the circuit is switched off automatically and hence the electric appliance is saved from burning and the human body suffers no electric shock.

Download the free PDF of Chapter 13 Magnetic Effects of Electric Current or save the solution images and take the print out to keep it handy for your exam preparation.

Hope given NCERT Solutions for Class 10 Science Chapter 13 are helpful to complete your science homework.