Question 3.
A molecule of ammonia (NH3) has
(a) only single bonds
(b) only double bonds
(c) only triple bonds
(d) two double bonds and two single bonds.
Answer:
(a). All bonds are single covalent in nature.

Question 5.
Which of the following are correct chain isomers of butane ? 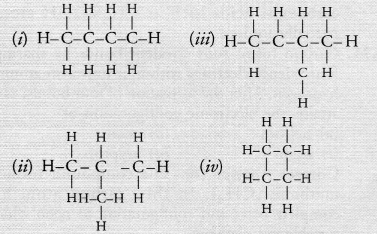 Question 7.
Oils on treating with hydrogen in the presence of palladium or nickel catalyst form fats. This is an example of
(a) Addition reaction
(b) Substitution reaction
(c) Displacement reaction
(d) Oxidation reaction
Answer:
(a). Oils are unsaturated in nature. By the addition of hydrogen, they become saturated.

Question 10.
Which of the following is the correct representation of electron dot structure of nitrogen ?

Answer:
(d). Both the N atoms have a complete octet after electron sharing.

Question 11.
Structural formula of ethyne is

Question 16.
Structural formula of benzene is 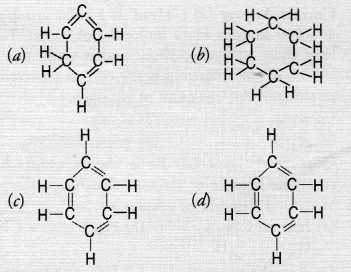 Question 18.
The correct structural formula of butanoic acid is 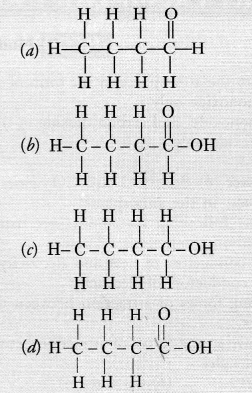 Question 21.
Carbon forms four covalent bonds by sharing its four valence electrons with four univalent atoms e.g. hydrogen. After the formation of four bonds, carbon attains the electronic configuration of
(a) helium
(b) neon
(c) argon
(d) krypton
Answer:
(b). The compound formed is methane (CH4). In this, carbon atom has a complete octet and configuration of neon which is a noble gas element.

Question 22.
The correct electron dot-structure of a water molecule is

Question 23.
Which of the following is not a straight chain hydrocarbon ? 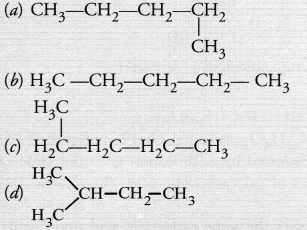 Answer:
(d). Please note that the continuous chains of carbon atoms whether straight or bent are not branched in nature.

Question 24.
Which among the following are unsaturated hydrocarbons ? 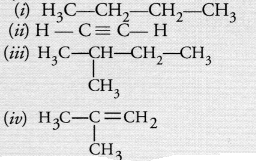 Question 29.
Which of the following represents saponification

Answer:
(d). This is an example of saponification reaction. All other options are not correct.

Question 31.
Write the names of the following compounds :

Question 32.
Identify and name the functional groups present in the following compounds.

These fatty acids exist as triesters of glycerol which is a trihydric alcohol. The triesters are also called triglycerides or simply glycerides and are the constituents of edible oils and fats. These are of animal and vegetable origin e.g. castor oil, linseed oil or soyabean oil. Chemically the triglycerides are formed as a result of esterification reaction.

Question 35.
Identify the functional groups present in the following compounds

Question 36.
How is ethene prepared from ethanol ? Give the reaction involved in it.
Answer:
From ethanol: This method involves the slow oxidation of a dilute solution of ethanol (10-15 per cent) by oxygen present in air in the presence of an enzyme acetobactor.

Question 37.
Intake of small quantity of methanol can be lethal. Comment.
Answer:
From methanol: These days ethanoic acid is manufactured by the reaction between methanol and carbon monoxide in the presence of iodine-rhodium (I2 — Rh) catalyst mixture.

Question 42.
Catenation is the ability of an atom to form bonds with other atoms of the same element. It is exhibited by both carbon and silicon. Compare the ability of catenation of the two elements. Give reasons.
Answer:
The tendency to show catenation is very small in case of Si as compared to C although both the elements belong to the same group (14). This is because of greater atomic size of Si atom (118 pm) than that of carbon (77 pm). As a result, the strength of Si—Si bond is less as compared to that of C—C bond. This means that lesser number of Si atoms can be linked to each other by covalent bonds as compared to carbon atoms.

Question 43.
Unsaturated hydrocarbons contain multiple bonds between the two C-atoms and show addition reactions. Give the test to distinguish ethane from ethene.
Answer:
Distinction between ethane and ethene can be done with the help of bromine water test. Whereas ethene dicolourises the yellow colour of bromine water, ethane does not.

Question 44.
Match the reactions given in Column (A) with the names given in column (B).

Question 45.
Write the structural formulae of all the isomers of hexane.
Answer:

Question 46.
What is the role of metal or reagents written on arrows in the given chemical reactions?

Answer:
(a) Nickel (Ni) acts as a hydrogenation catalyst for the reaction
(b) Cone. H2SO4 removes a molecule of H2O from the reaction mixture and acts as a dehydrating agent.
(c) Alkaline KMnO4 acts as an oxidising agent and oxidises ethanol to ethanoic acid.

Question 47.
A salt X is formed and a gas is evolved when ethanoic acid reacts with sodium hydrogen carbonate. Name the salt X and the gas evolved. Describe an activity and draw the diagram of the apparatus to prove that the evolved gas is the one which you have named. Also, write chemical equation of the reaction involved.
Answer:
The salt X formed in the reaction is sodium ethanoate. The gas evolved is carbon dioxide gas. For the activity and chemical reaction, 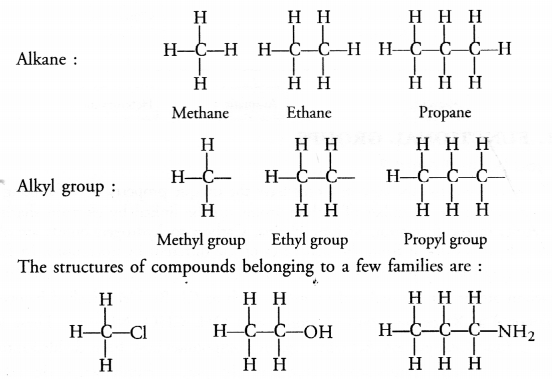 (b) Saturated hydrocarbons or alkanes contain either C—C or C—H bonds in their molecules. These are represented by the general formula CnH2n+2 For example,

Unsaturated hydrocarbons contain either atleast one >C = C< bond or triple —C ≡ C— bond in their molecules. These may be either alkenes or alkynes in nature. The general formula of alkenes is CnH2n while that of alkynes is CnH2n-2 for example,

(c) For the definition of functional group and example, 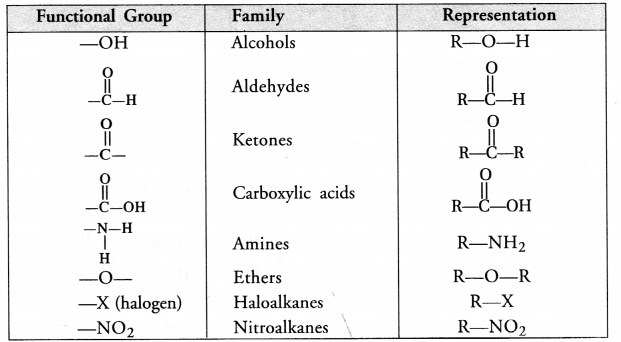 Question 49.
Name the reaction which is commonly used in the conversion of vegetable oils to fats. Explain the reaction in detail.
Answer:
The reaction is known as catalytic hydrogenation. For details, constult section 4.15.

Question 50.
(a) Write the formula and draw electron dot structure of carbon tetrachloride.
(b) What is saponification ? Write the reaction involved in this process.
Answer:

(b) For saponification reaction,

The reaction is known as saponification reaction because it is the basis for the formation of soap.

Question 51.
Esters are sweet-smelling substances and are used in making perfumes. Suggest some activity and the reaction involved for the preparation of an ester with well labelled diagram.
Answer:
Esters as pointed, are pleasant smelling compounds. These are therefore, commonly used as flavouring agents and also in perfumes. When an ester is reacted with water in the presence of a dilute acid like dilute HCl, acid and alcohol are formed as the product. The reaction is called ester hydrolysis.

Ester hydrolysis is the reverse of esterification reaction.
When an ester is reacted with an aqueous solution of base like NaOH or KOH, the product is an alcohol and salt of the acid. For example,

The reaction is known as saponification reaction because it is the basis for the formation of soap.

Question 52.
A compound C (molecular formula, C2H4O2) reacts with Na-metal to form a compound R and evolves a gas which burns with a pop sound. Compound C on treatment with an alcohol A in presence of an acid forms a sweet smelling compound S (molecular formula, C3H6O2). On addition of NaOH to C, it also gives R and water. S on treatment with NaOH solution gives back R and A.
Identify C, R, A, S and write down the reactions involved.
Answer:
From the available information, it is evident that

The chemical reactions involved are as follows :

Question 53.
Look at given figure and answer the following questions : 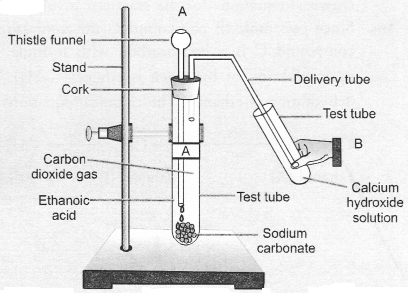 (a) What change would you observe in the calcium hydroxide solution taken in tube B ?
(b) Write the reaction involved in test tubes A and B respectively.
(c) If ethanol is used instead of ethanoic acid, would you expect the same change ?
(d) How can a solution of lime water be prepared in the laboratory ?
Answer:
(a) It would become milky.

In test tube B, calcium hydroxide reacts with carbon dioxide to form calcium carbonate which is milky in colour.

(c) No, it would be different. No chemical reaction is possible between ethanol and sodium carbonate.
(d) Lime w’ater is prepared by keeping suspension of calcium hydroxide overnight in a beaker. The solution is decanted and is transferred to another beaker. It contains traces of calcium hydroxide and is called lime water.

Question 54.
How would you bring about the following conversions ? Name the process and write the reaction involved.
(a) ethanol to ethene.
(b) Methanol to Ethanoic acid. Write the reactions.
Answer:
(a) From ethanol: This method involves the slow oxidation of a dilute solution of ethanol (10-15 per cent) by oxygen present in air in the presence of an enzyme acetobactor.

The acid obtained is in the form of dilute solution called vinegar.
We have also studied under ethanol that it gets oxidised to ethanoic acid in the presence of dilute solution of alkaline KMnO4 or acidified K2Cr2O7.
(b) From methanol: These days ethanoic acid is manufactured by the reaction between methanol and carbon monoxide in the presence of iodine-rhodium (I2 — Rh) catalyst mixture.

Therefore, it is an oxidation reaction.
Substitution Reactions : Substitution reactions are also called replacement reactions and you are quite familiar with these. In organic compounds, particularly the saturated hydrocarbons (or alkanes), these reactions are very common. One or more hydrogen atoms in the molecule of alkane such methane get substituted by chlorine atoms when the reaction is carried with chlorine in the presence of ultraviolet sun light.

Hope given NCERT Exemplar Solutions for Class 10 Science Chapter 4 Carbon and Its Compounds helpful to you. If you have any doubts, please comment below. We try to provide online math tutoring for you.