Question 3.
A student wants to have third colour from the top corresponds to the colour of the sky after the dispersion of white light through a glass prism. He placed prism ABC with BC as base as shown in figures P, Q, R and S. Which position of the prism is correct ?

Question 10.
Which of the following phenomena contributes significantly to the reddish appearance of the sun at sunrise or sunset ?
(a) Dispersion of light
(b) Scattering of light
(c) Total internal reflection of light
(d) Reflection of light from the earth.
Answer:
(b).
Explanation : Intensity of scattered light, I ∝ 1/λ4. Since the wavelength of red light is greater than the wavelengths of all other lights, therefore, red colour is scattered least and confined around the sun.

Question 11.
Water in deep sea is bluish in colour due to
(a) absorption of light by the sea
(b) reflection of sky in water
(c) scattering of light
(d) presence of plants in the sea.
Answer:
(c).

Question 12.
When light rays enter the eye, most of the refraction occurs at the
(a) crystalline lens
(b) outer surface of the cornea
(c) iris
(d) pupil
Answer:
(b).

Question 16.
A student sitting at the back of the classroom cannot read clearly the letters written on the black board. What advice will a doctor give to her ? Draw ray diagram for the correction of this defect.
Answer:
Doctor will advice the student to wear spectacles havi ng con¬cave lens of suitable focal length or power as she is suffering from myopia.
For diagram,

Question 19.
How will you use two identical prisms so that a narrow beam of white light incident on one prism emerges out of the sec¬ond prism as white light ? Draw the diagram.
Answer:
Perform an activity to show that the colours of white light splitted by a glass prism can be recombined to get white light by another glass prism.
Apparatus required. Two glass prisms made of same kind of glass, a card board having a fine hole at its centre, a white screen.
Procedure:

Question 20.
Draw a ray diagram showing the dispersion through a prism when a narrow beam of white light is incident on one of its refracting surfaces. Also indicate the order of the colours of the spectrum obtained.
Answer:

Question 21.
Is the position of a star as seen by us its true position. Justify your answer.
Answer:
No.
Light emitted by distant stars (act as point sources of light) passes through the atmosphere of the earth before reaching our eyes. The atmosphere of the earth is not uniform but consists of many layers of different densities. The layers close to the surface of the earth are optically denser. As we go higher and higher, the density of layers and refractive index decreases progressively. As the light from a star enters the upper­most layer of the atmosphere, it bends towards the normal as it enters the next layer. This process continues till the light enters our eyes. So due to refraction of light, the apparent position of the star is different from the actual position of the star (Figure 13). 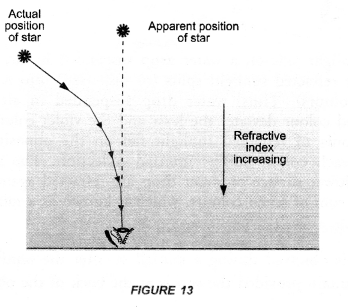 Question 23.
Why is the colour of clear sky blue ?
Answer:
When sunlight enters the earth’s atmosphere, the atoms or molecules of the gases present in the atmosphere scatter this light. Since wavelength of red colour is larger than the wavelengths of other colours in sunlight, so red colour is scattered least. Violet colour is scattered the most followed by blue, green, yellow, orange and red colours respectively. Our eye is more sensitive to the blue light than the violet light. Therefore, scattered light in the sky contains blue colour in plenty and hence the clear sky appears blue.
Note : Sky appears greyish over cities having industrial units. The smoke and dust particles in the atmosphere over such cities scatter red, orange and yellow colours more than other colours of small wavelengths. Hence, the sky appears greyish.

Question 24.
What is the difference in colours of the sun observed during sunrise/sunset and noon ? Give explanation for each.
Answer:
At the time of sunrise or sunset, the position of the sun is very far away from us (Figure 16). 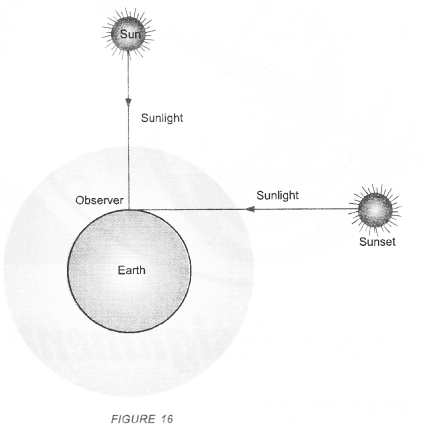 The sunlight travels longer distance through the atmosphere of the earth before reaching our eyes. Scattering of blue light is more than the scattering of red light. As a result of this, more red light reaches our eyes than any other colour. Hence sunset and sunrise appear red.
During noon, the sun is overhead and sunlight travels less distance through the earth’s atmosphere to reach our eyes. In this case, the scattering of almost all colours is very small. Hence, the sun appears white.