The Age of Industrialisation Class 10 MCQs Questions with Answers

Question 2.
A fuller’s job is to
(a) pick up wool
(b) sort wool according to its fibre
(c) gather cloth by pleating
(d) carry wool to the spinner

Question 3.
Which of the following countries faced labour shortage in the nineteenth century?
(a) America
(b) Britain
(c) France
(d) Germany

Question 5.
The first cotton mill in India was established in
(a) Madras
(b) Calcutta
(c) Gujarat
(d) Bombay

Question 7.
Why did the weavers suffer from a problem of raw cotton?
(a) The cotton crop perished
(b) Raw cotton exports increased
(c) Local markets shrank
(d) Export market collapsed

Question 8.
In Victorian Britain the upper classes- aristocratic class and bourgeoisie preferred handmade goods because:
(a) they were made from imported material.
(b) the handmade goods came to symbolize refinement and class.
(c) they were better finished.
(d) only upper class could afford the expensive items.

Question 9.
By late 19th century why did the British manufacturers print calendars for advertisements?
(a) Indian people were fond of using calendars in their houses.
(b) Unlike newspapers and magazines, calendars were used even by people who did not know how to read or write.
(c) It was cheaper to advertise goods through calendars.
(d) It used to add beauty to the room.

Question 10.
Which of the following innovations helped the weavers in increasing productivity and compete with mill sector?
(a) Spining jenny
(b) Fly shuttle
(c) Cotton Gin
(d) Roller

Question 12.
According to historians, who was the typical worker in the mid-nineteenth century?
(a) Craftsperson and labourer
(b) Machine operator
(c) Unskilled labour
(d) None of these

Question 13.
What do you mean by Carding?
(a) In spinning
(b) In weaving
(c) In which cotton or wool fibres are prepared for spinning
(d) In which finishing of cloth is done

Question 14.
Who was the Staplers and Fullers?
(a) Gathers cloth by pleating
(b) Sorts wool according to its fibre
(c) Both a and b
(d) None of these

Question 15.
What was the reason behind new merchants could not set up business in the towns in Europe?
(a) The rules became barrier
(b) Scarcity of product to start any business
(c) The powerful trade guilds and urban crafts made it difficult
(d) None of these

Question 16.
Which pre-colonial port connected India to the Gulf countries and the Red Sea ports?
(a) Bombay
(b) Hooghly
(c) Surat
(d) Machhalipatanam

Question 18.
What were supply during the First World War from Indian factories?
(a) Jute bags and cloth for army uniforms
(b) Tents and leather boots
(c) Horse and mule saddles
(d) All of these

Question 20.
Which War caused new problems for Indian weavers?
(a) The American Civil War
(b) First world war
(c) Second world war
(d) None of these

Question 21.
Who was Dwarkanath Tagore?
(a) A social reformer
(b) Musician
(c) Industrialist
(d) Painter

Question 24.
During the 19th century, Which were the most dynamic industries in Britain?
(a) Cotton and metal
(b) Metal and sugar
(c) Sugar and cotton
(d) None of these

Question 25.
What are the problems faced by the cotton weavers in India?
(a) Export market had collapsed
(b) They did not have good quality cotton
(c) Imported goods were cheap
(d) All of the above

Question 1.
Look at the given picture taken from Textbook Page 125 and then answer the questions that follow: 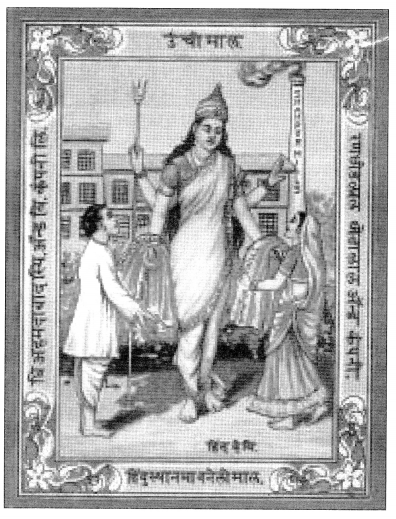 (i) What do you see in the above picture? What is the goddess shown offering?
(ii) What message does the manufacturer want to convey to the people of India?
(iii) How did people of India support the swadeshi movement?