This type of isomers arises in the coordination compounds having both the cation and anion as complex ions. The interchange of one or more ligands between the cationic and the anionic coordination entities result in different isomers.

For example, in the coordination compound, [Co(NH3)6][Cr(CN)6] the ligands ammonia and cyanide were bound respectively to cobalt and chromium while in its coordination isomer [Cr(NH3)6][Co(CN)6] they are reversed.

Some more examples for coordination isomers

This type of isomers arises when an ionisable counter ion (simple ion) itself can act as a ligand. The exchange of such counter ions with one or more ligands in the coordination entity will result in ionisation isomers. These isomers will give different ions in solution. For example, consider the coordination compound [Pt(en)2Cl2]Br2.

In this compound, both Brand Cl– have the ability to act as a ligand and the exchange of these two ions result in a different isomer [Pt(en)2Br2]Cl2. In solution the first compound gives Br– ions while the later gives Clions and hence these compounds are called ionisation isomers.

Some more example for the isomers,

Similar to organic compounds, coordination compounds also exhibit stereoisomerism. The stereoisomers of a coordination compound have the same chemical formula and connectivity between the central metal atom and the ligands. But they differ in the spatial arrangement of ligands in three dimensional space. They can be further classified as geometrical isomers and optical isomers.

Geometrical isomerism exists in heteroleptic complexes due to different possible three dimensional spatial arrangements of the ligands around the central metal atom. This type of isomerism exists in square planer and octahedral complexes. In square planar complexes of the form [MA2B2]n+ and [MA2BC]n+ (where A, B and C are mono dentate ligands and M is the central metal ion/atom), Similar groups (A or B) present either on same side or on the opposite side of the central metal atom (M) give rise to two different geometrical isomers, and they are called, cis and trans isomers respectively.

The square planar complex of the type [M(xy)2]n+ where xy is a bidentate ligand with two different coordinating atoms also shows cis-trans isomerism. Square planar complex of the form [MABCD]n+ also shows geometrical isomerism. In this case, by considering any one of the ligands (A, B, C or D) as a reference, the rest of the ligands can be arranged in three different ways leading to three geometrical isomers. 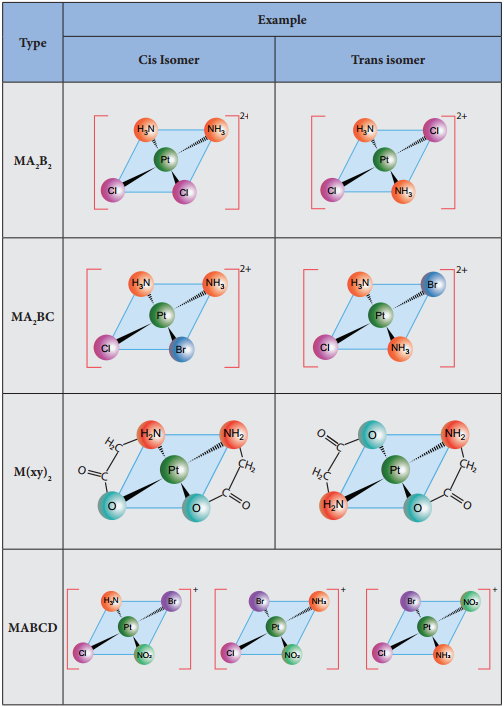 Octahedral complexes of the type [MA2B4]n+, [M(xx)2B2]n+ shows cis-trans isomerism. Here A and B are monodentate ligands and xx is bidentate ligand with two same kind of donor atoms. In the octahedral complex, the position of ligands is indicated by the following numbering scheme. 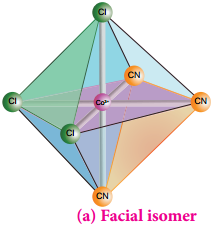 If the three similar ligands are present around the meridian which is an imaginary semicircle from one apex of the octahedral to the opposite apex as shown in the figure 5.6(b), the isomer is called as a meridional isomer (mer isomer). This is called meridional because each set of ligands can be regarded as lying on a meridian of an octahedron. 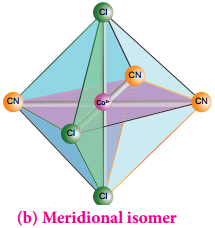 Coordination compounds which possess chairality exhibit optical isomerism similar to organic compounds. The pair of two optically active isomers which are mirror images of each other are called enantiomers. Their solutions rotate the plane of the plane polarised light either clockwise or anticlockwise and the corresponding isomers are called ‘d’ (dextro rotatory) and ‘l’ (levo rotatory) forms respectively. The octahedral complexes of type [M(xx)3]n+, [M(xx)2AB]n+ and [M(xx)2B2]n+ exhibit optical isomerism. 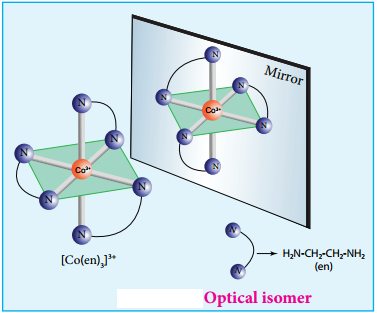 The coordination complex [CoCl2(en)2]+ has three isomers, two optically active cis forms and one optically inactive transform. These structures are shown below.