Industrially Important Microorganisms and their Products of Microbiology

Microorganisms have the powerful capacity to produce numerous products, during their life cycle. Flowchart 6.1 shows the production of valuable metabolic products during the growth of microorganisms on a suitable medium under controlled environmental conditions. Microbial products are often classified as primary and secondary metabolites. Secondary metabolites do not play a role in development, growth and reproduction of microorganisms. They are produced at the end of growth phase near stationary phase. They usually accumulate during the period of nutrient limitation or waste product accumulation that follows the exponential phase. These compounds have no direct relationship to the synthesis of cell materials and normal growth. 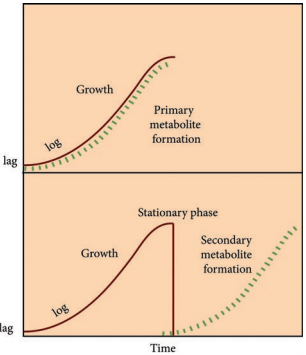 Some industrially important products are,

The industrial production of commercial products is carried out by fermentation process. The term fermentation is defined scientifically in a strict sense as a biological process that occurs in the absence of oxygen (anaerobic).

In industrial sense any process mediated by or involving microorganisms in which a product of economic value is obtained is called fermentation. The term Industrial fermentation also means large scale cultivation of microorganisms even though most of them are aerobic.

There are many microbiological processes that occur in the presence of air (aerobically) yielding incomplete oxidation products.
Examples: