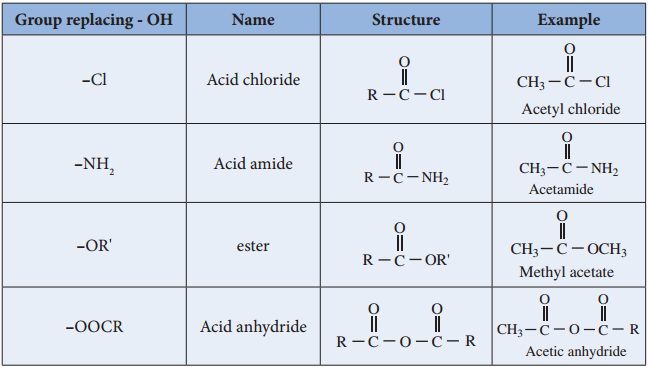 The reactivity of the acid derivatives follows the order

The above order of reactivity can be explained in terms of

1. Basicity of the Leaving Group

. Hence the reverse is the order of reactivity. 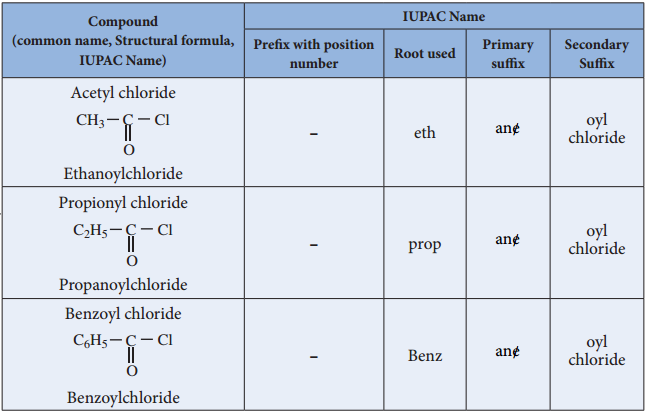 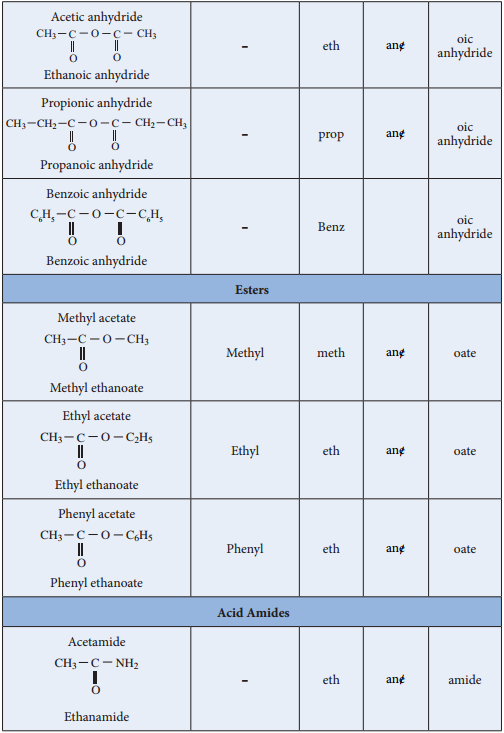 Methods of Preparation of Acid Chloride:

Acid chlorides are prepared from carboxylic acid by treating it with anyone of the chlorinating agent such as SOCl2, PCl5, or PCl3

1. By Reaction with Thionyl Chloride (SOCl2)

This method is superior to others as the by products being gases escape leaving the acid chloride in the pure state.

They react with weak nucleophiles such as water, alcohols, ammonia and amines to produce the corresponding acid, ester, amide or substituted amides.

(a) When reduced with hydrogen in the presence of ‘poisoned’ palladium catalyst, they form aldehydes. This reaction is called Rosenmund reduction. We have already learnt this reaction under the preparation of aldehydes.

(b) When reduced with LiAlH4 gives primary alcohols.

We have already learnt that when carboxylic acids are heated with P2O5 dehydration takes place to form
acid anhydride.

2. By Reaction of Acid Halide With a Salt of Carboxylic Acids

We have already learnt that treatment of alcohols with carboxylic acids in presence of mineral acid gives esters. The reaction is carried to completion by using an excess of reactant or by removing the water from the reaction mixture.

Esters are colour less liquids or solids with characteristic fruity smell. Flavours of some of the esters are given below.

They react with weak nucleophiles such as water, alcohols, ammonia and amines to produce the corresponding acid, ester, amide or substituted amides.

We have already learnt that hydrolysis of esters gives alcohol and carboxylic acid.

Esters of an alcohol can react with another alcohol in the presence of a mineral acid to give the ester of second alcohol. The interchange of alcohol portions of the esters is termed transesterification.

Esters react slowly with ammonia to form amides and alcohol.

Esters containing at least one ∝ – hydrogen atom undergo self condensation in the presence of a strong base such as sodium ethoxide to form β – keto ester.

Acid amides are derivatives of carboxylic acid in which the – OH part of carboxyl group has been replaced by – NH2 group. The general formula of amides are given as follows image 21 Now, we shall focus our attention mainly on the study of chemistry of acetamide.

Acid amides are prepared by the action of ammonia with acid chlorides or acid anhydrides.

Amides behave both as weak acid as well as weak base and thus show amphoteric character. This can be proved by the following reactions.

Acetamide (as acid) reacts with sodium to form sodium salt and hydrogen gas is liberated.

Amides on heating with strong dehydrating agents like P2O5 get dehydrated to form cyanides.

Amides reacts with bromine in the presence of caustic alkali to form a primary amine carrying one carbon less than the parent amide.

Amides on reduction with LiAlH4 or Sodium and ethyl alcohol to form corresponding amines.