The term mutant refers to an organism in which either the base sequence of DNA or the phenotype has been changed. A mutant is an organism whose genotype differs from that found in nature. The process of formation of mutant organism is called mutagenesis.

Mutations can also be induced experimentally by application of mutagens. Mutagens are agents that cause mutations.

Mutagens and their Mode of Action

UV light causes mutations because the purine and pyrimidine bases in DNA absorb light strongly in the ultraviolet range (254 to 260 nm). At this wavelength, UV light induces point mutations primarily by causing photochemical changes in the DNA.

One of the effects of UV radiation on DNA is the formation of abnormal chemical bonds between adjacent pyrimidine molecules in the same strand, or between pyrimidines on the opposite strands, of the double helix.

This bonding is induced mostly between adjacent thymines, forming what are called thymine dimers (Figure 12.10), usually designated TT. This unusual pairing produces a bulge in the DNA strand and disrupts the normal pairing of T’s (thymines) with corresponding A’s(adenines) on the opposite strand. If UV induced genetic damage is not repaired, mutations or cell death may result. 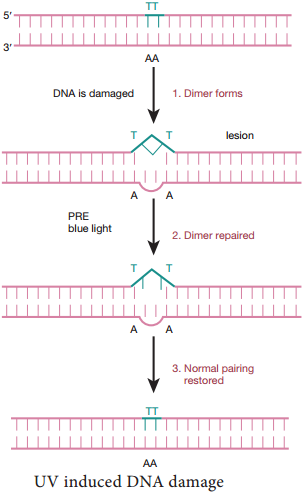 Chemical mutagens include both naturally occurring chemicals and synthetic substances. These mutagens can be grouped into different classes on the basis of their mechanism of action. They are 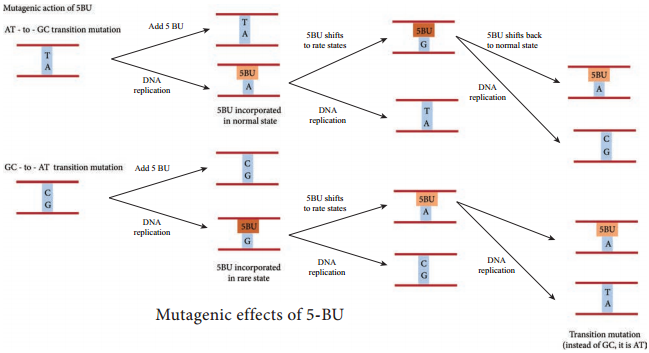 (ii) Base Modifying Agents are chemical that act as mutagens by modifying the chemical structure and properties of bases. The three types of mutagens that work in this way are

Acridine, proflavin, ethidium bromide are a few examples of intercalating agents. These insert (intercalate) themselves between adjacent bases in one or both strands of the DNA double helix. Intercalating agents can cause either additions or deletions.

The Ames Test: A Screen for Potential Carcinogens

Everyday we are exposed to a wide variety of chemicals in our environment, such as drugs, cosmetics, food additives, pesticides, and industrial compounds. Many of these chemicals can have mutagenic effects, including genetic diseases and cancer. Some banned chemical warfare agents (e.g. mustard gas) also are mutagens.

A number of chemicals (subclass of mutagens) induce mutations that result in tumorous or cancerous growth. These chemical agents are called chemical carcinogens. Directly testing the chemicals for their ability to cause tumors in animals is time consuming and expensive. However, the fact that most chemical carcinogens are mutagens led Bruce Ames to develop a simple, inexpensive, indirect assay for mutagens.

A control plate is also set up which does not contain the chemical. After incubation the control plates may have few colonies resulting from spontaneous reversion of the his – strain. Compared to the control plates if there are increased number of colonies on test plate, it indicates that the chemical has reverted the mutant strain back to wild type. This chemical is likely to be a carcinogen. Figure 12.14 shows steps in Ames test. 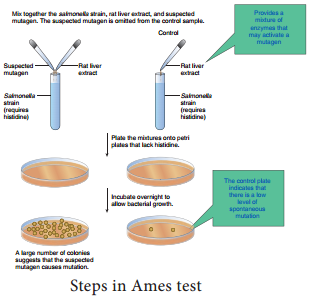