It is Worldwide in distribution they are more common in the tropics than elsewhere. It is found wherever sanitation is poor.

Trophozoites of E.histolytica live in the mucous and submucous layers of the large intestine of human.

E. histolytica occurs in 3 forms as Trophozoite, Precyst and Cyst.

It is the growing or feeding stage of the parasite. It is the only form present in tissues. It has no fixed shape. They vary in size from 18 to 40µ, average being 20 to 30µ. The cytoplasm is usually described as outer ectoplasm and inner endoplasm (Figure 8.1). The endoplasm contains nucleus, food vacuoles, erythrocytes, occasionally leucocytes and tissue debris.

The nucleus is characterised by evenly arranged chromatin on the nuclear membrane and the presence of a small, compact, centrally located karoyosome (It is a DNA containing body, situated peripherally or centrally within the nucleus). Trophozoites exhibits active crawling or gliding motility by forming finger-like projections called Pseudopodia.

The trophozoite reproduce by binary fission in every 8 hours. Trophozoites survives upto 5 hours at 37°C and are killed by heat, drying and chemical sterilization. Even if live trophozoites from freshly passed stools are ingested, they are rapidly destroyed in stomach and cannot initiate infection. Therefore, the infections is not
usually transmitted by trophozoites.

Trophozoites undergo encystment in the intestinal lumen. Encystment does not occur in the tissue or in feces outside the body. Precyst is smaller in size about 10 – 20 µm in size. It is round or oval in shape. The endoplasm is free of red blood cells and other ingested food particles (Figure 8.1). The nuclear structure retains the characteristics of the trophozoite.

Precyst secretes a highly refractive cyst wall around it and becomes a cyst. A mature cyst is a quadrinucleate spherical body. The cyst begins as a uninucleate body but soon divides by binary fission and develops into binucleate and quadrinucleate bodies (Figure 8.1). The cytoplasm of the cyst is clear and hyaline (translucent) and the nuclear structure retain the characteristic of the trophozoites. The mature quadrinucleate cyst, passed in the stool, does not undergo any further development and remain alive for several months in the soil or in environment where they were deposited. The mature quadrinucleate cysts are the infective forms of the parasite.

E. histolytica passes its life cycle only in one host, the human.

Mode of transmission:
Ingestion of food and water contaminated with cyst.

The cysts that are swallowed along with food and water enter into the alimentary canal. The cyst wall is resistant to action of gastric juice. The cysts pass through the stomach undamaged and enters the small intestine (Figure 8.2). 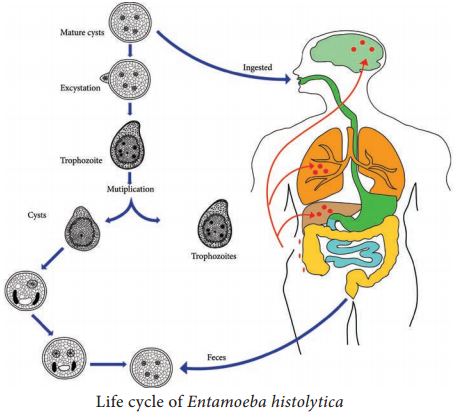 When the cyst reaches caecum or lower part of the ileum, due to alkaline medium, the cyst wall is damaged by trypsin leading to excystation.

The cytoplasm gets detached from the cyst wall and an amoeboid movement appear causing a tear in the cyst wall, through which quadrinucleate amoeba is liberated. This stage is called the metacyst.

The nuclei in the metacyst immediately undergo division to form 8 nuclei, each of which gets surrounded by its own cytoplasm to become 8 small amoebulae or metacystic trophozoites.

These metacystic trophozoites are carried to the caecum and colon. They invade the tissues and lodge in the submucous tissue of the large intestine which is their normal habitat.

Trophozoite grow and multiply by binary fission. The trophozoite phase of the parasite is responsible for producing the characteristic lesion of amoebiasis.

Some of the trophozoites in colon develop into precystic forms and cysts, which are passed in feces to repeat the cycle.

E. histolytica can live in the intestine without causing symptoms. But, they can also cause severe disease. These amoebas may invade the wall of the intestine leading to amoebic dysentery, an illness that causes intestinal ulcers, bleeding, increased mucus production and diarrhoea. The ulcers are strictly confined to the large intestine being most numerous in the caecum and next in the sigmoid-rectal regions.

The lesions may be generalized or localised. A typical amoebic ulcer varies from pin’s head to one inch or more in diameter in size. The shape of ulcer may be round or oval.

On vertical section, the ulcer appears like flask, with mouth and neck being narrow and base being large and rounded (Figure 8.3 shows the flask – shaped ulcer). The base of ulcer is generally formed by the muscular coat and filled up by the necrotic material. The ulcers generally do not extend deeper than submucosal layer. 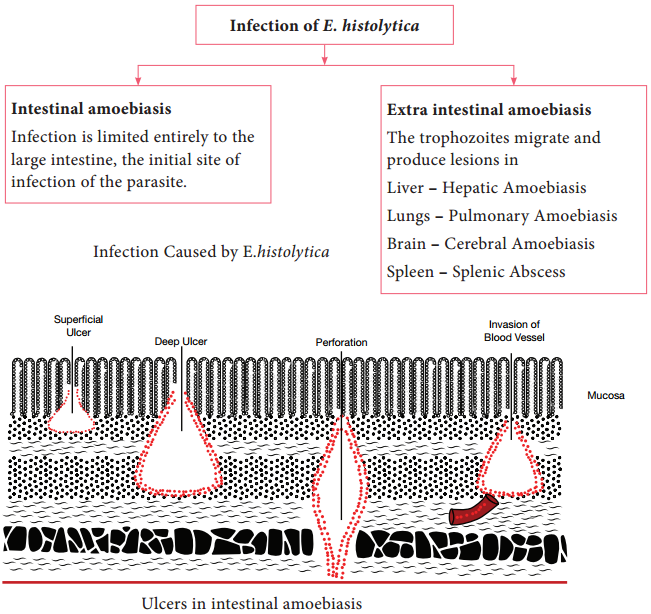 The typical manifestation of intestinal amoebiasis is amoebic dysentery. The symptoms are often quite mild and can include loose feaces, stomach pain and stomach cramping. In acute amoebic dysentery, the symptoms include abdominal pain, bloody stool, fever, tenderness, rectal tenesmus and hepatomegaly (enlargement of liver). 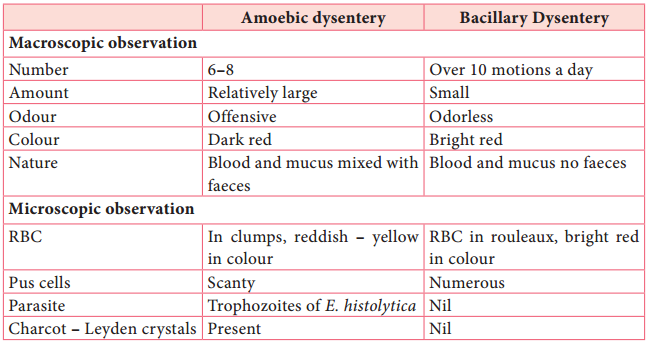 This is the most common form of extra intestinal invasive amoebiasis. Liver abscess may be multiple or more often solitary, usually located in the upper right lobe of the liver (Figure 8.4). Amoebic liver abscess (ALA) contains an odour less and thick chocolate brown pus called anchovy sauce pus.

ALA is associated with an abrupt onset of high fever, right upper abdominal pain and tenderness. Anorexia (loss of appetite for food), nausea (the sensation to vomit), vomiting, fatigue (extreme tiredness) and weight loss are also frequent.

It is very rare, but this may occur by direct hematogenous spread from the colon. The patient presents with severe chest pain and have dyspnoea (shortness of breath). The sputum of patient is chocolate brown. Amoebic trophozoites may be demonstrated in the sputum.

The condition is unusual. In cerebral amoebiasis, the abscess is single, small and is located in the cerebral hemisphere. The patient may die of rupture or involvement of cerebellam within 12-72 hours. Biopsy of the brain shows the amoebic trophozoites.

It can be caused by perforation of an amoebic abscess or surgical wound infected with amoebae. It is less frequent condition. 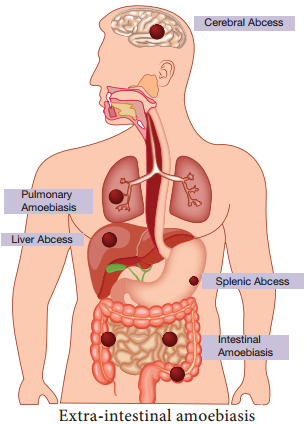 Specimens:
Stool is the specimen of choice. Other specimens collected includes blood, rectal exudates and rectal ulcer tissue collected from the base by endoscopies.

Methods in examination of stool

Demonstration of mature quadrinucleate cysts or trophozites in stool is diagnostic of intestinal amoebiasis. The wet mount of stool is prepared in the saline, iodine or lacto phenol cotton blue.

B. Examination of stool after concentration:

Demonstration of amoebic cysts by Formalin – ether is the method of choice.

Amoebic liver abscess (ALA):
Demonstration of amoebic trophozoites in the aspirated liver pus establishes the diagnosis of ALA.

Molecular diagnosis:
PCR (Polymerase chain reaction) is employed to detect amoebic genome in the aspirated liver pus for the diagnosis of ALA.

Metronidazole is the drug of choice which acts as both luminal and tissue amoebicides. It is low in toxicity and is effective against intestinal as well as extra -intestinal amoebic infections.