You can also practice NCERT Solutions for Class 6 Geography Chapter 4 Questions and Answers on LearnInsta.com.

Question 1.
What is a map?
Answer:
A map is a representation or a drawing of the Earth’s surface or a part of it drawn on a flat surface according to a scale.

Question 2.
What is Atlas?
Answer:
A collection of many maps in the form of book is called an Atlas.

Question 3.
Name the types of maps.
Answer:
Maps are of different types such as Physical Maps, Political Maps, Thematic Maps.

Question 4.
Name the components of maps.
Answer:
There are three component of maps- (i) distance (ii) direction and (iii) symbol

Question 5.
Why is scale needed in the map formation?
Answer:
A scale is needed to represent a large distance in a small distance on paper.

Question 6.
What is scale?
Answer:
Scale is the ratio between the actual distance and the distance shown on the map.

Question 7.
What are the Direction Maps?
Answer:
Direction maps help us to find out a place.

Question 11.
What is compass?
Answer:
Compass is a magnetic instrument. It is used to find out directions.

Question 13.
Why do we use colours on the maps?
Answer:
Different colours are used on the map for presenting different things or objects.

Question 14.
What is a sketch?
Answer:
Sketch is a drawing mainly based on memory and spot observation and not according to scale.

Question 15.
What is a plan?
Answer:
Plan is a drawing of a small area on a large scale.

Question 1.
How are maps useful for us?
Answer:
Maps are useful to us for various purposes. One map shows a small area and a few facts. Another map may contain as many facts as a big book. The purposes can be summarized as under:

Question 2.
What do you understand about Small Scale Maps?
Answer:
When large areas like continents or countries are to be shown on a paper, then we use a small scale and it is called a small scale map. In the small scale map, we use large distances like hundreds of km in some cm. or mm.

Question 3.
What do you mean by Large Scale Maps?
Answer:
When a small area like village or town is to be shown on paper, then we use a large scale and it is called large scale map. In the large scale map we use distance of metres in some cm. or mm.

Question 4.
What is compass and how does it work?
Answer:
Compass is a magnetic instrument. We can find out the direction of a place with the help of a compass. It is used to find out directions. It has a magnetic needle which always points towards north-south direction.

Question 5.
Why are symbols used?
Answer:
Everything or every object cannot be represented on the paper. For this purpose, symbols are used. Symbol contains letters, shades, colours, pictures, lines etc.

Question 7.
What are the uses of colours in the maps?
Answer:
Various colours are used in the map for presenting things or objects. For example, blue is used for showing water bodies, brown for mountain, yellow for plateau and green for plains.

Question 1.
Describe different types of Maps.
Answer:
The maps are used for various purposes. One map shows a small area and a few facts. Another map may contain as many facts as a big book. When many maps are put together we get an Atlas. There are different types of maps; some of them are described below:

Question 2.
What are the components of Maps? Describe them.
Answer:
There are three components of Maps:
(i) Distance: Distance is an important component for those maps which are drawn to show the distance between the places. The actual distance between the places or objects can be measured by the map. To show the actual distance on the paper is a sensitive work and hence it is done very carefully. In this process, we choose a scale.

Suppose, we have to show distance between the Government School and Hospital of a village; distance between both is 500 metres. We will have to opt for a scale, that may be 200 metres = 1 cm. Therefore, the distance on map will be shown 2.5 cm. When there are large areas such as hundreds of km or thousands of km, we will have to choose a scale. Suppose, 100 km = 1 cm or 1mm etc. The scale is chosen in view of map’s size.

(ii) Direction: Direction is also an important component for the maps. The accurate directions make the maps useful which is made for the same purpose. On the upper right comer of the maps symbol of arrow marked with the letter ‘N’ is represented. There are four major directions-North, South, East and West. These are called cardinal points. Other four intermediate directions are – North- East(NE), South-East(SE), South-West (SW), and North-West (NW). These intermediate directions help us to locate any place more accurately.

(iii) Symbols: Third important component of maps is symbol. It is not possible to show each and every thing on the maps, hence many things or objects or places are shown with the help of symbols. We can show Railway Line, Roads, Boundary, Rivers, Temples, Post office, Police Station, Settlements, Graveyard, forest areas, trees, grass etc., with the help of symbols.

One of the important features of the maps is that the maps have universal language that can be understood by all. There is an international agreement regarding the use of these symbols. These are called conventional symbols. 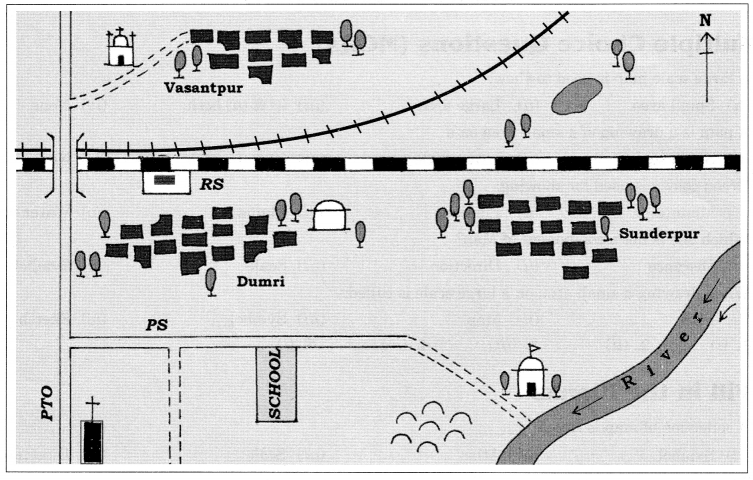 Question 2.
Look the picture carefully given below and find out: 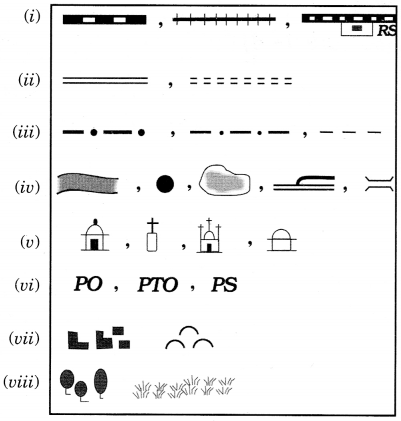