You can also practice NCERT Solutions for Class 6 Geography Chapter 2 Questions and Answers on LearnInsta.com.

Question 1.
What is the advantage of the globe?
Answer:
Globe is true model of the Earth. It depicts the whole Earth in small size. Globe provides us facility for the study of the Earth in easy way.

Question 2.
How does latitudes and longitudes help us?
Answer:
These help us to find out location on the Earth.

Question 3.
In which zone did the equator lie?
Answer:
Equator lies in the Torrid zone.

Question 4.
What is use of the Greenwich?
Answer:
Greenwich is used as a standard for time all over the world.

Question 6.
Where does Tropic of Capricorn lie?
Answer:
23 W S.

Question 8.
How much time is required for the Earth for 1° rotation?
Answer:
Four hours.

Question 9.
Where is India located on the Globe?
Answer:
India is located east of Greenwich at 82°30 E.

Question 10.
By how much time is India ahead from Greenwich?
Answer:
5 hours 30 minutes.

Question 11.
How many zones has the Earth been divided?
Answer:
The Earth has been divided into 24 time zones.

Question 12.
In how many zones has the Earth been divided?
Answer:
24 time zones.

Question 1.
Define Longitude.
Answer:
These are lines drawn on the globe by joining North Pole and South Pole. These lines run from north to south.

Question 1.
Describe in brief the importance of parallels of latitudes.
Answer:
Equator:
An imaginary line running on the globe divides it into two equal parts. This is line which situated at 0° on the globe. Equator is surrounded by the Torrid Zone. In other words equator has its position in the middle of the Torrid Zone and this divided the Torrid Zone into two parts and expanded in north and south upto 23 V20 N & 23 V20 S.

Tropic of Cancer:
The Tropic of cancer line lies on 23 V20 N in the northern hemisphere. This area is expanded upto 66 V20 N. This area indicates about moderate temperature.

Tropic of Capricorn:
It is the parallel of 23 V20 S in the southern hemisphere.

Arctic Circle:
It lies at 66 V20 north of the equator.

Antarctic Circle:
It lies at 66 V20 south of the equator.

3. Frigid zone: Frigid zones are cold zones. Beyond the Arctic Circle and Antarctic Circle temperatures are very low and thus climate is very cold. This is due to the extreme slanting’s of the Sun’s rays.

Question 3.
How does longitudes help us to calculate the time?
Answer:
Time is measured by the movement of the Earth. The Earth is rotated on its axis. For one rotation, it takes 24 hours, it means the Earth is rotated 360° in 24 hrs. It means 15° in a hour or 1° in 4 minutes. Accordingly, the Earth has been divided into 24 time zones of one hour each. 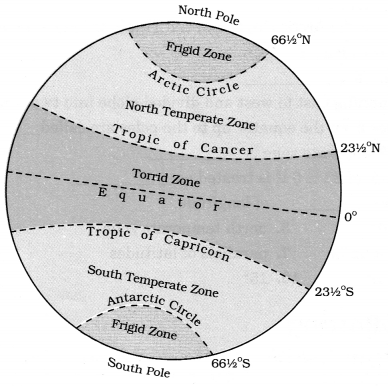