Here we are providing Class 11 chemistry Important Extra Questions and Answers Chapter 9 Hydrogen. Chemistry Class 11 Important Questions are the best resource for students which helps in Class 11 board exams.

Question 2.
What are the constituents of water gas?
Answer:
Carbon monoxide and hydrogen.

Question 4.
Which isotope of hydrogen
(i) does not contain neutron
Answer:
Protium

Question 5.
Out of the following metals which can be used to liberate H2 gas on reaction with dil. hydrochloric acid?
(i) Cu,
(ii) Zn,
(iii) Iron,
(iv) Silver,
(v) Magnesium.
Answer:
Only Zn, Fe, Mg.

Question 6.
Name one compound each of hydrogen in which it exists in:
(i) Positive oxidation state
Answer:
HCl

Question 7.
What is the importance of heavy water in nuclear power generation?
Answer:
It is used as a moderator in nuclear reactions to slow down the speed of fast-moving neutrons.

Question 10.
Why is H2O2 concentrated at low pressure?
Answer:
Because it decomposes at ordinary pressure or on heating.

Question 14.
Name the compounds which retard the decomposition of H2O2.
Answer:
Acetanilide, glycerol.

Question 15.
Which is heavier out of ice and water?
Answer:
Water.

Question 16.
What is the trade name of hydrogen peroxide used as an antiseptic?
Answer:
Perhydrol.

Question 17.
What is the significance of H2O2 labelled as 30 volumes’?
Answer:
“30 volume” labelled hydrogen peroxide means that 1 mL of this sample of solution gives 30 mL of oxygen gas at STP.

Question 19.
What is the cause of the temporary hardness of water?
Answer:
Presence of Ca(HCO3)2 and Mg(HCO3)2 in water.

Question 20.
How is the temporary hardness of water removed?
Answer:
By boiling and filtering.

Question 21.
How is heavy water produced from ordinary water?
Answer:
By repeated electrolysis of ordinary water containing 3 % of NaOH in it.

Question 23.
Define hard water.
Answer:
Hard water is one that does not produce lather with soap solution readily.

Question 24.
Which isotope of hydrogen contains an equal number of protons and neutrons?
Answer:
Deuterium.

Question 26.
Name the phenomenon of absorption of hydrogen by palladium?
Answer:
Occlusion.

Question 28.
Name one example of a reaction in which hydrogen acts as an oxidizing agent.
Answer:
The reaction of hydrogen with active metals
2Na + H2 → 2NaH .

Question 33.
Why is dihydrogen not preferred in balloons these days?
Answer:
Dihydrogen is a highly combustible gas and hence is likely to catch fire in presence of excess air.

Question 35.
Although D2O resembles H2O chemically, yet it is toxic. Explain.
Answer:
D2O is toxic since D+ ions react at a much slower rate than H+ in enzyme catalysed reactions.

Question 36.
Is it correct to say that hydrogen can behave as a metal? State the conditions under which such behaviour can be possible.
Answer:
Yes. H2 can act as a metal under very high pressures.

Question 37.
Give two advantages of using hydrogen as a fuel over gasoline.
Answer:
The high heat of combustion and production of no pollutants like SO2, NO2, CO2, etc.

Question 38.
What happens when chloroform is treated with heavy water in presence of an alkali?
Answer:

Question 39.
What is hydrolith? How is it prepared?
Answer:
Hydrolith is a calcium hydride (CaH2). It can be prepared by

Question 45.
Can marine species live in distilled water?
Answer:
No, because distilled H2O does not contain dissolved oxygen.

Question 46.
Can distilled water be called deionised water?
Answer:
Yes. Distilled water does not contain any cations and anions.

Question 49.
Name a process that can remove both temporary and permanent hardness of the water.
Answer:
Pemiutit process.

Question 1.
Hydrogen forms three types of bonds in its compounds. Describe each type of bonding using suitable examples.
Answer:
Hydrogen forms compounds in three different ways:
1. By loss of electrons as in the reactions of H2 with CuO

2. By gain of electrons as in reactions of H2 with metals.

3. By sharing of electrons as in the reactions of H2 with halogens

Here Na has been oxidized to Na while dihydrogen has been reduced to H+ ion.

Here CuO has been reduced to copper and H2 has been oxidized to H2O.

Question 3.
The process \(\frac{1}{2}\) H2(g) + e– → H– (g) is endothermic (DH = +151 kJ mol-1), yet salt- like hydrides are known. How do you account for this?
Answer:
This is due to the reason that high lattice energy released (energy released during the formation of solid metal hydride from their corresponding gaseous ions, i.e., M+ and H+) more than compensates the energy, needed for the formation of H– ions from H2 gas.

Question 6.
Anhydrous Ba02 is not used for preparing H2O2 Why?
Answer:
BaSO4 formed during the reaction of BaO2 with H2SO4 forms a protective layer around unreacted BaO2 and the reaction stops after some time.

On the treatment of such blackened statues with H2O2, the black PbS gets oxidised to PbSO4 and the colour is restored.
PbS + 4H2O2 → PbSO4 + 4H2O.

Question 13.
What is water gas? How is it prepared?
Answer:
An equimolar mixture of CO and H is called water gas. It is prepared by passing steam over a red hot iron.

Question 14.
The boiling point of H2O is higher than that of H2S. Explain.
Answer:
Due to intermolecular H-bonding in H2O2 extra energy in the form of heat is required to break these H-bonds due to which H2O boils at a higher temperature than H2S which does not have H-bonding.

Question 17.
What is the difference between hydrolysis and hydration?
Answer:
Interaction of H+ ions and OH– ions of H2O with anions and cations of the salt respectively to give an acidic or a basic solution is called hydrolysis. For example:

Hydration,.on the other hand, means the addition of water to ions or molecules to form hydrated ions or hydrated salts. For examples:

Question 19.
Discuss the importance of heavy water in a nuclear reactor.
Answer:
Heavy water is used as a moderator in nuclear reactors because it slows down the fast-moving neutrons & therefore helps in controlling the process of nuclear fission. It has also been used as a tracer compound to study the mechanism of many chemical reactions.

(b) Temporary hardness & permanent hardness of the water.
Answer:

Question 21.
Explain the correct context in which the following terms are used:
(a) diprotium
Answer:
Diprotium: It is used for the correct term for Hr

(b) dihydrogen
Answer:
Dihydrogen: The term dihydrogen is used for the H2 molecule while referring to the isotopic mixture with natural abundance for H & D.

(d) hydrogen
Answer:
Hydrogen: It is used in relation to the isotope.

Question 23.
Why do lakes freeze from the top to the bottom?
Answer:
There are intermolecular hydrogen bonding in H2O molecule. The density of water is greater than ice. It may be noted that at 4°C water has maximum density. In the severe cold, the upper layer of the seawater freezes & the heavier water (density more than that of ice) is present below the surface of the ice. Due to this sea animals can live safely in the water.

Question 27.
Explain how is dil. solution of hydrogen peroxide concentrated?
Answer:
Hydrogen peroxide is concentrated by its distillation under reduced pressure at a temperature below 333K & the absence of heat metal impurities. 90% H2O2 is obtained by this method. For further concentration, the solution is cooled to about 263K when crystals enriched in hydrogen peroxide separate out. This process of fractional crystallisation is repeated to get 100% H2O2

(ii) Sodium peroxide is treated with cold dilute H2SO4 & the resulting mixture is cooled below 273 K.
Answer:
H2O2 is obtained:

Question 30.
Why is water an excellent solvent for ionic or polar substances?
Answer:
Water is a polar solvent with a high dielectric constant. Due to the high dielectric constant of water, the coelomic force of attraction between cations & anions gets weakened. Thus, a water molecule is able to remove ions from the lattice site using ion dipole forces easily. The dissolution of ionic/polar substances in water is further favoured by the hydrations of ions by the water molecule.

The main point of differences are:

(b) What is (i) active hydrogen
Answer:
Active Hydrogen: It is obtained by subjecting a stream of molecular hydrogen at ordinary temperature to silent electric discharge at about 30,000 volts. It is very reactive in nature (half-life = 0.33 second, and combines directly at ordinary temperatures with Pb and S forming their hydrides

(ii) heavy hydrogen? How are they formed?
Answer:
Heavy hydrogen: It is manufactured by the electrolysis of heavy water containing a little of IT SO, or NaOH to make the solution conducting.

Question 2.
How is the solution of H2O2 concentrated?
Answer:
The concentration of hydrogen peroxide: Hydrogen peroxide obtained by any method is always in the form of a dilute solution. Great care is to be taken for concentrating its solution because it is unstable and decomposes on heating.
2H2O2 → 2H2O + O2

The decomposition of H2O2 is catalysed by the ions of heavy metals present as impurities. 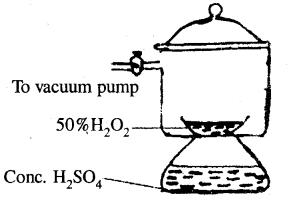 (Concentration of H2O2 in vacuum desiccator)

Hydrogen peroxide cannot be concentrated by distillation at ordinary pressure because it undergoes decomposition into water and oxygen as it is a highly unstable liquid. It decomposes even on long-standing or on heating.

Question 3.
What are the different methods used for the softening of hard water? Explain the principle of each method.
Answer:
Hard water can be softened by the following methods depending upon the nature of hardness.
(a) Temporary hardness:
1. By boiling: It can be removed by merely boiling the water. Boiling decomposes the bicarbonates to give carbon dioxide and insoluble carbonates, which can be removed by filtration.

(b) Permanent hardness:
1. With sodium carbonate: On treatment with washing soda, Ca2+ and Mg2+ in hard water are precipitated. The precipitate of the insoluble carbonates thus formed is removed by filtration.

when all the sodium ions of the zeolite have been replaced, the zeolite is said to be exhausted. It can be regenerated by treatment with a strong solution of sodium chloride.
2Na + (Ze)2Ca → 2ZeNa + Ca2+.

Question 4.
Show how hydrogen peroxide can function both as an oxidising and a reducing agent.
Answer:
Oxidising properties: H2O2 has a tendency to accept electrons in chemical reactions and thus behaves as an oxidising agent in both acidic and alkaline medium.
H2O2 → H2O + O
In acidic medium
H2O2 + 2H+ + 2e– → 2H2O

Reducing properties: H2O2 can give electrons in a few reactions and thus behaves as a reducing agent.
In acidic medium
H2O2 → O2 + 2H+ + 2e–

Question 1.
Calculate the percentage strength & strength in g/L of 10 volume hydrogen peroxide solution.
Answer:
H2O2 decomposes on heating according to the equation:

Step-II: To calculate the equivalent wt. of H2O2 consider the chemical equation,

Question 6.
Calculate the strength in volumes of a solution containing 30.36 g/litre of H2O2.
Answer: