Students who are going to appear for CBSE Class 12 Examinations are advised to practice the CBSE sample papers given here which is designed as per the latest Syllabus and marking scheme as prescribed by the CBSE is given here. Paper 3 of Solved CBSE Sample Paper for Class 12 Physics is given below with free PDF download solutions.
Time Allowed : 3 Hours
Max. Marks : 70
General Instructions 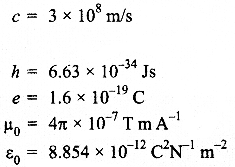 Question 1.
If the angle between the pass axis of polarizer and the analyser is 45°, write the ratio of the ‘ intensities of original light and the transmitted light after passing through the analyser.

Question 2.
You are given following three lenses. Which two lenses will you use as an eyepiece and as an objective to construct an astronomical telescope?

Question 4.
What is sky wave propagation?

Question 5.
Magnetic field lines can be entirely confined within the core of a toroid, but not within a straight solenoid. Why?

Question 6.
The figure shows a plot of three curves a, b, c, showing the variation of photocurrent v/s collector plate potential for three different intensities I1 I2 and I3 having frequencies v1 v2 and v3 respectively incident on a photosensitive surface. Point out the two curve for which the incident radiations have same frequency but different intensities. 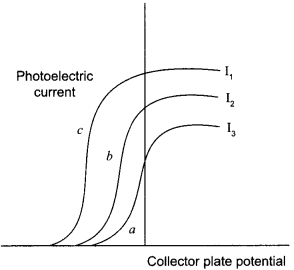 Question 7.
What type of wavefront will emerge from a
(i) point source, and
(ii) distant light source?

Question 8.
Two nuclei have mass numbers in the ratio 1 : 2. What is the ratio of their nuclear densities?

Question 9.
A cell of emf ‘E’ and internal resistance ‘V’ is connected across a variable resistor ‘R’ Plot a graph showing the variation of terminal potential ‘V’ with resistance R. Predict from the graph the condition under which ‘V’ becomes equal to ‘E’.

Question 11.
A radioactive nucleus ‘A’ undergoes a series of decays according to the following scheme :

The mass number and atomic number of A are 180 and 72 respectively. What are these numbers for A4 ?

Question 12.
An electron and a proton are accelerated through the same potential. Which one the two has
(i) greater value of de Broglie wavelength associated with it and
(ii) less momentum? Justify your answer.

Question 13.
By what percentage will the transmission ranges of TV tower be affected when the height of the tower is increased by 21 %?

Question 14.
Derive an expression for drift velocity of free electrons in a conductor in terms of relaxation time.

Question 15.
In a single slit diffraction experiment, when tiny circular obstacle is placed in the path of light from a distant source, a bright spot is seen at the centre of the shadow of the obstacle. Explain why? State two points of difference between the interference pattern obtained in Young’s double slit experiment and the diffraction pattern due to a single slit.

Question 16.
A thin conducting spherical shell of radius R has charge Q spread uniformly over its surface. Using Gauss’s law, derive an expression for an electric field at a point outside the shell. Draw a graph of electric field E(r) with distance r from the centre of the shell for 0 ≤ r ≤ ∝.

Question 17.
Why are high frequency carrier waves used for transmission?

What is meant by term modulation’? Draw a block diagram of a simple modulator for obtaining an AM signal.

Question 18.
Three identical capacitors C1, C2 and C3 of capacitance 6 μF each are connected to a 12 V battery as shown : 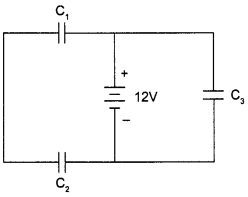 Question 19.
(a) The energy levels of an atom are as shown below. Which of them will result in the transition of a photon of wavelength 275 nm?

(b) Which transition corresponds to emission of radiation of maximum wavelength?

Question 20.
(a) Define self inductance. Write its S.I. units.
(b) Derive an expression for self inductance of a long solenoid of length l, cross-sectional area A having N number of turns. 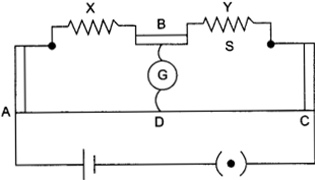 Explain the principle and working of a cyclotron with the help of a schematic diagram. Write the expression for cyclotron frequency.

Questin 23.
Shivani was interested to gift something to her mother on her birthday. But she could not decide what to give her mother.She asked her brother. Her brother advised to gift a microwave oven to the mother. But their father said it is a wastage of money. They convinced him for a microwave and ultimately her father was agreed for microwave.

Question 24.
(i) Draw a circuit diagram to study the input and output characteristics of an n-p-n transistor in its common emitter configuration. Draw the typical input and output characteristics.
(ii) Explain, with the help of a circuit diagram, the working of n-p-n transistor as a common emitter amplifier.

How is a zener diode fabricated so as to make it a special purpose diode? Draw I-V characteristics of zener diode and explain the significance of breakdown voltage. Explain briefly, with the help of a circuit diagram, how a p-n junction diode works as a half wave rectifier

Question 25.
Trace the rays of light showing the formation of an image due to a point object placed on the axis of a spherical surface separating the two media of refractive indices n1 and n2. Establish the relation between the distances of the object, the image and the radius of curvature from the central point of the spherical surface. Hence derive the expression of the lens makers formula.

Question 26.
(a) Derive an expression for the average power consumed in a series LCR circuit connected to a.c. source in which the phase difference between the voltage and the current in the circuit is Φ.
(b) Define the quality factor in an a.c. circuit. Why should the quality factor have high value in receiving circuits? Name the factors on which it depends.

(i) Derive the relationship between the peak and the rms value of current in an a.c. circuit.
(ii) Describe briefly, with the help of labelled diagram, working of a step-up transformer. A step-up transformer converts a low voltage into high voltage. Does it not violate the principle of conservation of energy? Explain. 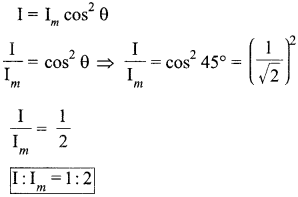 Answer 2.
For constructing an astronomical telescope, the objective should have the maximum diameter. Of the three lenses given, L1 has the maximum diameter so, use lens L1 as an objective. The eyepiece should have the highest power for better magnification. Therefore, we use lens L3 as an eyepiece.
Answer 3.
The given electromagnetic waves can be arranged in ascending order with respect to their frequencies as :
Radio waves < Microwaves < UV rays < X-rays
Answer 4.
The type of propagation in which radio waves are transmitted towards the sky and are reflected by the ionosphere towards the desired location on earth is called sky wave propagation.
Answer 5.
Magnetic field lines form closed loops around a current – carrying wire. The geometry of a straight solenoid is such that magnetic field lines cannot loop around circular wires without spilling over to the outside of the solenoid. The geometry of a toroid is such that magnetic field lines can loop around electric wires without spilling over to the outside. Hence, magnetic field lines can be entirely confined within the core of a toroid, but not within a straight solenoid.

Answer 6.
The stopping potential increases with increasing frequency of radiations. Thus curves a and b have the same frequency but different intensities.
Answer 7.
(i) For a point source, wavefront will be spherical,
(ii) For a distant light source, the wavefronts will be plane. 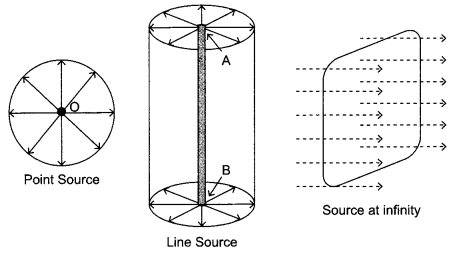 V becomes equal to E when no current flows through the circuit. 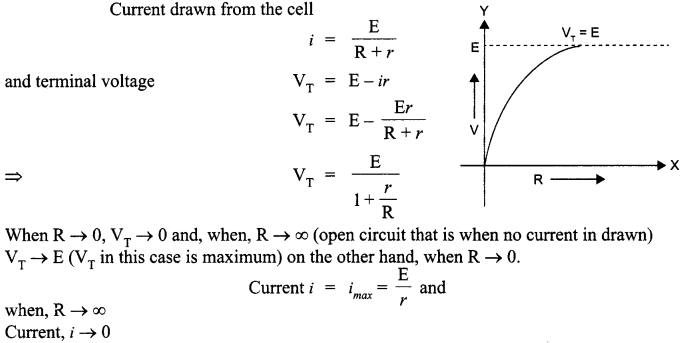 Answer 10.
(i) Two equipotential surfaces cannot intersect with each other because when they will intersect,then at a point the electric field will have two directions, which is not possible.
(ii) Potential at P (7, 0, 0)

Answer 12.
(i) The de Broglie wavelength associated with potential V is 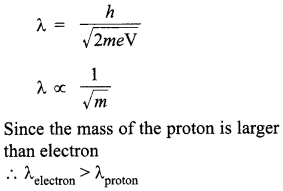 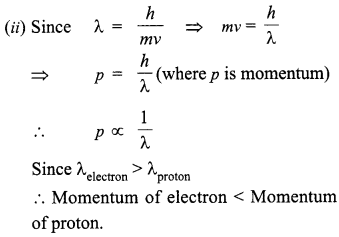 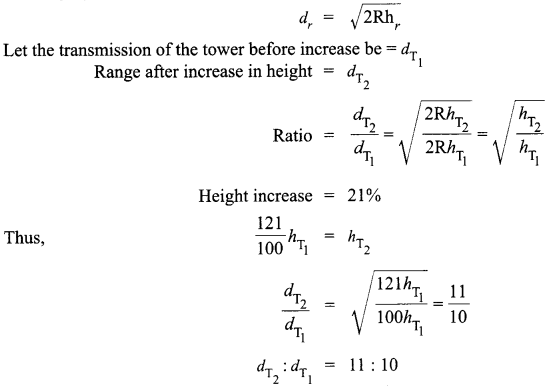 For all the electrons in the conductor, average value of v. is zero. The average of vt is vd or drift velocity. This is the average velocity experienced by an electron in an external electric field. There is no fixed time after which each collision occurs. Therefore, we take the average time after which one collision takes place by an electron.
Let this time, also known as relaxation time, be t. Substituting this in equation (1)

Then, Negative sign shows that electrons drift opposite to the applied field.

Answer 16.
According to Gauss law,

Where, q is the point charge,
E is electric field due to the point charge,
dA is a small area on the Gaussian surface at any distance,
e0 is the proportionally constant.
For a spherical shell at distance r from the point charge, the integral § dA is merely the sum of all differential of dA on the sphere.
Therefore,

Therefore, for a thin conducting spherical shell of radius R and charge Q, spread uniformly over its surface, the electric field at any point outside the shell is

The graph of electric field E(r) with distance r from the centre of the shell for 0 ≤ r ≤ ∝.

Answer 17.
For transmitting a signal, the antenna should have a size comparable to the wavelength of the signal (atleast λ/4 in dimension), where λ is the wavelength. If the frequency of the signal is small, then its wavelength becomes very large and it is impractical to make those large antennas for the corresponding large wavelengths. For higher frequencies, wavelength is smaller, which is the reason why high frequency carrier waves are used for transmission.

Answer 18.
Existing diagram can be redrawn as follows : 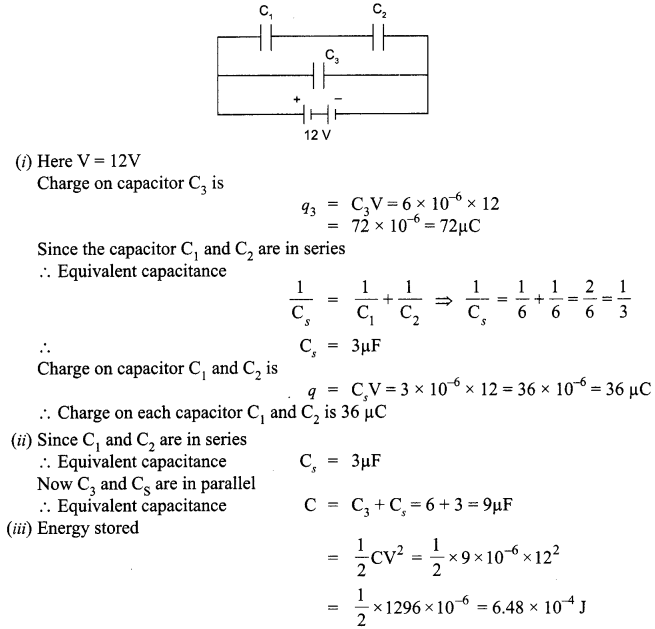 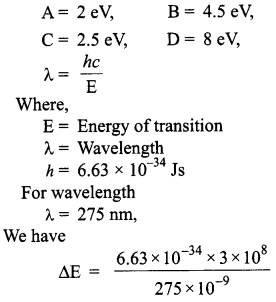 Answer 20.
(a) The phenomenon in which emf is induced in a single isolated coil due to change of flux through the coil by means of varying the current through the same coil is called self inductance. S.I. unit of inductance is henry (H).
(b) Magnetic field B inside a solenoid carrying a current i is B = μ0 n i
Let n be the number of turns per unit length. 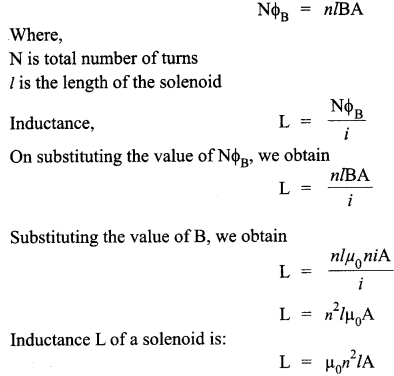 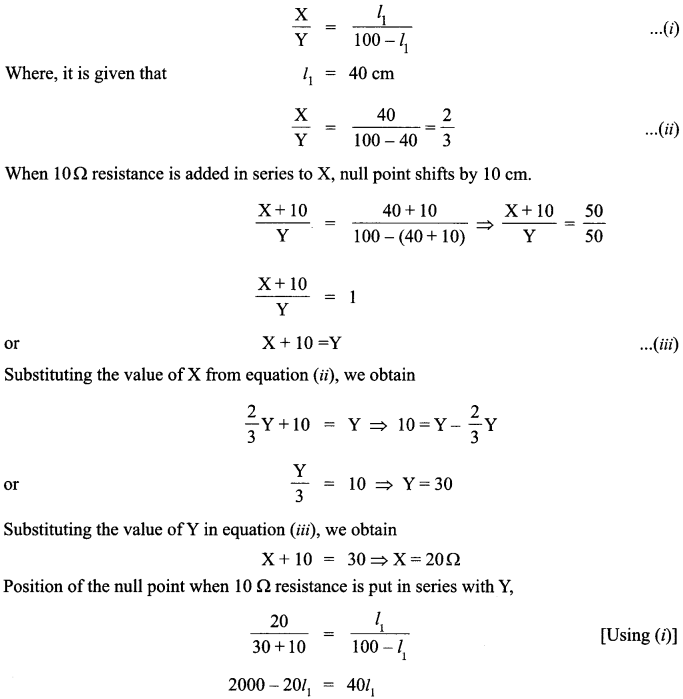 1 ampere is the value of that steady current which when maintained in each of the two very long, straight, parallel conductors of negligible cross-section and placed one metre apart in vacuum, would produce on each of these conductors a force equal to 2 x 10-7 Newton per metre of length. 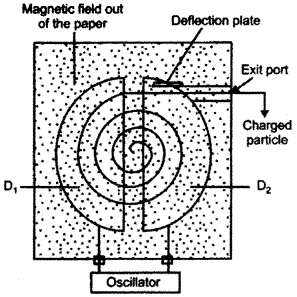 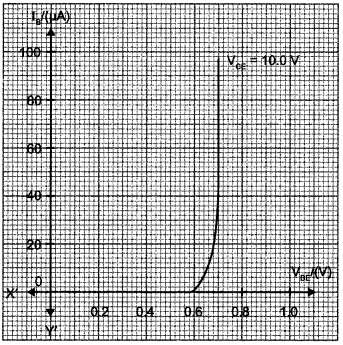 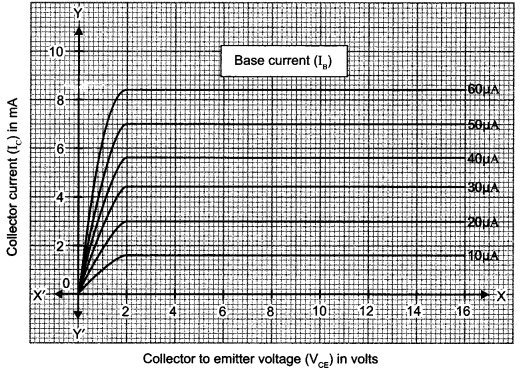 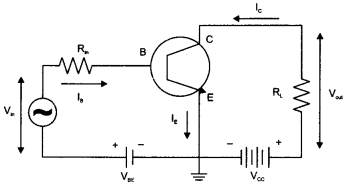 During the negative half cycle of the input, the forward bias is decreased resulting in decrease in IE and hence Ic. Thus Vcc would increase making the collector more positive. Hence in a common-emitter amplifier, the output voltage is 180° out of phase with the input voltage. 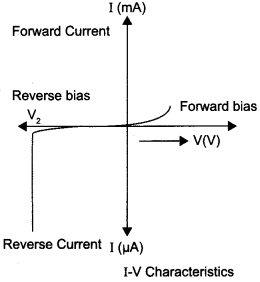 Zener has a sharp breakdown voltage and this property of zener is used for voltage regulation. 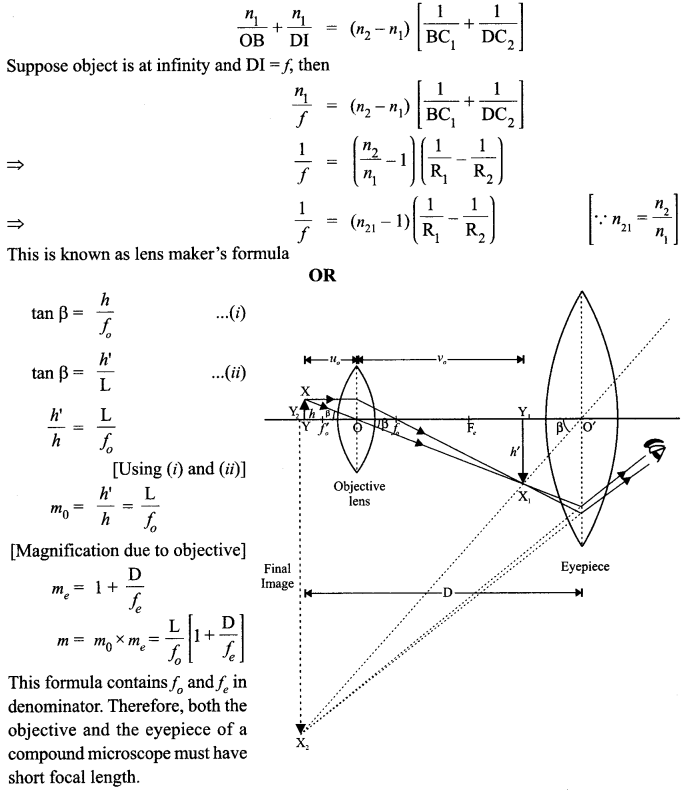 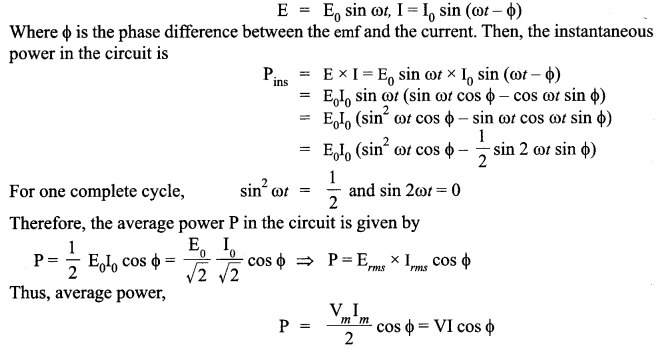 (b) Quality Factor :
It is defined as the ratio of the voltage drop across inductor or capacitor to the applied voltage.

(a) The instantaneous power dissipated in the resistor is 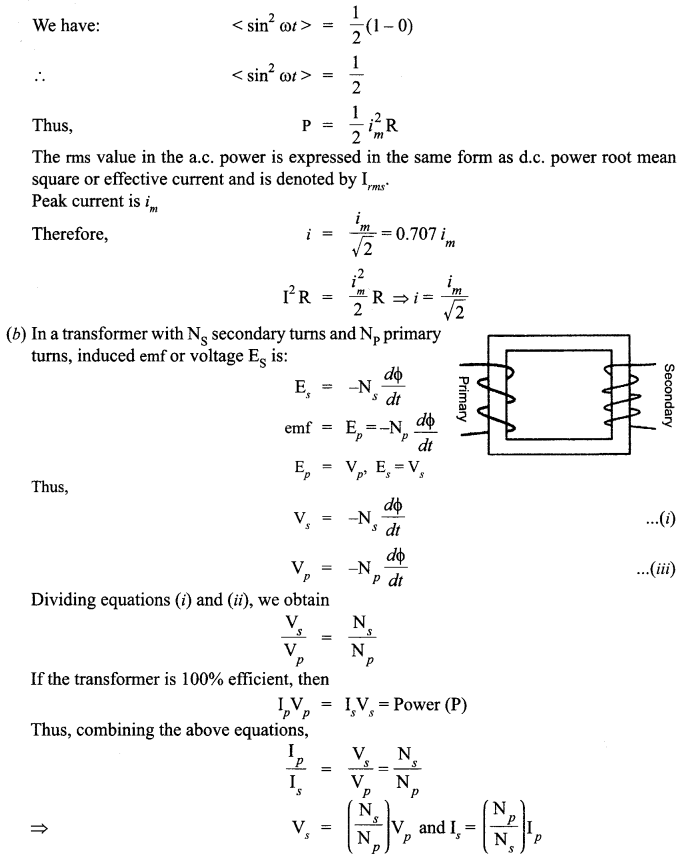 No, a step-up transformer steps up the voltage while steps down the current. So input and output power remains same, provided there is no loss. Hence, there is no violation of principle of conservation of energy.