Students can access the CBSE Sample Papers for Class 10 English with Solutions and marking scheme Set 5 will help students in understanding the difficulty level of the exam.

1. This paper is divided into two parts: A and B. All questions are compulsory.
2. Separate instructions are given with each section and question, wherever necessary. Read these instructions very carefully and follow them.
3. Do not exceed the prescribed word limit while answering the questions.

Reading (20 Marks)
Question 1.
Read the passage given below. (10 Marks)
1. One day Gandhiji and Vallabhbhai Patel were talking in the Yeravda jail when Gandhiji remarked, “At times even a dead snake can be of use.” And he related the following story to illustrate his point: Once a snake entered the house of an old woman. The old woman was frightened and cried out for help. Hearing her, the neighbours rushed up and killed the snake. Then they returned to their homes. Instead of throwing the dead snake far away, the old woman flung it onto her roof.

3. One day a bania found a snake in his house. He could not find anyone to kill it for him and had not the courage to kill it himself. Besides, he hated killing any living creature. So, he covered the snake with a pot and let it there.

4. As luck would have it, that night some thieves broke into the bania’s house. They entered the kitchen and saw the overturned pot. “Ah”, they thought, “the bania has hidden something valuable here.” As they lifted the pot, the snake struck. Having come with the object of stealing, they barely left with their lives.

5. Once he came out of jail, Gandhiji went from city to city, village to village collecting funds for the Charkha Sangh. During one of his tours, he addressed a meeting in Orissa.

6. After his speech a poor old woman got up. She was bent with age, her hair was grey and her clothes were in tatters. The volunteers tried to stop her, but she fought her way to the place where Gandhiji was sitting. “I must see him,” she insisted, and going up to Gandhiji, she touched his feet.

8. The Charkha Sangh funds were under the charge of Jamnalal Bajaj. He asked Gandhi for the coin but Gandhi refused.

Question 2.
Read the passage given below: (10 Marks)
1. Man suffers from a distorted complex. He always considers animals as inferior beings only fit for exploitation. Man has been using domestic and wild animals for his selfish ends. Many animal lovers joined together to form the ‘Society for Prevention of Cruelty to Animals’.

2. The society has been working for the well-being and welfare of animals for many years. Its main aim is to change the attitude and thinking of people towards animals. It is quite sad that animals continue to be ill-treated, tortured and killed according to the whims of the people. About 15% of the people entertain the belief that animals are man’s slaves. They use, misuse and torture them accordingly. About 50% of the people exploit animals for selfish ends. 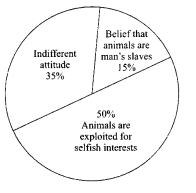 3. Horses and oxen are used for transport, carrying loads and in agricultural activities. Dogs, cats and many birds are domesticated for fun, entertainment and convenience. Wild animals like elephants, tigers, lions and deer are victims of poaching and killing. Animals are forced to do acrobatic feats in circus shows. Unfortunately, about 35% of people don’t think about the animals at all. They are totally indifferent to them.

4. The Government and the animal lovers must work together to bring a change in the attitude of the people. Animals should not be killed and poached for fun, furs or financial gains. They should be treated with kindness, care and sympathy. Cruelty towards animals must be legally punished.
On the basis of your understanding of the passage, answer any ten questions from the twelve that follow. (10 × 1 =10)
(i) In the line “………..-fit for exploitation”, the word ‘exploitation’ does not refer to:
(a) abuse
(b) ill-treatment
(c) oppression
(d) utilisation
Answer:
(d) utilisation

(vii) ‘ Society for Prevention of Cruelty to Animals ’ aims to change the attitude of man towards:
(a) other people
(b) animals
(c) plants
(d) society
Answer:
(b) animals

(v) The extract uses the phrase, ‘flew away’. Which of these expressions is incorrect with
respect to the word ‘flew’?

B. “I am sure that none of the boys and girls in Room Thirteen would purposely and deliberately hurt anyone’s feelings because his or her name happened to be a long, unfamiliar one.” “I prefer to think that what was said was said in thoughtlessness. I know that all of you feel the way I do, that this is a very unfortunate thing to have happened – unfortunate and sad, both. And I want you all to think about it.”
(i) What was said was said in:
(a) a thoughtful manner
(b) a casual manner
(c) in a deliberate manner
(d) thoughtlessness manner
Answer:
(d) thoughtlessness manner

(v) Which word does ‘thoughtlessness’ NOT correspond to?
(a) Inconsiderate
(b) Careful
(c) Uncaring
(d) Insensitive
Answer:
(b) Careful

Question 4.
Read the extracts given below and attempt any one by answering the questions that follow. (5 × 1 = 5)
A. He stalks in his vivid stripes
The few steps of his cage,
On pads of velvet quiet,
In his quiet rage.

(iv) According to the extract, if the tiger were free, he would have hidden himself behind:

B. What is the boy now, who has lost his ball
What, what is he to do? I saw it go
Merrily bouncing, down the street, and then
Merrily over – there it is in the water!

No use to say ‘O there are other balls’;
An ultimate shaking grief fixes the boy’
As he stands rigid, trembling, staring down
All his young days into the harbour where
His ball went.
(i) The poet wants to know about the boy’s:
(a) background
(b) reaction
(c) mood
(d) attitude
Answer:
(b) reaction

(iii) Pick the option that correctly classifies facts (F) and opinions (O) of the students below:

(iv) The boy is completely surrounded by:
(a) joy
(b) sorrow
(c) zeal
(d) difficulties
Answer:
(b) sorrow

Question 6.
Choose the correct options to fill in the blanks to complete the librarian’s narration. (3 × 1 = 3)

Writing (10 Marks)
Question 8.
Attempt any one of the following in 100-120 words. (5 Marks)
A. Write a letter seeking detailed enquiries from the General Manager, Holiday Inn, Kanpur for conducting the wedding reception of your younger brother at the hotel. Make specific enquiries about the catering cost per head, service and decoration charges. You can also ask for the advance amount to be paid. You are Krishna/Kamini of Kanpur.

B. You are Arjun Kapoor, resident of 43/9, Shyam Enclave, Delhi. You visited Manali with your family during the summer vacation. You had two double suites at Lake View Resort. Your stay at the hotel fell far short of the description in the brochure. Write a letter of complaint to the Customer Service Department to refund for your hotel stay.

Question 9.
Attempt any one of the following in 100-120 words. (5 Marks)
A. In the graph given below we get a shocking picture of deaths in the USA due to Corona Virus that showed a constant upward trend in the month of April 2020. Write an analytic paragraph describing the general trend and other details after analysing the graph.
Increase in Corona Virus Death Cases in USA from April 10 to May 2, 2020 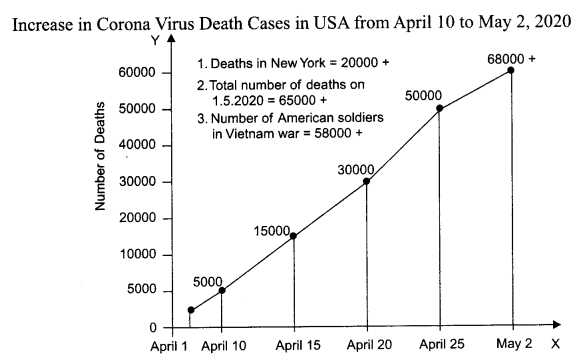 B. The following pie chart represents the distribution of the overseas tourists and their age profile respectively. Study the chart carefully and write an analytic paragraph (120-150 words) giving the general trends and other necessary details. Don’ forget to compare the segments where relevant. 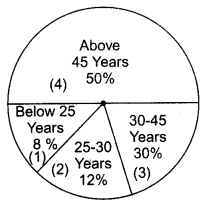 (ii) What was the tiny wish that crept into Valli’s head?

(iii) What did Kisa Gotami do when her only son died? What did her neighbours think about her?

B. (any two) (2 × 2 = 4)
(i) What excuses did Mrs Pumphrey give for not following Dr Herriot’s advice? What was the effect of the ignorance?

(ii) Why did the narrator feel that Bill’s helpfulness for him was not entirely of brotherly love?

(iii) Do you think Mr Loisel had an enjoyable evening at the ball? Give reasons for you answer.

(ii) How is the bravery of Belinda and her pets described in the poem? Do they really prove their courage and bravery?

(iii) There are some examples of diary or journal entries in the ‘Before You Read’ section. Compare these with what Anne writes in her diary. What language was the diary originally written in? In what way is Anne’s diary different?

(ii) Describe the strange behaviour of Mrs. Hall’s furniture. How did the chair start moving and push Mr and Mrs Hall out of the room?

(iii) Why did Oliver Lutkins and his mother laugh at the lawyer (the narrator) when he served the summons? Why did Lutkins take him to his neighbour’s house for a cup of coffee?

Question 12.
Answer any one of the following in 100-120 words. (5 Marks)
A. Hesitations and fears play necessary parts in human life but we get success in any enterprise only when we overcome our doubts, hesitations and fears. Justify this statement in the light of the young seagull’s efforts to muster courage to fly in the air.

B. In spite of being so powerful and displaying rare bravery of killing and swallowing the pirate, why does the dragon Custard taunted as being a coward always asking for a nice safe cage?

Question 13.
Answer any one of the following in 100-120 words. (5 Marks)
A. Bholi’s real name is Sulekha. We are told this right at the beginning. But only in the last but one paragraph of the story is Bholi called Sulekha again. Why do you think she is called Sulekha at that point in the story?

B. Do you think the lawyer was gullible? How could he have avoided being taken for a ride?