Students can access the CBSE Sample Papers for Class 10 English with Solutions and marking scheme Set 4 will help students in understanding the difficulty level of the exam.

1. This paper is divided into two parts: A and B. All questions are compulsory.
2. Separate instructions are given with each section and question, wherever necessary. Read these instructions very carefully and follow them.
3. Do not exceed the prescribed word limit while answering the questions.

Question 1.
Read the passage given below. (10 Marks)
1. I was the last child of a small-time government servant, in a family of five brothers. My very earliest memory of my father is as that of a district employment officer in Koraput, Orissa. It was and remains as back of beyond as you can imagine. There was no electricity; no primary school nearby and water did not flow out of a tap. As a result, I did not go to school until the age of eight; I was home-schooled.

2. My father used to get transferred every year. The family belongings fit into the back of a jeep, so the family moved from place to place; without any trouble, my mother would set up an establishment and get us going. Raised by a widow who had come as refugee from the then East Bengal, she was matriculate when she married my father. My parents set the foundation of my life and the value system which makes me what I am today and largely defines what success means to me.

4. That was our early childhood lesson in governance, a lesson that corporate managers learn the hard way. Indeed, some never do.

5. The jeep’s driver was treated with respect like any other member of my father’s office. As small children, we were taught not to call him by his name. We had to use the suffix ‘dada’ whenever we were to refer to him in public or in private. When I grew up to own a car, a driver by the name of Raju was appointed. I repeated the lesson to my two small daughters. They have, as a result, grown up to call Raju, ‘Raju Uncle’ – very different from many of their friends who refer to their family drivers as ‘my driver’.

6. When I hear that term from a school or college-going person, I cringe. To me, the lesson was significant: You treat small people with more respect than big people. It is more important to respect your subordinates than your superiors.

On the basis of your understanding of the passage, answer any ten questions from the twelve that follow. (10 × 1 = 10)
(i) The narrator did not go to school until the age of eight because:
(a) there was no electricity in his village
(b) there was no primary school nearby his home
(c) water did not flow out of a tap
(d) All of these
Answer:
(d) All of these

Question 2.
Read the passage given below. (10 Marks)
The epidemic of drug abuse in young generation has assumed alarming dimensions in India. Changing cultural values, increasing economic stress and dwindling supportive bonds are leading to initiation of drug abuse.

Drug addiction causes immense human distress and the illegal production and distribution of drugs have spawned crime and violence worldwide. June 26 is celebrated as international day against Drug Abuse. It is an exercise undertaken by the world community to sensitize the people in general and the youth in particular to the menace of drugs.

The pattern of drug abuse in India has undergone changes over the years. Use of drugs like charas, ganja, and opium was a tradition in some places of India, where they were mainly used for ritualistic purposes.

According to a UN report, one million heroin addicts are registered in India, and unofficially there are as many as five million. Inhalation of heroin alone has given way to intravenous drug use that too in combination with other sedatives and painkillers. This has increased the intensity of the effect, hastened the process of addiction and complicated the process of recovery.

A large number of people commit suicide due to drug/alcohol/addiction. Drug abuse is a complex phenomenon, which has various social, cultural, biological, geographical, historical and economic aspects. The disintegration of the old joint family system, absence of parental love and care in modem families where both parents are working, decline of old religious and moral values etc. lead to a rise in the number of drug addicts who take drugs to escape hard realities of life.

Drug abuse is primarily due to the nature of the drug abused, the personality of the individual and the addict’s immediate environment. The processes of industrialisation, urbanisation and migration have led to loosening of the traditional methods of social control rendering individual vulnerable to the stresses and strains of modem life. Drug abuse caused a detrimental impact on the society.

It has led to increase in the crime rate. According to the World Health Organisation report 2002, 8.9% of the total burden of disease is due to use of psychoactive substances. Adolescent drug abuse is one of the major areas of concern in adolescent and young people’s behaviour. It is estimated that in India, by the time most boys reach ninth grade, about 40% of them have tried at least one of the substance of abuse nature. 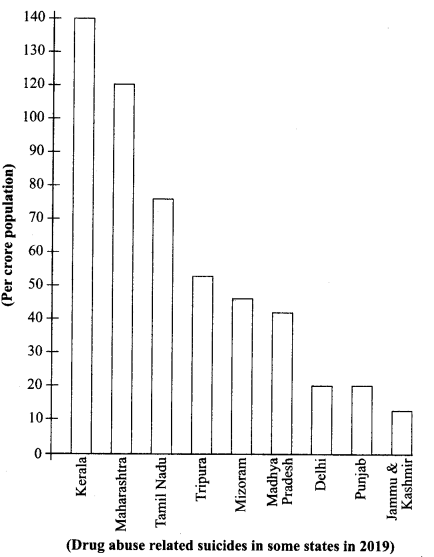 On the basis of your understanding of the passage, answer any ten questions from the twelve that follow. (10 × 1 = 10)
(i) What are the factors that cause drug abuse in young generation?
(a) Changing cultural values
(b) Increasing economic stress
(c) Dwindling supportive bonds
(d) All of these
Answer:
(d) All of these

(iv) According to a UN report, how many heroin addicts are registered in India?
(a) One lakh
(b) Ten lakh
(c) One crore
(d) Ten crore
Answer:
(b) Ten lakh

Literature (10 Marks)
Question 3.
Read the extracts given below and attempt any one by answering the questions that follow. (5 × 1 = 5)
A. Coorg, or Kodagu, the smallest district of Karnataka, is home to evergreen rainforests, spices and coffee plantations. Evergreen rainforests cover thirty percent of this district. During the monsoons, it pours enough to keep many visitors away. The season of joy commences from September and continues till March. The weather is perfect, with some showers thrown in for good measure. The air breathes of invigorating coffee. Coffee estates and colonial bungalows stand tucked under tree canopies in prime corners.
(i) What is Coorg famous for?
(a) Plantations of coffee
(b) Plantations of spices
(c) Hill station
(d) All of these
Answer:
(d) All of these

(ii) Choose the option that lists the set of statements that are NOT TRUE according to the given extract.
1. Coorg is a desert area.
2. There are abundant rainforests in Coorg.
3. The suitable time to visit Coorg is from September to March.
4. Coorg is one of the biggest districts of Karnataka.
5. The air at Coorg is filled with fragrance.
(a) 1 and 2
(b) 3 and 4
(c) 1 and 4
(d) 2 and 4
Answer:
(c) 1 and 4

(iv) Which word does ‘tucked’ NOT correspond to?
(a) Sticked
(b) Thrusted
(c) Drawn
(d) Inserted
Answer:
(c) Drawn

(v) Pick the option that correctly classifies fact/s (F) and opinion/s (O) of the students below.

(v) The extract uses the phrase, ‘heart sank’. Which of these expressions is incorrect with respect to the word ‘heart’ ?

Question 4.
Read the extracts given below and attempt any one by answering the questions that follow. (5 × 1 = 5)
A. Not one is dissatisfied, not one is demented with the mania of owning things,
Not one kneels to another, nor to his kind that lived thousands of years ago,
Not one is respectable or unhappy over the whole earth
So they show their relations to me and I accept them
They bring me tokens of myself, they evince them plainly in their possession.
(i) According to the poet, animals:
(a) are not satisfied like humans
(b) are satisfied with whatever they have
(c) run behind world things
(d) fight with one another for worldly things
Answer:
(b) are satisfied with whatever they have

(v) ‘They bring me tokens of myself. ’ Which poetic device is used in this line?
(a) Repetition
(b) Assonance
(c) Metaphor
(d) Anaphora
Answer:
(c) Metaphor

B. Suddenly, suddenly they heard a nasty sound,
And Mustard growled, and they all looked around.
Meowch! cried Ink, and ooh! cried Belinda,
For there was a pirate, climbing in the winda.

But up jumped Custard, snorting like an engine,
Clashed his tails like irons in a dungeon,
With a clatter and a clank and a jangling squirm
He went at the pirate like a robin at a worm.
(i) Suddenly they heard a sound of someone:
(a) talking with each other
(b) singing a song
(c) laughing
(d) entering the house
Answer:
(d) entering the house

(v) The word ‘nasty’ DOES NOT have a meaning similar to:
(a) disgusting
(b) awful
(c) unpleasant
(d) agreeable
Answer:
(d) agreeable

Grammar (10 Marks)
Question 5.
Choose the correct options to fill in the blanks to complete the note about fortune. (3 × 1=3)
It is generally believed that fortune (i) ……………… a big role in the life of an individual. If he
is favoured by the goddess of destiny, he may have all the good things in life. But if fortune
frowns upon him, he (ii) ……………….. completely. However, you should not forget that without studying hard you (iii) ……………. with success.
(i) (a) have played
(b) has play
(c) plays
(d) is playing
Answer:
(c) plays

Question 6.
Choose the correct options to fill in the blanks to complete the doctor’s narration.(3 × 1 = 3)

Writing (10 Marks)
Question 8.
Attempt any one of the following in 100-120 words. (5 Marks)
A. Write a letter to the Editor of a local newspaper complaining about employing minor children both boys and girls as full domestic help is a common feature, also advocating the need to stop such practice which deprives the children of their basic rights. You are Kunwar/Shubhangi, B-36, Mayur Vihar, Phase-II, Delhi.

B. You are Sakshi/Saksham, a customer of Excitel Broadband. Write a letter to the Customer Care Department, Excite! regarding the poor service of internet connection. You are a resident of 485, Ram Nagar, Shahdara.

Question 9.
Attempt any one of the following in 100-120 words. (5 Marks)
A. Read the table given below that describes postal charges among five main cities of India, Kanpur, Mumbai, Kolkata, Delhi and Lucknow. Write a critical and analytic description in a paragraph of 100-120 words. Compare and contrast them wherever possible.

B. The given report presented by Times News Network illustrates the average salaries of India Inc. to its employees for 2020. Summarise by writing an analytic paragraph (100-120 words) highlighting the main features and details. Compare wherever relevant. 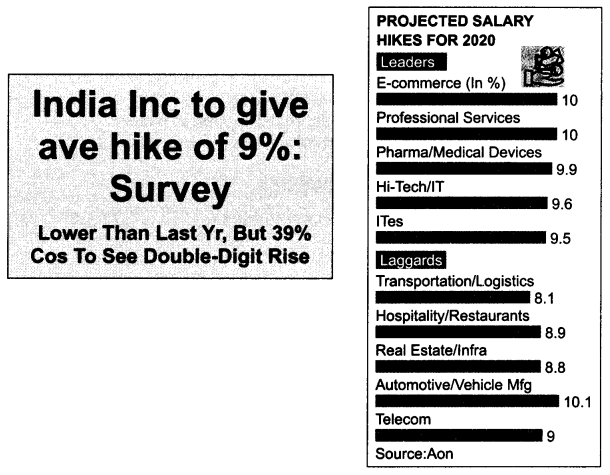 (ii) How have humans dropped those ‘tokens’ which are plainly in the ‘possession’ of animals?

(iii) Why is Chubukov surprised at Lomov’s wearing of a formal dress when he comes to meet him?

(ii) How did Mr and Mrs Loisel replace the lost necklace and return it to Mme Forestier?

(iii) How did Ramlal react after the ceremony ended with the departure of the bridegroom alone?

(ii) How did the young seagull’s mother teach him flying?

(iii) What is the story about the origin of the people of Coorg?

(ii) How did Hari Singh forget about his education in the excitement of his theft? What did he think about it in the end?

(iii) How did Richard Ebright excite the scientific world at the age of twenty two?

Question 12.
Answer any one of the following in 100-120 words. (5 Marks)
A. Do you agree that Anne Frank was far more intelligent, mature and witty than her age? Give a reasoned answer.

B. Mention two contrasting views regarding the end of the world as forecasted in the poem “Fire and Ice”.

Question 13.
Answer any one of the following in 100-120 words. (5 Marks)
A. The course of the Loisel’s life changed due to the necklace. Comment.