Proteins are most abundant biomolecules in all living organisms. The term protein is derived from Greek word ‘Proteious’ meaning primary or holding first place. They are main functional units for the living things. They are involved in every function of the cell including respiration. Proteins are polymers of α-amino acids.

Amino acids are compounds which contain an amino group and a carboxylic acid group. The protein molecules are made up a-amino acids which can be represented by the following general formula. 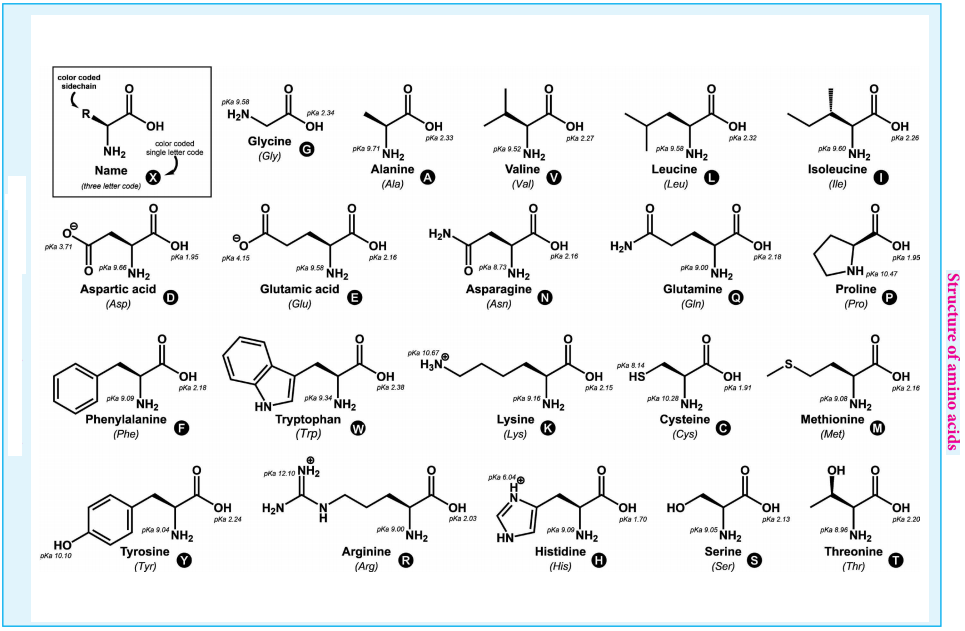 Although the vast majority of plant and animal proteins are formed by these 20 α-amino acids, many other amino acids are also found in the cells. These amino acids are called as non-protein amino acids. Example: ornithine and citrulline (components of urea cycle where ammonia is converted into urea)

In aqueous solution the proton from carboxyl group can be transferred to the amino group of an amino acid leaving these groups with opposite charges. Despite having both positive and negative charges this molecule is neutral and has amphoteric behaviour. These ions are called zwitter ions.

Except glycine all other amino acids have at least one chiral carbon atom and hence are optically active. They exist in two forms namely D and L amino acids. However, L-amino acids are used predominantly by the living organism for synthesising proteins. Presence of D-amino acids has been observed rarely in certain organisms.

The amino end of the peptide is known as N-terminal or amino terminal while the carboxy end is called C-terminal or carboxy terminal. In general protein sequences are written from N-Terminal to C-Terminal. The atoms other than the side chains (R-groups) are called main chain or the back bone of the polypeptide.

Proteins are classified based on their structure (overall shape) into two major types. They are fibrous proteins and globular proteins.

Fibrous proteins are linear molecules similar to fires. These are generally insoluble in water and are held together by disulphide bridges and weak intermolecular hydrogen bonds. The proteins are often used as structural proteins. Example: Keratin, Collagen etc… 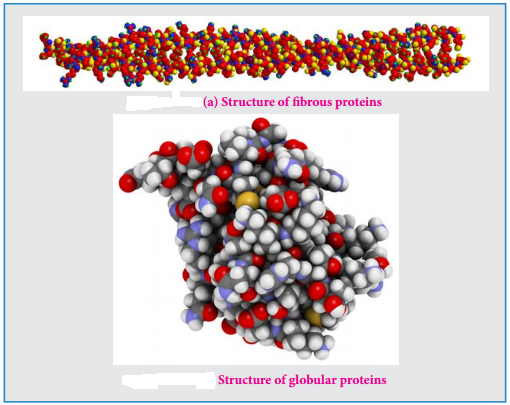 Proteins are polymers of amino acids. Their three dimensional structure depends mainly on the sequence of amino acids (residues). The protein structure can be described at four hierarchal levels called primary, secondary, tertiary and quaternary structures as shown in the figure 14.16

Proteins are polypeptide chains, made up of amino acids are connected through peptide bonds. The relative arrangement of the amino acids in the polypeptide chain is called the primary structure of the protein. Knowledge of this is essential as even small changes have potential to alter the overall structure and function of a protein.

The amino acids in the polypeptide chain forms highly regular shapes (sub-structures) through the hydrogen bond between the carbonyl oxygen image 7 and the neighbouring amine hydrogen (-NH) of the main chain. α-Helix and β-strands or sheets are two most common sub-structures formed by proteins.

In the α-helix sub-structure, the amino acids are arranged in a right handed helical (spiral) structure and are stabilised by the hydrogen bond between the carbonyl oxygen of one amino acid (nth residue) with amino hydrogen of the fifth residue (n+4th residue). The side chains of the residues protrude outside of the helix. Each turn of an α-helix contains about 3.6 residues and is about 5.4 Å long. The amino acid proline produces a kink in the helical structure and often called as a helix breaker due to its rigid cyclic structure.

β-Strands are extended peptide chain rather than coiled. The hydrogen bonds occur between main chain carbonyl group one such strand and the amino group of the adjacent strand resulting in the formation of a sheet like structure. This arrangement is called β-sheets. 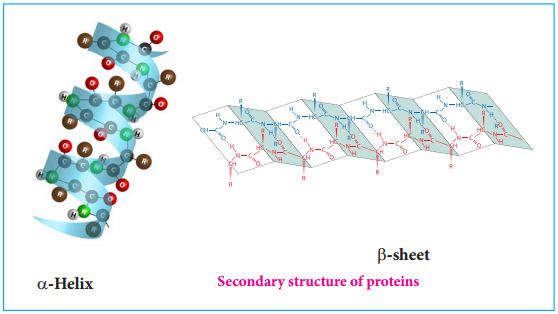 The secondary structure elements (α-helix & β-sheets) further folds to form the three dimensional arrangement. This structure is called tertiary structure of the polypeptide (protein). Teritary structure of proteins are stabilised by the interactions between the side chains of the amino acids. These interactions include the disulphide bridges between cysteine residues, electrostatic, hydrophobic, hydrogen bonds and van der Waals interactions. 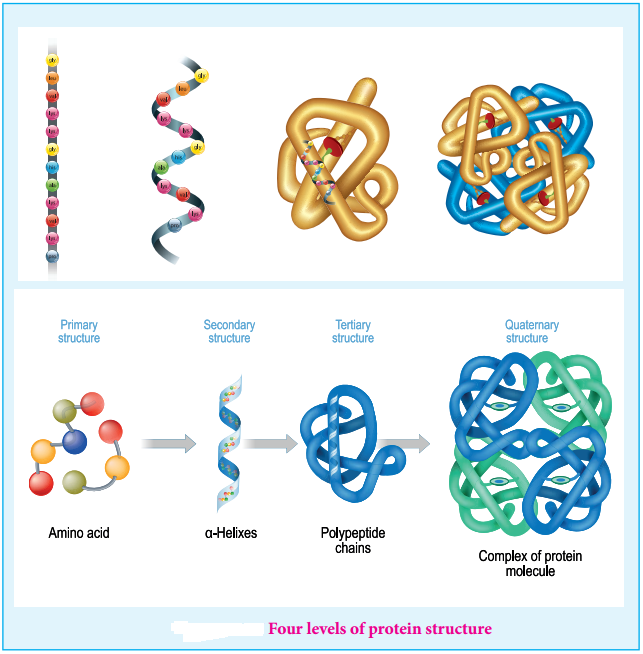 Each protein has a unique three-dimensional structure formed by interactions such as disulphide bond, hydrogen bond, hydrophobic and electrostatic interactions. These interactions can be disturbed when the protein is exposed to a higher temperature, by adding certain chemicals such as urea, alteration of pH and ionic strength etc., It leads to the loss of the three-dimensional structure partially or completely. The process of a losing its higher order structure without losing the primary structure, is called denaturation. When a protein denatures, its biological function is also lost.

Since the primary structure is intact, this process can be reversed in certain proteins. This can happen spontaneously upon restoring the original conditions or with the help of special enzymes called cheperons (proteins that help proteins to fold correctly).

Example: Coagulation of egg white by action of heat.

There are many biochemical reactions that occur in our living cells. Digestion of food and harvesting the energy from them, and synthesis of necessary molecules required for various cellular functions are examples for such reactions. All these reactions are catalysed by special proteins called enzymes. These biocatalysts accelerate the reaction rate in the orders of 105 and also make them highly specific.

Enzymes are biocatalysts that catalyse a specific biochemical reaction. They generally activate the reaction by reducing the activation energy by stabilising the transition state. In a typical reaction enzyme (E) binds with the substrate (S) molecule reversibly to produce an enzyme-substrate complex (ES). During this stage the substrate is converted into product and the enzyme becomes free, and ready to bind to another substrate molecule. More detailed mechanism is discussed in the unit XI surface chemistry. 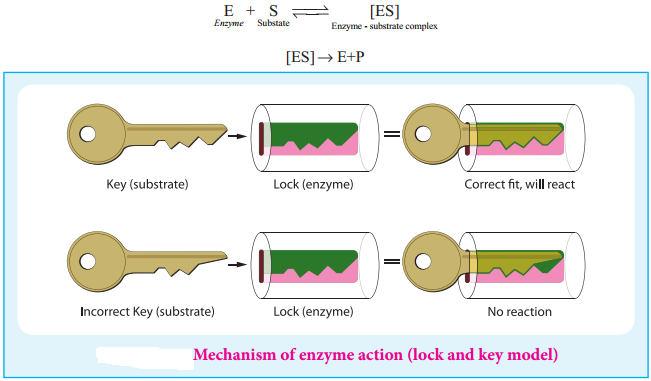