Question 1.
Indicate whether the following statements are True (T) or False (F):
(a) Unicellular organisms have a one-celled body. (T/F)
(b) Muscle cells are branched. (T/F)
(c) The basic living unit of an organism is an organ. (T/F)
(d) Amoeba has an irregular shape. (T/F)
Answer.
(a) True
(b) True
(c) False
(d) True.

Question 2.
Make a sketch of the human nerve cell. What function do nerve cells
perform?
Answer. 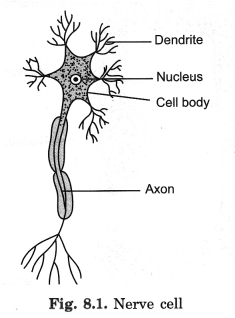 The nerve cell receives and transfers messages, thereby helping to control and coordinate the working of different parts of the body.

With a microscope of higher magnification, we can see a smaller spherical, dense body in the nucleus. It is called the nucleolus. In addition, the nucleus contains thread-like structures called chromosomes. These carry genes and help in the inheritance or transfer of characters from the parents to the next generation. The chromosomes can be seen only when the cell divides. The nucleus, in addition to its role in inheritance, acts as the control centre of the activities of the cell. 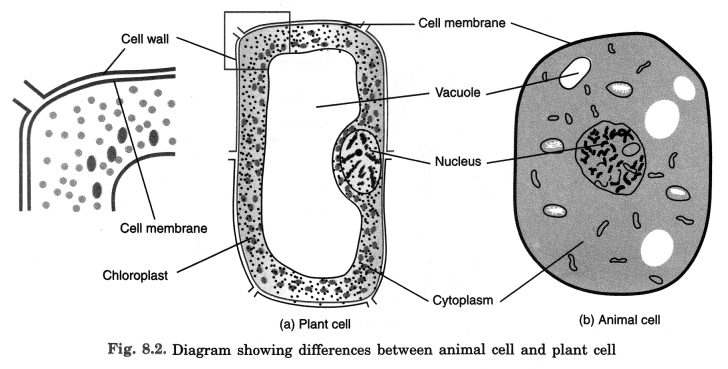 Question 6.
State the difference between eukaryotes and prokaryotes.
Answer.

Question 7.
Where are chromosomes found in a cell? State their functions.
Answer.
Chromosomes are found in the nucleus of the cell. They carry genes and help in inheritance i.e., transfer of characters from the parents to the offspring.

Question 10.
Complete the crossword with the help of clues given below:
Across
1. This is necessary for photosynthesis.
3. Term for component present in the cytoplasm.
6. The living substance in the cell.
8. Units of inheritance present on the chromosomes.
Down
1. Green plastids.
2. Formed by a collection of tissues.
4. It separates the contents of the cell from the surrounding medium.
5. Empty structure in the cytoplasm.
7. A group of cells.
Answer. 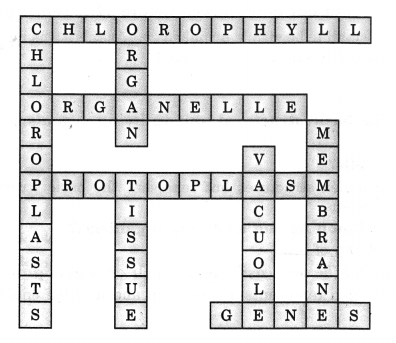