Read the following extracts and answer the questions that follow choosing the correct options among the given ones :

I. Unsought for, undesired, had come the fame which so many seek. He had become famous beyond the limits of the valley. College professors, and even the active men of cities, came from far to see and converse with Ernest, (Page 133)

II. “Because,” replied Ernest, “all through life I have awaited the fulfillment of a prophecy, and when I read these poems, I hoped that it might be fulfilled in you.” (Page 134)

Multiple Choice Questions
1. Ernest was talking to
(a) his mother
(b) a poet
(c) a neighbour
(d) General Blood-and-Thunder.

2. The prophecy concerned
(a) himself
(b) his mother
(c) the poet
(d) The Great Stone Face.

3. Ernest had expected that the poet’s face would resemble
(a) his own face
(b) Gathergold
(c) The Great Stone Face
(d) his mother’s face.

III. The prophecy was fulfilled. But Ernest, having finished what he had to say, took the poet’s arm, and walked slowly homeward, still hoping that some wiser and better man than himself would by and by appear, bearing a resemblance to the Great Stone Face. (Page 136)

Multiple Choice Questions
1. The prophecy was fulfilled in
(a) the poet
(b) Ernest
(c) Gathergold
(d) General Blood-and-Thunder.

Write ‘True’ or ‘False’ against each of the following statements.
1. Ernest’s words reminded people of the wise old sayings.___
2. Total strangers from far away, who visited Ernest in the valley, found his face familiar.___
3. The Great Stone Face confirmed Ernest’s view that the poet could be worthy of its like-ness. ___
4. When Ernest and the poet met, they respected and admired each other equally.___
5. The poet along with Ernest addressed the inhabitants of the valley.___
6. The poet realised that Ernest’s thoughts were far nobler than his own verses.___

Answer the following questions.
Question. 1.
How was Ernest different from others in the valley ?

Answer:
There were thousands of inhabitants in the valley. Ernest was good and simple hearted. He did noble deeds every day. He was a humble and thoughtful person. He had wise thoughts in his mind. He became famous throughout the world. In this way, he was different from others in the valley.

Question. 2.
Why did Ernest think the poet was like the Stone Face ?

Answer:
The poet wrote songs with lofty thoughts. While he was talking to Ernest, he looked wise, gentle and kind. Even the Great Stone Face appeared bending forward to listen to his talk. The Stone Face even looked kindly at the poet, though he was a complete stranger. Therefore, Ernest thought the poet was like the Stone Face.

Question. 3.
What did the poet himself say about his thoughts and poems ?

Answer:
The poet said that his thoughts contained the distant voice of a heavenly song. However, his life had been different from his poems. He himself lacked faith in his dreamy thoughts.

Question. 4.
What made the poet proclaim Ernest was the Stone Face ?

Answer:
Through Ernest’s speech, the poet judged his greatness. He felt that Ernest’s life and character were a nobler kind of poetry.

Moreover, Ernest’s white hair looked like the Great Stone Face surrounded by white clouds. Ernest’s face also assumed a grand expression. It moved the poet’s heart. It also made him proclaim Ernest as the Stone Face.

Question. 5.
Write ‘Ernest’ or ‘Poet’, against each statement below :
(i) There was a gap between his life and his words.
(ii) His words had the power of truth as they agreed with his thoughts.
(iii) His words were as soothing as a heavenly song but only as useful as a vague dream.
(iv) His thoughts were worthy.
(v) Whatever he said was truth itself.
(vi) His poems were noble.
(viii) His life was nobler than all the poems.
(viii) He lacked faith in his own thoughts.
(ix) His thoughts had power as they agreed with the life he lived.
(x) Greatness lies in truth. Truth is best expressed in one’s actions. He was truthful, therefore he was great.

Question. 6.
(i) Who, by common consent, turned out to be like the Great Stone Face ?
(ii) Did Ernest believe that the old prophecy had come true ? What did he say about it ?

Answer:
(i) By common consent, Ernest turned out to be like the Great Stone Face.
(ii) No, Ernest did not believe that the old prophecy had come true. He still hoped, that some day, some man, wiser and better than himself would appear. He would bear a likeness to the Great Stone Face.

WORKING WITH LANGUAGE (Page 137)
1. Mark the meaning that best fits the word or a phrase in the story.
(i) (sun) going down
(a) becoming smaller
(b) weakening
(c) setting

(x) took on (an expression)
(a) challenged
(b) resembled
(c) assumed

2. (i) Read the following sentences.
(a) I do hope I’ll live to see him.
(b) He will come! Fear not, Ernest; the man will come.
(c) Gathergold is arriving tomorrow, people said.
(d) Blood-and-Thunder starts his journey back to the valley next week, everyone proclaimed.
(e) The great man is going to spend his old age in his native town.

Notice that in the above sentences, verbs in bold type are in four different forms, denoting four important ways of expressing future time. None of these can be said to be exclusively used to show future time, though each is used to refer to some action in future.

(ii) Which form of the verb is more natural in these sentences ? Encircle your choice.
(a) I’m not free this evening. I will work/am working on a project.
(b) Have you decided where you will go for your higher secondary ? Yes. I have. I will go/am going to the Kendriya Vidyalaya.
(c) Don’t worry about the dog. It won’t hurt/isn’t hurting you.
(d) The weatherman has predicted that it will snow/’I’ is snowing in Ranikhet tonight.
(e) Swapna can’t go out this evening. Her father will come/is coming to see her.

Answers
(i) Do yourself. 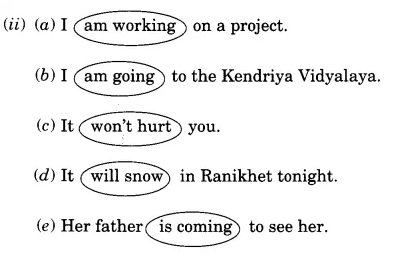 SPEAKING AND WRITING
Question 1.
Each of the following words has the sound / f / as in feel. The words on the left have it initially. Those on the right have it finally. Speak each word clearly.

Question 2.
Underline the letter or letters representing / f / in each of the following words.

Question 3.
Imagine that you are the poet. You have come to your native valley to meet a famous preacher called Ernest. Narrate the incident of your first meeting with him.

I sat beside him. We talked for a long time. Never before, I had met so wise and gentle and kind a person. Then suddenly, he gazed into my eyes, called me gifted and asked who I was. I pointed to the book in his hand. I said that I was the one who wrote that book. I felt that he was now comparing my features to those of the Great Stone Face. It made him sad because he did not find the desired resemblance. I told him that I was not worthy of that likeness. Ernest asked, “Why not ?” I told him that my life did not correspond with my thoughts. Ernest’s eyes were full of tears.

At the hour of sunset, he took me to a place. Here he spoke to a group of neighbours in the open air. While listening to Ernest, I felt that I had before me the worthiest sage.

All the people there looked and saw that what I said was true. The prophecy was fulfilled. Ernest however, was too humble to believe it.

Answers
(i) • George Abraham, a resident of Noida near Delhi, is visually impaired.
• It provides confidence and competitive spirit and infuses discipline among the participants.
• The brain behind the World Cup Cricket, he has helped the disabled to dream.
• It was a chance visit to the blind school in Delhi that changed his life.
• He believes that sport is a powerful tool for rehabilitation of the disabled.

(ii) George Abraham, a resident of Noida near Delhi, is visually impaired. The brain behind the World Cup Cricket, he has helped the disabled to dream. It was a chance visit to the blind school in Delhi that changed his life. He believes that sport is a powerful tool for rehabilitation of the disabled. It provides confidence and competitive spirit and infuses discipline among the participants.