Question 1.
Based on your reading of the article above, answer the following questions :

1. Our efforts to attract foreign tourists have been constantly unsuccessful. The evidence is that Malaysia and China entered the tourism market much after India. But in 2009. Malaysia had 23.6 million foreign arrivals and China 50.9 million. On the other hand, India had just 5.1 million tourists.

2. The reason for this bleak scenario is that India has been courting the wrong tourist. We have been running after aggressive looking foreign tourists who come in small number. Their own countries are hit by recession. They are very demanding too. We have not been trying to get tourists from countries such as China, Russia and South America.

4. Karnataka has effected the change too. Formerly the state of Karnataka ran Golden Chariot Tourist train for foreigners only. Now it runs Jewel of the South tour for well- off Indian tourists also. Karnataka has another attraction for rich and young Indian tourists. It is Jungle Camps and Trails. It is a new version of Jungle Lodges and Resorts which were made for the foreigners. These two things signify a marked change in Karnataka’s marketing strategy.

5. Kerala’s tourism figures have grown while those of some other states have remained static. This has happened because Kerala’s Tourism secretary, Dr. Venu has shifted his focus. In 2006-07, Kerala targeted 60% international and 40% domestic tourists. He allocated the state’s tourism resources accordingly. He organised partnership meets in non-metro cities all around India. These meets were between the tourism professionals of Kerala and those cities. The result was that the tourism figures in Kerala grew while they remained unchanged in many states. These were the states which still depended on small and uncertain foreign market.

6. The author gives arguments in support of his contention. The contention is that greater emphasis should be laid to attract domestic tourists. In 2009 India received 5.11 million foreign tourists. On the other hand, more than 11 million Indians went as tourists to foreign markets. If we concentrate on improving facilities for the domestic tourist, the outflow of Indian tourists and rupees will reduce. Better infrastructure such as roads, airports, hygiene will also attract more international visitors. So these are the areas we should focus on.

Question 2.
Find words or phrases from the passage that mean the same as the following.

Question 3.
Imagine that you are the Director of the Department of Tourism of the State of Palwal Pradesh. You have recently received the following letter from the Minister of Tourism.
Answer:
Please read the letter carefully. It will help us in answering question no. 5.

Question 4.
In section D.6 you will write the report asked for. First though, it is necessary to study the following statistics and draw appropriate conclusions. Work in groups of four. Discuss the three figures in this section and the questions that follow each figure, and write notes to answer those questions. (Contrary to the recent trends, foreign tourists visiting Palwal Pradesh outnumber domestic tourists). 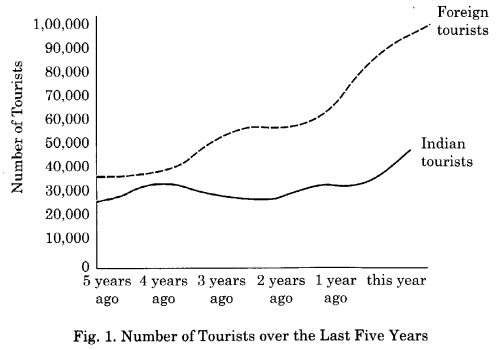 (a) The Government has exposed the country’s tourist spots very favourably. This has attracted a large number of foreign tourists to visit India.

(b) There is now an increased awareness of our country as a tourist destination in the foreign countries. Due to this the tourists want to know more about India and its age-old culture.

(c) An increased number of five and four-star hotels and other good quality hotels— both private and Government—have come out at the tourist spots during the last decade.

(d) Many reputed Travel Agencies have also sprung up. They have a contact with their counterparts in other countries. They take every care to make the visit of the foreign tourists comfortable by arranging package tours.

(a) At local level there has grown a public awareness for tourism within the country. Consequently, many middle class families have started local sight-seeing.

(b) Various government schemes like Leave Travel Concession to govt, employees, subsidized and concessional travel to students etc, for educational tours have contributed to the increase of tourists.

(c) Improvement in the standard of living is also a positive factor in this direction. It has definitely boosted tourism. 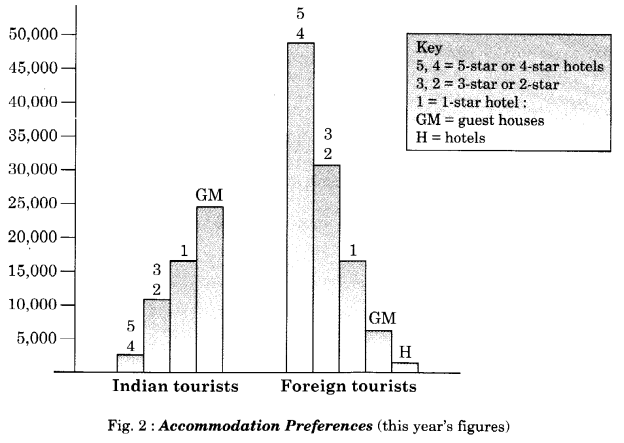 3. Guest houses are popular with Indian tourists because of two reasons. First, they are affordable. Secondly, the atmosphere and the fobd are to their taste.

Four and five star accommodation is popular with the foreigners because this caters to their different needs. Besides the modern facilities, these hotels provide each foreigner the food of his/her choice.

Question 5.
Work with a partner to write the report asked for in D.4. You are the Director of Tourism for Palwal Pradesh. Make sure that ……

First study Q.6 and Q.7. Then (working in pairs) write your report.

A study of the present trends of tourism in Palwal Pradesh, their main features and projections for 10 years’ time

The following are our findings and suggestions.

1.1. Origin of tourists : So the trend suggests that most of the tourists to Palwal Pradesh are of foreign origin.

This is hardly surprising because domestic tourists cannot afford luxury accommodation. They prefer to spend less on accommodation.

2.2. Accommodation : Palwal Pradesh has to increase the accommodation. The biggest increase is needed in the number of 4 star hotels. Their number must increase from the present no. 5 to 30-35 in ten years. The number of 5 star hotels should increase from 3 to 18-20. 1, 2 and 3 star hotels are being taken by both groups of tourists. So their number should increase in the same proportion ie, about 6 times each. The same thing is true of guest houses. However, the greatest need is to increase the number of youth hostels which should be increased from 13 to 32.

3. Recommendations : There has been a steady rise in the number of foreign tourist. So special attention should be given to create facilities for them.

I am confident of a good tourism future of Palwal Pradesh.
(Signature)
(Shankar Murti)
Director of Tourism
Palwal Pradesh

Question 7.
In your written report, you will find the following language useful:
when describing trends and changes
Answer:
No question asked.

Question 8.
A Final Check….
Before you hand in your report: