i.e., for a mixture containing three gases 1, 2 and 3 with partial pressures p1, p2 and p3 in a container with volume V, the total pressure Ptotal will be give by

Assuming that the gases behave ideally 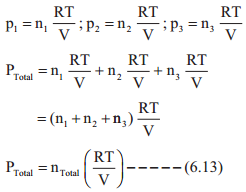 The partial pressure can also be expressed as 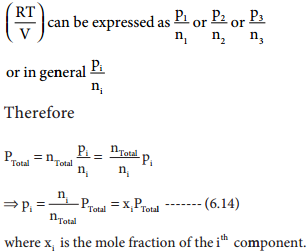 In a reaction involving the collection of gas by downward displacement of water, the pressure of dry vapor collected can be calculated using Dalton’s law.

Pwater vapour is generally referred as aqueous tension and its values are available for air at various temperatures.

Let us understand Dalton’s law by solving this problem. A mixture of gases contains 4.76 mole of Ne, 0.74 mole of Ar and 2.5 mole of Xe. Calculate the partial pressure of gases, if the total pressure is 2 atm at a fixed temperature.

Gases have a tendency to occupy all the available space. When two non-reactive gases are allowed to mix, the gas molecules migrate from region of higher concentration to a region of lower concentration. This property of gas which involves the movement of the gas molecules through another gases is called diffusion. Effusion is another process in which a gas escapes from a container through a very small hole.

Diffusion and Effusion of Gases

The rate of diffusion or effusion is inversely proportional to the square root of molar mass. This statement is called Graham’s law of diffusion/effusion.

where rA and rB are the rates of diffusion of A and B and the MA and MB are their respective molar masses.

1. An unknown gas diffuses at a rate of 0.5 time that of nitrogen at the same temperature and pressure. Calculate the molar mass of the unknown gas. 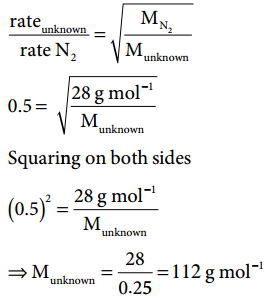