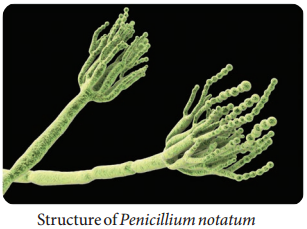 Penicillium chrysogenum is a high yielding strain, used for the commercial production of penicillin. This strain is highly unstable, so the spore suspensions are maintained in a dormant state to prevent contamination. Most penicillin form filamentous broth and hence is difficult to mix and it hinders
oxygen transfer due to their high viscosity.

This is avoided by using bubble columns air lift reactors which agitates the medium providing even oxygen distribution. Penicillin has a basic structure 6-amino penicillanic acid β-(APA). It consists of a thiazolidine ring with a condensed β-lactum ring. It carries a variable side chain in position 6. Natural penicillins are produced in a fermentation process without adding any side chain precursors.

The initial strain of Penicillium chrysogenum (NRRL, 1951) was low yielding strain and so it is was treated with mutagenic agents such as X-rays, UV right and some other repeated methods to get a high yielding strain Q-176.

Penicillin production is done by one of the following.

To inoculate fermentation medium one of the following methods can be employed.

The lyophilized spores (or) spores in well sporulated frozen agar slant are suspended in water or in a dilute solution of a nontoxic wetting agent.

(1: 10,000 sodium lauryl sulphonate)
↓
Spores are then added to a bottles containing wheat bran solution It is incubated for 5-7 days at 24°C for heavy sporulation.
↓
The resulting spores are then transferred to production tank
↓
The micro organism in the inoculum tank is checked for contamination.

Carbon source as Lactose, Nitrogen source as Ammonium sulphate, Acetate or Lactate (Corn steep liquor is the cheap and easy source of nitrogen)

Growth of mycelium occurs in this phase where the yield of antibiotic is low. The pH increases due to the release of NH<sub>3</sub>.

In this phase, intense synthesis of penicillin occurs due to rapid consumption of Lactose and Ammonium nitrogen. The mycelial mass increases and the pH remain unchanged (Figure 6.10).

In this phase, the concentration of antibiotics decreases in the medium. Autolysis of mycelium starts, liberating Ammonia leading to slight rise in pH.