We have already seen that the heat changes in chemical reactions are equal to the difference in internal energy (ΔU) or heat content (ΔH) of the products and reactants, depending upon whether the reaction is studied at constant volume or constant pressure.

Since ΔU and ΔH are functions of the state of the system, the heat evolved or absorbed in a given reaction depends only on the initial state and final state of the system and not on the path or the steps by which the change takes place.

This generalisation is known as Hess’s law and stated as:

The enthalpy change of a reaction either at constant volume or constant pressure is the same whether it takes place in a single or multiple steps provided the initial and final states are same. 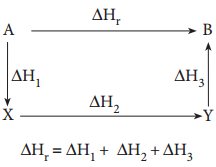 The reactions involved in this process can be expressed as follows

According to Hess law,

Hess’s law, also called Hess’s law of constant heat summation or Hess’s law of heat summation, rule first enunciated by Germain Henri Hess, a Swiss-born Russian chemist, in 1840, stating that the heat absorbed or evolved (or the change in enthalpy) in any chemical reaction is a fixed quantity and is independent of the law.

Hess’ law can be used to determine the overall energy required for a chemical reaction, when it can be divided into synthetic steps that are individually easier to characterize. This affords the compilation of standard enthalpies of formation, that may be used as a basis to design complex syntheses.

Hess law of constant heat summation states that the total enthalpy change during a reaction is the same whether the reaction takes place in one step or in several steps.

Hess law is useful to calculate heats of many reactions which do not take place directly.

To experimentally measure the ΔH values of two reactions using the technique of constant pressure calorimetry. To apply these ΔH values in a Hess’s Law calculation to determine the enthalpy of combustion of a metal.

By converting the methanol to formaldehyde and hydrogen the enthalpy of the fuel has been increased. When the formaldehyde and the hydrogen are burned 86 kJ more energy will be released than when methonol is burned H is per mole. means that for each mole of methanol burned 677 kJ heat are released.

Hess’s law is due to enthalpy being a state function, which allows us to calculate the overall change in enthalpy by simply summing up the changes for each step of the way, until product is formed. All steps have to proceed at the same temperature and the equations for the individual steps must balance out.

Germain Henri Hess is noted today for two fundamental principles of thermochemistry: the law of constant summation of heat (known simply as Hess’s law) and the law of thermoneutrality.

Hess’s Law of Constant HeatSummation (or just Hess’s Law) states that regardless of the multiple stages or steps of a reaction, the total enthalpy change for the reaction is the sum of all changes. This law is a manifestation that enthalpy is a state function.