The common physical properties of the group 17 elements are listed in the table. 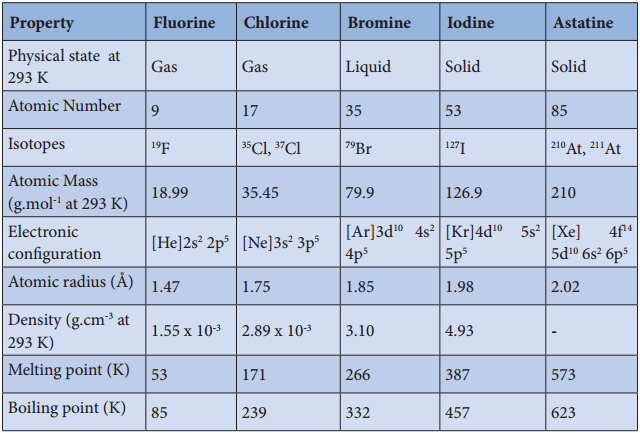 Chlorine is highly reactive hence it doesn’t occur free in nature. It is usually distributed as various metal chlorides. The most important chloride is sodium chloride which occurs in sea water.

Chlorine is prepared by the action of conc. sulphuric acid on chlorides in presence of manganese dioxide.

It can also be prepared by oxidising hydrochloric acid using various oxidising agents such as manganese dioxide, lead dioxide, potassium permanganate or dichromate.

When bleaching powder is treated with mineral acids chlorine is liberated

Chlorine is manufactured by the electrolysis of brine in electrolytic process or by oxidation of HCl by air in Deacon’s process.

When a solution of brine (NaCl) is electrolysed, Na+ and Cl– ions are formed. Na+ ion reacts with
OH– ions of water and forms sodium hydroxide. Hydrogen and chlorine are liberated as gases.

In this process a mixture of air and hydrochloric acid is passed up a chamber containing a number of shelves, pumice stones soaked in cuprous chloride are placed. Hot gases at about 723 K are passed through a jacket that surrounds the chamber.

The chlorine obtained by this method is dilute and is employed for the manufacture of bleaching powder. The catalysed reaction is given below,

Chlorine is a greenish yellow gas with a pungent irritating odour. It produces headache when inhaled even in small quantities whereas inhalation of large quantities could be fatal. It is 2.5 times heavier than air. Chlorine is soluble in water and its solution is referred as chlorine water. It deposits greenish yellow crystals of chlorine hydrate (Cl2.8H2O). It can be converted into liquid (Boiling point – 34.6°C) and yellow crystalline solid (Melting point – 102°C).

Action with metals and non-metals:

It reacts with metals and non metals to give the corresponding chlorides.

When burnt with turpentine it forms carbon and hydrochloric acid.

It forms dioxygen when reacting with water in presence of sunlight. When chlorine in water is exposed to sunlight it loses its colour and smell as the chlorine is converted into hydrochloric acid.

Chlorine reacts with ammonia to give ammonium chloride and other products as shown below:
With excess ammonia,

Chlorine oxidises hydrogen sulphide to sulphur and liberates bromine and iodine from iodides and bromides. However, it doesn’t oxidise fluorides.

Chlorine reacts with cold dilute alkali to give chloride and hypochlorite while with hot concentrated alkali chlorides and chlorates are formed.

Chlorine is a strong oxidising and bleaching agent because of the nascent oxygen.

The bleaching of chlorine is permanent. It oxidises ferrous salts to ferric, sulphites to sulphates and hydrogen sulphide to sulphur.

Chlorine displaces bromine from bromides and iodine from iodide salts. 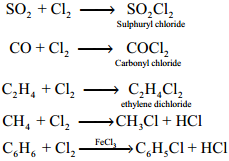 It is used in

It is prepared by the action of sodium chloride and concentrated sulphuric acid.

Dry hydrochloric acid is obtained by passing the gas through conc. sulphuric acid.

Hydrogen chloride is a colourless, pungent smelling gas, easily liquefied to a colourless liquid (boiling point 189K) and frozen into a white crystalline solid (melting point 159K). It is extremely soluble in water.

Like all acids it liberates hydrogen gas from metals and carbon dioxide from carbonate and bicarbonate salts.

Trends in Physical and Chemical Properties of Hydrogen Halides:

Any halogen vapours which escapes with the hydrogen halide is removed by passing the gases through a column of moist red phosphorous.

Halogens are reduced to hydrogen halides by hydrogen sulphide.

Hydrogen chloride is obtained as a by-product of the reactions between hydrocarbon of halogens.

In line with the decreasing bond dissociation enthalpy, the thermal stability of hydrogen halides decreases from flouride to iodide. For example, Hydrogen iodide decomposes at 400° C while hydrogen flouride and hydrogen chloride are stable at this temperature.

At room temperature, hydrogen halides are gases but hydrogen flouride can be readily liquefied. The gases are colourless but, with moist air gives white fumes due to the production of droplets of hydrohalic acid. In HF, due to the presence of strong hydrogen bond it has high melting and boiling points. This effect is absent in other hydrogen halides.

The hydrogen halides are extremely soluble in water due to the ionisation.

Solutions of hydrogen halides are therefore acidic and known as hydrohalic acids. Hydrochloric, hydrobromic and hydroiodic acids are almost completely ionised and are therefore strong acids but HF is a weak acid i.e. 0.1mM solution is only 10% ionised, but in 5M and 15M solution HF is stronger acid due to the equilibrium.

At high concentration, the equilibrium involves the removal of flouride ions is important. Since it affects the dissociation of hydrogen flouride and increases and hydrogen ion concentration Several stable salts NaHF2, KHF2 and NH4HF2 are known. The other hydrogen halides do not form hydrogen dihalides.

Hydrohalic acid shows typical acidic properties. They form salts with acids, bases and reacts with metals to give hydrogen. Moist hydroflouric acid (not dry) rapidly react with silica and glass.

Hydrogen iodide is readily oxidised to iodine hence it is a reducing agent.

Acidic solution of iodides is readily oxidised. A positive result is shown by liberation of iodine which gives a blue-black colouration with starch.

Hydrogen bromide is more difficult to oxidise than HI. HBr reduces slowly H2SO4 into SO2

But hydrogen iodide and ionic iodides are rapidly reduced by H2SO4 into H2S and not into SO2.

Reducing property of hydrogen iodide can be also explained by using its reaction with alcohols into ethane. It converts nitric acid into nitrous acid and dinitrogen dioxide into ammonium.

Hydrogen chloride is unaffected by concentrated sulphuric acid but affected by only strong oxidising agents like MnO2, potassium permanganate or potassium chloride.

To summarize the trend, 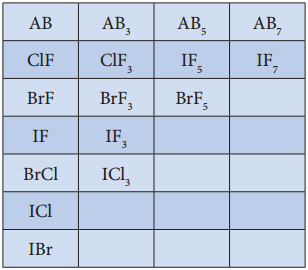 When heated with the alkalis, larger halogen form oxyhalogens and the smaller forms halide.

The structures of different type of interhalogen compunds can be easily explained using VSEPR theory. The details are given below. 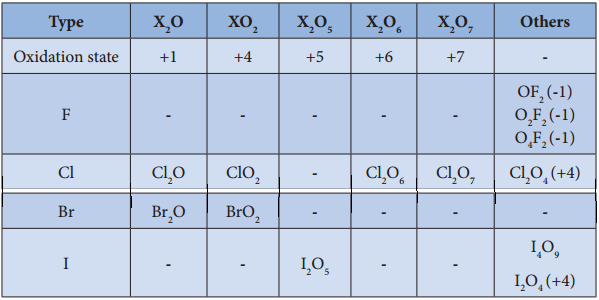