The term respiration was coined by Pepys (1966). Respiration is a biological process in which oxidation of various food substances like carbohydrates, proteins and fats take place and as a result of this, energy is produced where O2 is taken in and CO2 is liberated. The organic substances which are oxidised during respiration are called respiratory substrates.

Among these, glucose is the commonest respiratory substrate. Breaking of C-C bonds of complex organic compounds through oxidation within the cells leads to energy release. The energy released during respiration is stored in the form of ATP (Adenosine Tri Phosphate) as well as liberated heat. Respiration occurs in all the living cells of organisms. The overall process of respiration corresponds to a reversal of photosynthesis. C6H12O6 + 6O2 → 6CO2 + 6H2O + Energy (686 K cal or 2868 KJ)
(1K cal = 4.184 KJ) 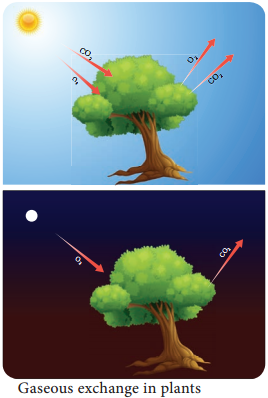 Depending upon the nature of respiratory substrate, Blackman divided respiration into,

At dawn and dusk the intensity of light is low. The point at which CO2 released in respiration is exactly compensated by CO2 fixed in photosynthesis that means no net gaseous exchange takes place, it is called compensation point. At this moment, the amount of oxygen released from photosynthesis is equal to the amount of oxygen utilized in respiration. 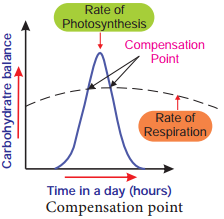