You can also practice NCERT Solutions for Class 6 History Chapter 9 Questions and Answers on LearnInsta.com.

Question 2.
Which iron tools were used earliest?
Answer:
Axes and ploughshare were used first of all.

Question 3.
What was the role played by ploughshare in the agriculture?
Answer:
This was useful for preparing agricultural fields.

Question 4.
Name the city where Sangam literature was composed.
Answer:
In Madurai.

Question 5.
What is ‘Jatakas’?
Answer:
Jatakas are stories, probably composed by ordinary people and then written down and preserved by Buddhist monks.

Question 7.
Why were the coins called punch-marked?
Answer:
Because the designs were punched on the metals.

Question 8.
In which chapter of Arthashastra, rules for spinning and weaving have been mentioned?
Answer:
In chapter 8.

Question 10.
What do you understand about ‘amphorae pottery’ found from the Arikamedu site?
Answer:
These are tall double-handled jars that contained liquids such as wine or oil.

Question 11.
What do you mean by ‘Arretine Ware’?
Answer:
Stamped red-glazed pottery was known as Arretine Ware. This was made by pressing wet clay into a stamped mould.

Question 12.
What is watched by Prabhakar?
Answer:
Prabhakar watched smiths at the local shop.

Question 3.
Which occupations are covered under crafts works?
Answer:
Blacksmithing, pottery, carpentry, weaving, artisan, handicraft and all those work which are made with the creativity whether it is by hand or with the help of machines.

Question 1.
Why was Mathura an important city about 2500 years ago?
Answer:
It was an important city because it was located at the crossroads of two major routes of travel and trade. Northwest to East and from North to South. There were fortifications around the city and several shrines. Mathura was also a center where some extremely fine sculpture was produced.

Around 2000 years ago Mathura became the second capital of the Kushanas. Mathura was also a religious centre. There were Buddhist monasteries, Jaina shrines and it was an importan centre for the worship of Krishna.

Question 2.
What was recorded in inscriptions about the gifts and occupations in the early city Mathura? Answer:
It has been recorded in the inscriptions that gifts were made by the people to monasteries and shrines. These were made by kings and queens, officers, merchants and craft persons who lived in the city. Mathura was one of the centre of goldsmiths, blacksmiths, weavers, basket makers, garland makers, perfumers etc.

These shrenis also served as banks where rich people deposited money and a part of the interest was returned or used to support religious institutions such as monasteries.

Question 1.
Find out following in the map of India.
(a) Mathura
(b) Arikamedu
(c) Bharuch
Answer: 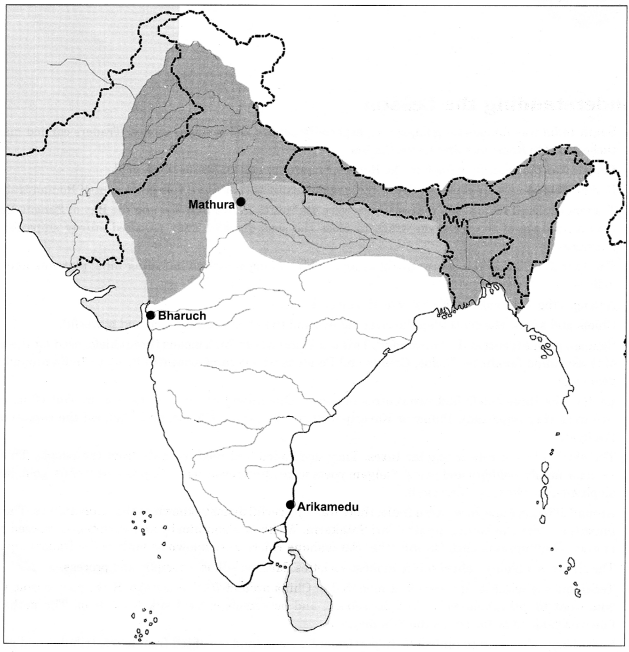