Here we are providing Class 11 chemistry Important Extra Questions and Answers Chapter 5 States of Matter. Chemistry Class 11 Important Questions are the best resource for students which helps in Class 11 board exams.

Question 1.
What is the pressure of a gas? What is its S.I. unit?
Answer:
The force exerted by the gas molecules per unit area on the walls of the container is equal to its pressure SI. unit of pressure is the pascal (Pa).
1 Pa = Nm2- =1 kg m-1s-2.

Question 3.
Why is it not possible to cool gas to o K?
Answer:
This is because all gases condense to liquids or solids before this temperature is reached.

Question 4.
What property of molecules of real gases is indicated by van der Waal’s constant ‘a’?
Answer:
Intermolecular attraction.

Question 8.
Which state of matter has a definite volume, but no definite shape?
Answer:
Liquid.

Question 10.
What are the S.I. units of surface tension?
Answer:
Nm-1

Question 13.
How is the pressure of a gas related to its density at a particular temperature?
Answer:
d = \(\frac{MP}{RT}\)

In underwater diving the physiological effects of individual component gases of breathing gases is a function of partial pressure formula.

Question 20.
The size of the weather balloon keeps on becoming larger as it rises to high altitude. Explain why?
Answer:
At higher altitudes, the external pressure on the balloon decreases and therefore, its size increases.

Question 21.
How is the pressure of a given sample of a gas related to the temperature at a constant volume?
Answer:
P ∝ T, i.e., Pressure varies as absolute temperature.

Question 23.
What type of graph do we get when we plot a graph PV against P? What is shown by this graph?
Answer:
It is a straight line parallel to the r-axis. It shows that PV is constant at different pressures. It shows Boyle’s Law.

Question 25.
At a particular temperature why vapours pressure of acetone is less than that of ether?
Answer:
This is because intermolecular forces in acetone are more than those present in ether.

Question 26.
Out of NH3 and N2 which will have
(i) a larger value of V and
Answer:
NH3 will have a large value of ‘a’ because of hydrogen bonding.

(ii) larger value of ‘b’?
Answer:
N2 should have a large value of ‘b’ because of its larger molecular size.

Question 29.
Under what conditions do real gases tend to show ideal gas behaviour?
Answer:
When the pressure of the gas is very low and the temperature is high.

Question 31.
If the number of moles of a gas is doubled by keeping the temperature and pressure constant, what will happen to the volume?
Answer:
The volume will also double as V ∝ n according to Avogadro’s Law.

Question 32.
What is a Triple point?
Answer:
The temperature at which solid, liquid and vapour; i.e., all the three states of the substance exist together is called the triple point.

Question 33.
Is Dalton’s law of partial pressures valid for a mixture of SO2 and O2?
Answer:
No, the law holds good only for those gases which do not react with each other.

Question 34.
Under what conditions a gas deviates from ideal gas behaviour?
Answer:
It deviates at low temperature and high pressure.

Question 36.
How will you define pascal?
Answer:
It is defined as the pressure exerted by a force of one newton on an area of one meter2.
Pa = 1 Nm-2.

Question 38.
What is Absolute Zero?
Answer:
The lowest possible hypothetical temperature of – 273°C at which gas is supposed to have zero volume is called Absolute zero.

Question 39.
What is the nature of the gas constant R?
Answer:

= work done per degree per mole.

Question 42.
How will you define viscosity?
Answer:
The internal resistance to the flow of a fluid is called its viscosity.

Question 45.
What do you understand from surface tension?
Answer:
The surface tension of a liquid is defined as the force acting at right angles to the surface along a one-centimetre length of the. liquid.

Question 48.
What is the difference between vapour and gas?
Answer:
When gas is below its critical temperature, it is called vapour.

Question 49.
What happens if a liquid is heated to the critical temperature of its vapours?
Answer:
The meniscus between the liquid and the vapour disappears, the surface tension of the liquid becomes zero.

Question 50.
Why falling liquid drops are spherical?
Answer:
The surface area of a sphere is minimum. In order to have minimum surface area drops of the liquid become spherical.

Question 1.
Ammonia and Sulphur dioxide gases are prepared in two comers of a laboratory. Which gas will be detected first by a student working in the middle of the laboratory and why?
Answer:
Molecular mass of NH3 = 17 Molecular mass of SO2 = 64
NH3 is a lighter gas and diffuses at a faster speed than SO2
∴ NH3 gas will be detected first.
[∵ Acc. to Graham’s law of diffusion \(\frac{r_{1}}{r_{2}}=\sqrt{\frac{d_{2}}{d_{1}}}\)

Question 3.
Which are the two faulty assumptions in the kinetic theory of gases.
Answer:

Question 4.
What is the relationship between the density and molar mass of a gaseous substance? Derive it.
Answer:
Ideal gas equation is PV = nRT
or \(\frac{n}{V}=\frac{p}{R T}\)
Replacing n by \(\frac{m}{M}\), we get

Question 5.
What is meant by the term: Non-ideal or real gas?
Answer:
The gas which does not obey the Cas law:
Boyle’s law, Charles’ law, Avogadro^ law at all temperatures and pressures is a called-non-ideal or real gas. Most of the real gases show ideal behaviour at low pressure and high temperature.

Question 9.
Write down the van der Waals, equation for n moles of a real gas. What do the constants ‘a’ and ‘b’ stand for?
Answer:
(P + \(\frac{a n^{2}}{V^{2}}\)) (V – nb) = nRT
where p, Vindicate gas pressure and its volume. T is the Kelvin temperature of the gas. R is gas constant. Value of ‘a’ is a measure of the magnitude of intermolecular attractive forces within the molecule and is independent of temperature and pressure, ‘rib’ is approximately the total volume occupied by the molecules themselves. ‘a’ and ‘b’ are called van der Waals constants and their value depends upon the nature of the gas.

Question 12.
What do the absolute zero and absolute scale of temperature stand for?
Answer:
The lowest possible hypothetical temperature of – 273°C at which gas is supposed to have zero volume is called Absolute! zero.

Absolute or Kelvin temperature is given by T, where
T = t°C + 273
t°C stands for the centigrade scale of temperature.

Thus, particle pressure of a. gas – Mole fraction of A × Total pressure.

Question 15.
Is there any effect of the nature of a liquid and temperature on the surface tension of a liquid?
Answer:

Question 16.
Leaving electrostatic forces that exist between oppositely charged ions, which other intermolecular attractive forces exist between atoms or ions. Mention them.
Answer:

Question 18.
What are the main characteristics associated with gases?
Answer:

Question 19.
What do you understand by the term? Isotherms and Isobars?
Answer:
Isotherms are the curves plotted by varying pressure against volume keeping temperature constant.

Each line obtained by plotting volume against temperature keeping, pressure constant is called an Isobar.

(ii) Now keeping the pressure constant at P2, heat the gas from temperature T1 to T2, the volume changes from V to V2.
By Charle’s Law, we must have,

The numerical value of k depends upon the amount of gas and the units in which P and V are expressed. By Avogadro’s law, for one mole of any gas, the value of \(\frac{PV}{T}\) will be the same and is represented
\(\frac{PV}{T}\) = R
or
PV = RT.
for n moles of an ideal gas
PV = nRT

Question 2.
State the fundamental assumptions of the kinetic theory of gases
Or
What are the postulates of the kinetic theory of gases?
Or
Write a short note on “Microscopic Model of a gas”.
Answer:
To explain the general properties of gases to provide some theoretical explanation for various gas laws (stated on basis of experimental studies), various, scientists Bernoulli, Clausius, Maxwells, Boltzmann and others, gave ‘Kinetic Theory of Gases’ which explains qualitatively as well as quantitatively the various aspects of gas behaviour.

The important postulates of the theory are:

Question 3.
Explain the following observations.
(a) Aerated water bottles are kept underwater during summer.
Answer:
Aerated water contains CO2 gas dissolved in an aqueous solution under pressure and the bottles are well stoppered. As in summer temperature increases and we know that the solubility of the gases decreases with increase in temperature and as a result move of gas is expected to be generated may be large in quantity and hence pressure exerted by the gas may be very high and the bottle may explode. So, to decrease the temperature and hence to avoid explosion of the bottles.

(b) Liquid ammonia bottle is cooled before opening the seal.
Answer:
Liquid ammonia bottle contains the gas under very high pressure. If the bottle is opened as such, then the sudden decrease in pressure will lead to a large increase in the volume of the gas. As a result, the gas will come out of the bottle with force. This will lead to the breakage of the bottle. Cooling under tap water will result in a decrease in volume. It reduces the chances of an accident.

(d) The size of the weather balloon becomes larger and larger as it ascends up to higher altitudes.
Answer:
Answered somewhere else in the book.

Since Pressure remains constant
∴ Charles law can be applied

Since temperature is constant, Boyle’s law is applied.

Question 8.
What volume of air will be expelled from a vessel containing 400 cm3 at 7° C when it is heated to 27° C at the same pressure?
Answer:
As the pressure is constant, Charles law is applied

Question 12.
The temperature at the foot of a mountain is 30°C and pressure is 760 mm. Whereas at the top of the mountain these are 0°C and 710 mm. Compare the densities of the air at the foot and at the top.
Answer: 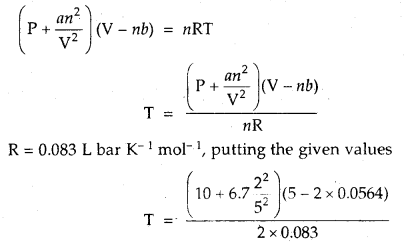 Question 25.
Calculate the pressure exerted by 110 g of CO2 in a vessel of 2 L capacity at 37°C. Given that the van der Waals constants are a = 3.59 L2 atm mol-2 and b = 0.0427 L mol-1. Compare the value with the calculated value if the gas were considered ideal.
Answer:
According to van der Waals equation