Here we are providing Class 11 chemistry Important Extra Questions and Answers Chapter 10 The s-Block Elements. Chemistry Class 11 Important Questions are the best resource for students which helps in Class 11 board exams.

Question 1
Which element is found in chlorophyll?
Answer:
Magnesium.

Question 2.
Name the elements (alkali metals) which form superoxide when heated in excess of air.
Answer:
Potassium, rubidium and caesium.

Question 3.
Why is the oxidation state of Na and K always + 1?
Answer:
It is due to their high second ionisation enthalpy and stability of their ions [Na+, K+].

Question 5.
Why do group 1 elements have the lowest ionisation enthalpy?
Answer:
Because of the largest size in their respective periods, solitary electron present in the valence shell can be removed by supplying a small amount of energy.

Question 8.
What is the general electronic configuration of alkali metals in their outermost shells?
Answer:
ns1 where n = 2 to 7.

Question 9.
What is meant by dead burnt plaster?
Answer:
It is anhydrous calcium sulphate (CaS04).

Question 11.
Which member of the alkaline earth metals family has
(i) least reactivity
Answer:
Be

Question 12.
Why does lithium show anomalous behaviour?
Answer:
Due to its small size and high charge/size ratio.

Question 13.
Out of LiOH, NaOH, KOH which is the strongest base?
Answer:
KOH.

Question 16.
Name an element that is invariably bivalent and whose oxide is soluble in excess of NaOH and its dipositive ion has a noble gas core.
Answer:
The element is beryllium (Be) which forms a divalent ion and has a noble gas core [He] 2s2
Be2+ = 1 s2
BeO + 2NaOH → Na2BeO2 + H2O

Question 20.
Why is the solution of an alkali metal in ammonia blue?
Answer:
Due to the presence of ammoniated electrons.

Question 21.
Beryllium oxide has a high melting point. Why?
Answer:
Due to its polymeric nature.

Question 22.
Mention the chief reasons for the resemblance between beryllium and aluminium.
Answer:
Both Be2+ and Al3+ ions have high polarising power.

Question 24.
Amongst alkali metals why is lithium regarded as the most powerful reducing agent in aqueous solution?
Answer:
Lithium is the best reducing agent because it has the lowest reduction potential:
Li+ + e– → Li(s) ERed = – 3.07V.

Question 27.
Why does table salt get wet in the rainy season?
Answer:
Table salt contains impurities of CaCl2 and MgCl which being deliquescent compounds absorb moisture from the air during the rainy season.

Question 28.
Sodium readily forms Na+ ion, but never Na2+ ion. Explain.
Answer:
After the removal of 1 electron from Na, it has been left with a noble gas core [Ne] which is closer to the nucleus and requires more energy.

Question 29.
Which compound of sodium is used
(i) as a component of baking powder
Answer:
NaHCO3

Question 30.
Anhydrous calcium sulphate cannot be used as Plaster of Paris. Give reason.
Answer:
Because it does not have the ability to set like plaster of Paris.

Question 31.
Which of the following halides is insoluble in water?
CaF2, CaCl2, CaBr2 and Cal2.
Answer:
CaF2.

Question 34.
Calcium metal is used to remove traces of air from vacuum tubes. Why?
Answer:
Calcium has a great affinity for oxygen and nitrogen.

Question 35.
Why is sodium kept in kerosene oil?
Answer:
To prevent its contact with oxygen and moist air, because sodium reacts with them.

Question 36.
What is brine?
Answer:
An aqueous solution of NaCl in water.

Question 39.
Lithium has the highest ionisation enthalpy in group-1, yet it is the strongest reducing agent. Why?
Answer:
This is because Li has the highest oxidation potential.
Li → Li+ + e–
E°ox = + 3.07

Question 40.
Name one reagent or one operation to distinguish between
(i) BeSO4 and BaSO4
Answer:
BeSO4 is soluble in water while BaSO4 is not.

Question 47.
Why is K more reactive than Na?
Answer:
Since the valence electron of K is relatively at a greater distance than Na & it requires lesser energy to remove it.

Question 50.
How is Potassium extracted?
Answer:
By electrolysis of a fused solution of KOH.

Question 1.
Why the solubility of alkaline metal hydroxides increases down the group?
Answer:
If the anion and the cation are of comparable size, the cationic radius ‘vill influence the lattice energy. Since lattice energy decreases much more than the hydration energy with increasing ionic size, solubility will increases as we go down the group. This is the case of alkaline earth metal hydroxides.

Question 2.
Why the solubility of alkaline earth metal carbonates and sulphates decreases down the group?
Answer:
If the anion is large compared to the cation, the lattice; energy will remain almost constant within a particular group. Since the hydration energies decrease down the group, solubility will decrease as found for alkaline earth metal carbonates and sulphates.

Question 7.
The hydroxides and carbonates of sodium and potassium are easily soluble in water while the corresponding salts of magnesium and calcium are sparingly soluble in water. Explain.
Answer:
Sodium and potassium ions (Na+ and K+) are larger than the corresponding Mg2+ and Ca2+ ions. Due to this lattice energy of Mg(OH)2, Ca(OH)2, MgCO3 and CaCO3. (Lattice energy is defined as the energy required to convert one mole of the ionic lattice into gaseous ions.

Question 8.
Why is it that the s-block elements never occur in free state/nature? What are their usual modes of occurrence and how are they generally prepared?
Answer:
The elements belonging to the s-block in the periodic table (i.e. alkali and alkaline earth metals) are highly reactive because of their low ionisation energy. They are highly electropositive forming positive ions. So they are never found in a free state.

They are widely distributed in nature in the combined state. They occur in the earth’s crust in the form of oxides, chlorides, silicates and carbonates.

Generally, a group I metals are prepared by the electrolysis of fused solution.
For example:

Question 9.
Explain what happens when
(i) Sodium hydrogen carbonate is heated.
Answer:

Question 10.
What is the effect of heat on the following compounds?
(a) Calcium carbonate
Answer:

Question 11.
Why is it that the s-block elements never occur in a free state? What are their usual modes of occurrence?
Answer:
The elements belonging to s-block in the periodic table. These metals (Alkali & alkaline earth metals) are highly reactive because of their low ionization energy. They are highly electropositive forming positive ions. So they are never found in a free state. They are widely distributed in nature in a combined state. They occur in the earth’s crust in the form of oxides, chlorides, silicates & carbonates.

Question 13.
What is the effect of heat on the following compounds:
(a) Calcium carbonate
Answer:

(c) Lithium on being heated in the air mainly forms mono-oxide & not the peroxides.
Answer:
Lithium is the least reactive but the strongest reducing agent of all the alkali metals. It combines with air, it forms mono-oxide only because it does not react with excess air.

Question 15.
Like Lithium in group-I, beryllium shows anomalous behaviour in group II. Write three such properties of beryllium which makes it anomalous in the group.
Answer:
1. Beryllium has an exceptionally small atomic size, due to high ionization energy & small atomic size it forms compounds that are largely covalent & its salts are hydrolysed easily.

3. The oxides & hydroxides of beryllium quite unlike the other elements, in this group are amphoteric in nature.

(b) Calcium carbonate is heated at a high temperature between 1070 – 1270 K. It decomposes to give calcium oxide & carbon dioxide.

Question 20.
Explain the following phenomenon by means of balanced equations:
(a) When exhaling is made through a tube passing into a solution of lime water, the solution becomes turbid.
Answer:
Ca(OH)2 (l) + CO2 (g) → CaCO3 (s) + H2O (l) 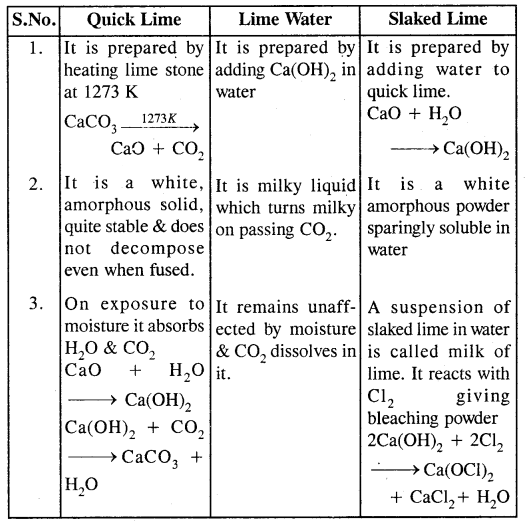 Question 25.
The mobilities of alkali metal ions in aqueous solution follow the order
Li+ < Na+ < K+ < Rb+ < Cs+ Give reasons.
Answer:
Smaller ions are expected to have more mobility. But smaller ions such as Li+, Na+ due to their higher charge density tend to undergo hydration. Hydration increases the mass & effective size of the smaller ion & as a result, the mobility of ions show the trend given.

Question 26.
How is sodium peroxide manufactured? What happens when it reacts with chromium (III) hydroxide? Give it’s two uses.
Answer:
Sodium peroxide is manufactured by heating sodium metal on aluminium trays in the air (free-from CO2).
2Na + O2 (air) → Na2O2

Question 28.
Why is LiF almost insoluble in water whereas LiCl is soluble not only in water but also in acetone?
Answer:
The low solubility of LiF is due to its high lattice enthalpy. LiCl has much higher solubility in water. This is due to the small size of Li+ ion & much higher hydration energy.

Question 29.
What happens when
(1) Calcium nitrate is heated,
Answer:

Question 1.
What raw materials are used for making cement? Describe the manufacture of Portland cement. What is its approximate composition?
Answer:
Raw materials: The raw materials required for the manufacture of cement are limestone, stone and clay, limestone in calcium carbonate, CaCO3 and it provides calcium oxide, CaO. Clay- is a hydrated aluminium silicate, Al2O3 2Si02.2H20 and it provides alumina as well as silica. A small amount of gypsum, CaS04.2H20 is also required. It is added in calculated quantity in order to adjust the rate of setting of cement.

The hot gases produce a temperature of about 1770-1870 K in the kiln. At this high temperature, the limestone and clay present in the slurry combine to form cement in the form of small pieces called clinker. This clinker is mixed with 2 – 3 % by weight of gypsum (CaSO4 .2H2O) to regulate the setting time and is then ground to an exceedingly fine powder. 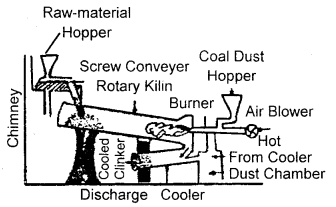 When mixed with water the cement reacts to form a gelatinous mass which sets to a hard mass when three-dimensional cross-links are formed between
…………..Si — O — Si……… and …….. Si — O — Al…… chains.

For a good quality cement, the ratio of silica (SiO2) and alumina (Al2O3) should be between 2.5 to 4.0. Similarly, the ratio of lime (CaO) to the total oxide mixtures consisting of SiO2, Al2O3 and Fe2O3 should be roughly 2: 1. If lime is in excess, the cement cracks during setting. On the other hand, if lime is less than required, the cement is weak in strength. Therefore, the proper composition of cement must be maintained to get cement of good quality.