Students who are going to appear for CBSE Class 12 Examinations are advised to practice the CBSE sample papers given here which is designed as per the latest Syllabus and marking scheme as prescribed by the CBSE is given here. Paper 1 of Solved CBSE Sample Paper for Class 12 Physics is given below with free PDF download solutions.

Question 1.
Define the term self-inductance of a coil. Write its S.I. unit

Question 3.
Why do the electrostatic field lines not form closed loops?

Question 4.
1-V graph for a metallic wire at two different temperatures, T1 and T2 is as shown in the figure. Which of the two temperature is lower and why?

Question 5.
Why does bluish colour predominate in a clear sky?

Question 6.
Use Kirchhoff’s rules to determine the potential difference between the points A and D when no current flows in the arm BE. 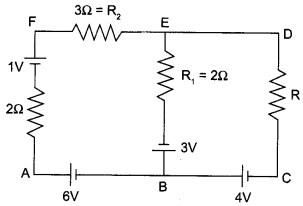 Question 7.
When an electron in hydrogen atom jumps from the excited state to the ground state, how would the de-Broglie wavelength associated with the electron change? Justify your answer.

Question 8.
You are given two converging lenses of focal lengths 1.25 cm and 5 cm to design a compound microscope. If it is desired to have a magnification of 30, find out the separation between the objective and the eyepiece.

Question 9.
Calculate the shortest wavelength in the Balmer series of hydrogen atom. In which region (infra-red, visible, ultraviolet) of hydrogen spectrum does this wavelength lie?

Question 10.
Write two factors which justify the need of modulation.

Question 11.
Draw a circuit diagram of a C.E. transistor amplifier. Briefly explain its working and write the expression for
(i) current gain
(ii) voltage gain of the amplifier.

Question 12.
State clearly how an unpolarised light gets linearly polarized when passed through a Polaroid.
(i) Unpolarised light of intensity I0 is incident on a Polaroid P1 which is kept near another Polaroid P2 whose pass axis is parallel to that of P1. How will the intensities of light, I1 and I2, transmitted by the Polaroids P1 and P2 respectively, change on rotating P1 without disturbing P2?
(ii) Write the relation between the intensities  I1 and I2.

Question 15.
Find the relation between drift velocity and relaxation time of charge carriers in a conductor. A conductor of length L is connected to a d.c. source of emf ‘E’. If the length of the conductor is tripled by stretching it, keeping ‘E’ constant, explain how its drift velocity would be affected.

Question 16.
(a) Determine the value of phase difference between the current and the voltage in the given series LCR circuit.

(b) Calculate the value of the additional capacitor which may be joined suitably to the capacitor C that would make the power factor of the circuit unity.

Question 17.
Write the expression for the generalized form of Amperes Circuital law. Discuss its significance and describe briefly how the concept of displacement current is explained through charging/ discharging of a capacitor in an electric circuit.

Question 18.
(a) Describe briefly three experimentally observed features in the phenomenon of photoelectric effect.
(b) Discuss briefly how wave theory of light cannot explain these features.

(a) Write the important properties of photons which are used to establish Einstein’s photoelectric equation.
(b) Use this equation to explain the concept
(i) threshold frequency and
(ii) stopping potential.

Question 19.
Use Huygens principle to show how a plane wavelength propagates from a denser to rarer medium. Hence verify Snell’s law of refraction.

Question 20.
Identify the gates P and Q shown in the figure . Write the truth table for the combination of the gates shown.

Name the equivalent gate representing this circuit and write its logic symbol.

Question 21.
(a) Write three characteristic properties of nuclear force.
(b) Draw a plot of potential energy of a pair of nucleons as a function of their separation. Write two important conclusions that can be drawn from the graph.

Question 23.
One morning an old lady tried bare-footed to replace the fuse wire fitted with power supply mains for her house. Suddenly she cried and collapsed on the floor. Her family members cried loudly for help. Her neighbour heard the cries and rushed to the spot wearing rubber soul shoes on. He took a wooden stick and used it to switch off the main supply.
Answer the folio wing questions :

Question 24.
(a) Define electric flux. Write its S.I. unit. “Gauss’s law in electrostatics is true for any closed surface, no matter what its shape or size is”. Justify this statement with the help of a suitable example.
(b) Use Gauss’s law to prove that electric field inside a uniformly charged spherical shell is zero.

Question 26.
(a) Consider two coherent sources S1 and S2 producing monochromatic waves to produce interference pattern. Let the displacement of the wave produced by S1 be given by y1 = a cos mt and the displacement by S2 be y2 = a cos (ωt + Φ). Find out the expression for the amplitude of the resultant displacement at a point and show that the intensity at that point will be I = 4a2 cos2 Φ/2. Hence establish the conditions for constructive and destructive interference.
(b) What is the effect on the interference fringes in Young’s double slit experiment when
(i) the width of the source slit is increased,
(ii) the monochromatic source is replaced by a source of white light. 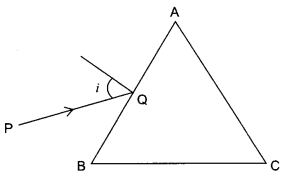 (a) A ray ‘PQ’ of light is incident on the face AB of a glass prism ABC (as shown in the figure) and emerges out of the face AC. Trace the path of the ray. Show that ∠i + ∠e = ∠A + ∠δ. Where δ and e denote the angle of deviation and angle of emergence respectively.
Plot a graph showing the variation of the angle of deviation as a function of angle of incidence. State the condition under which ∠δ is minimum.
(b) A ray of light passing through an equilateral triangular prism from air undergoes minimum deviation when angle of incidence is 3/4th of the angle of prism. Calculate the speed of light in the prism.

Answer 1.
L = Φ / I . If I = 1 then L = Φ i.e self inductance L of a coil is numerically equal to the amount of magnetic flux (Φ) linked with the coil when unit current flows through the coil. The S.I. unit of self inductance is henry (H) or weber per ampere.

Answer 2.
The basic mode of communication used in telephony is the point-to-point communications mode, which takes place through a link between a single transmitter and receiver.

Answer 4.
For the given figure the slope of a V – I graph is I/V = 1/R . Here the smaller the slope larger is the resistance . As the resistance of a metal increases with the increase in temperature, so resistance at T2 is more and T1 is lower.

Answer :
The light is scattered by air molecules. According to Lord Rayleigh the intensity of scattered light I ∝ 1/λ4. As λblue < λred Therefore blue colour scattered more in sky. 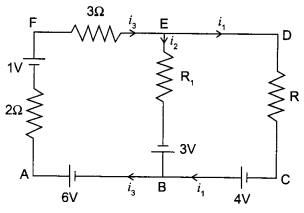 It is called Bohr’s frequency condition. 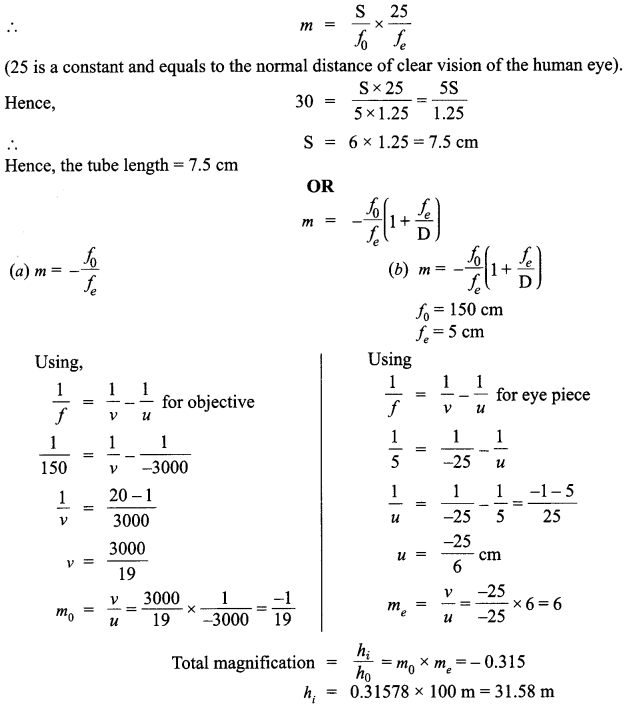 Answer 9.
The formula for wavelength (λ) by Balmer series is : 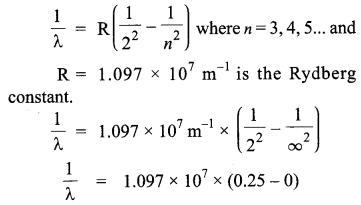 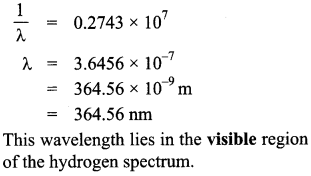 Answer 12.
Polaroid filters are made of a special material that is capable of blocking of the two planes of vibration of an electromagnetic wave. In this sense, a Polaroid serves as a device that filter out one-half of the vibrations upon transmission of the light through the filter. When unpolarised light is transmitted through a Polaroid filter, it emerge with one-half the intensity and with vibrations in a single plane; it emerges as polarized light.

Answer 14.
Field at an axial point of a circular coil.

Where N is the number of turns of the circular coil. If M =iA is the magnetic moment of the coil, then

Where p is electric dipole  moment.

Answer 15.
The drift velocity of electrons can be formulated as : 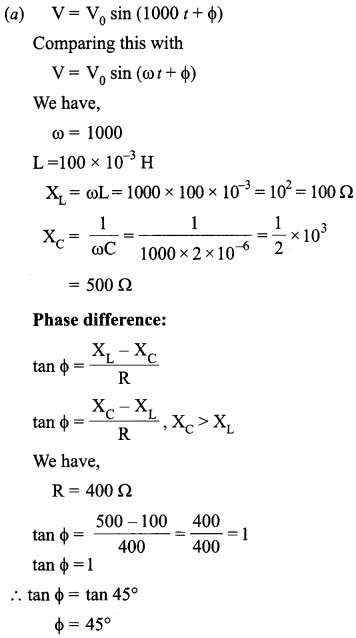 It signifies that the source of magnetic field is not just due to the conduction of electric current due to flow of charge but also due to the time rate of change of electric field called displacement current.

(b) Classical wave theory cannot explain :
(i) The existence of threshold frequency because it predicts that electrons would absorb enough energy to escape and there would not be any threshold frequency.
(ii) The almost immediate emission of photo electrons as, according to this theory, electrons require a period of time before sufficient energy is absorbed by it to escape from the metal; however such a thing does not happen practically; and
(iii) The independence of KE of photo electrons on intensity and dependence on frequency because it cannot explain why maximum KE is dependent on frequency and independent of intensity.

Answer 20.
Logic gate P is AND gate and logic Q is NOT gate.

The combination is NAND 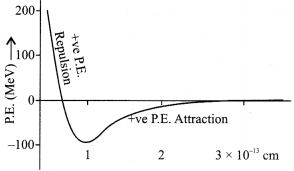 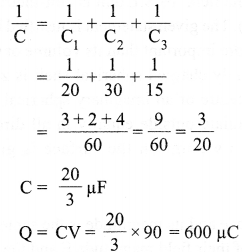 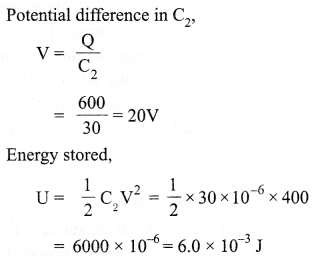 Answer 24.
(a) The electric flux through an area is defined as the electric field multiplied by the area of the surface projected on a plane, perpendicular to the field. Its S.I. unit is volt-metres (Vm) or Newton metres square per coulomb (Nm2 C-1 ). The given statement is justified because while measuring the flux, the surface area is more important than its volume or its size.
(b) To prove that the electric field inside a uniformly charged spherical shell is zero, we place a single positive point charge ‘q’ at the centre of an imaginary spherical surface with radius R. The field lines of this point radiate outside equally in all directions. The magnitude E of the electric field at every point on the surface is given by 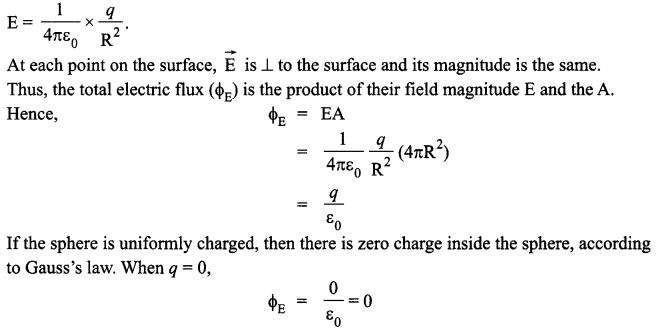 (a) When charging parallel plate capacitor, whose plate area is A and distance between the plate is d. When charge on capacitor is q, potential difference increase 0 to V. Hence average 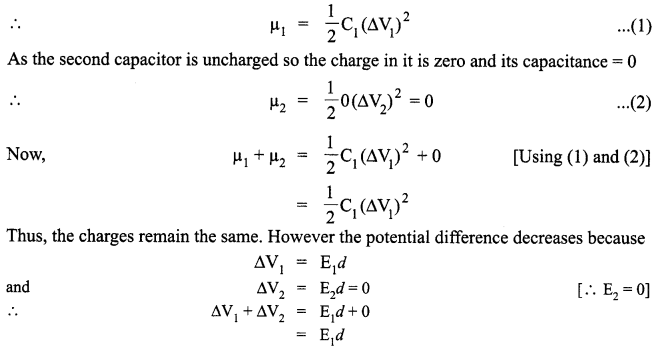 Answer 25.
The basic principle of a moving coil galvanometer is that when a current carrying coil is placed in a magnetic field, it experiences a torque. 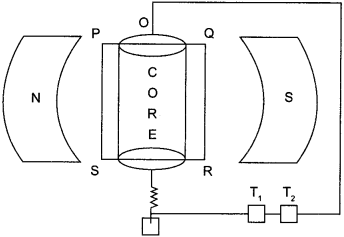 The voltage sensitivity is defined as the deflection produced in the galvanometer when a potential difference of IV is applied to the coil.
Thus, 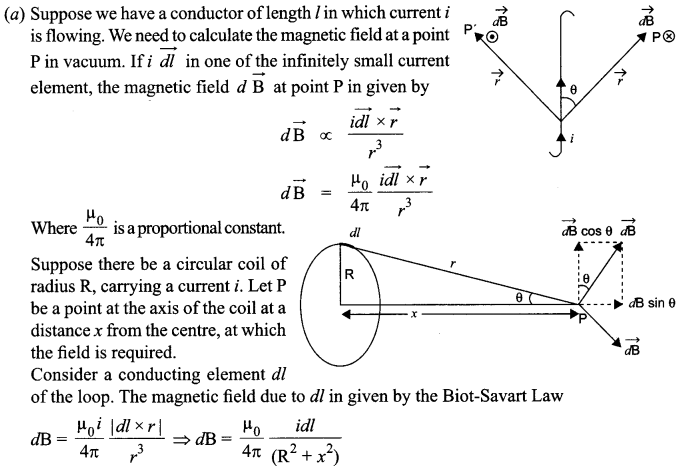 If the coil has N turns, then each turn will contribute equally to B. Then

Where μ0 in the permeability of free space. Ampere’s circuital law in electromagnetism is analogous to Gauss’ law in electrostatics.

Answer 26.
(a) Let S be a narrow slit illuminated by a monochromatic source of light, and Sj and S2 two similar parallel slits very close together and equidistant from S. 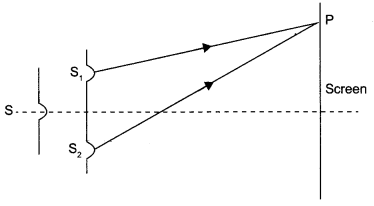 (b)  (i) As the width of the slits is increased, the fringe width decreases. It is because, 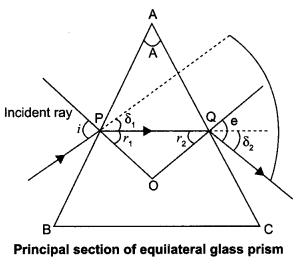 So angle of deviation produced by a prism depends upon the angle of incidence, refracting angle of prism, and the material of the prism. 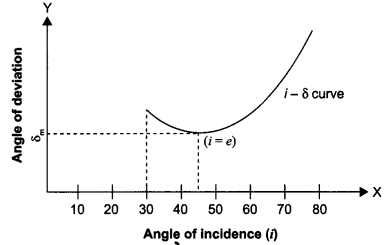 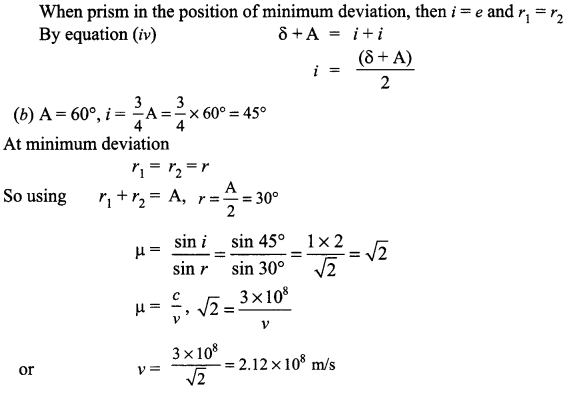