Students who are going to appear for CBSE Class 12 Examinations are advised to practice the CBSE sample papers given here which is designed as per the latest Syllabus and marking scheme as prescribed by the CBSE is given here. Paper 5 of Solved CBSE Sample Paper for Class 12 Economics is given below with free PDF download solutions.

Question 1.
What is meant by foregone cost in microeconomics?

Question 2.
The marginal revenue curve cuts the horizontal line between 7-axis and the demand curve into
(a) two unequal parts
(b) two equal parts
(c) Either (a) or (b)
(d) None of these

Question 4.
How production function establishes a technical relationship and not an economic relationship?

Question 5.
Price Elasticity of Demand (Ed) of a commodity is 2. If the quantity demanded increases by 1%, what is the percentage change in price?

Question 6.
State the conditions in which the production possibility curve can rotate outwards.
Or
Explain the major differences between the two branches of economics.

Question 7.
State the Law of Demand and the assumptions of Law of Demand.
Or
Discuss in brief the various kinds of demand.

Question 10.
What do you understand by demand schedule and demand curve? Explain with the help of an example and a diagram.

Question 12.
Maruti, Tata, Fiat, Ford and GM are only a few auto producers in .the Indian market. Identify the form of market in which they sell their products and also explain its features. If these companies decide to form a cartel, then will the consumer stand to benefit?

Question 13.
Kuzira is a remote village in South Africa where people use animal skins to purchase goods. Which form of money is being used by them?

Question 15.
If borrowings and other liabilities are added to the budget deficit, we get
(a) fiscal deficit ,
(b) primary deficit
(c) capital deficit
(d) revenue deficit

Question 16.
Name the rate at which Central Bank gives loan to commercial banks for short-term.

Question 18.
Derive the formula,
\(K=\frac { 1 }{ MPS } \)
where K = Investment multiplier
MPS = Marginal Propensity to save
Or
Complete the following table :

Question 20.
Anthony and Ajay were having a conversation on the topic of ‘money supply’. Anthony was of the view that since money supply consists of supply it is a flow concept, whereas Ajay was of the view that it is a stock concept. In your view, which of the two is correct? Why? Also explain the concept of money supply.
Or
Explain the following functions of the Central Bank.
(i) Bank of issue
(ii) Custodian of Foreign Exchange Reserves

Answer 1.
Forgone cost for a commodity is the amount of the other commodity that has been foregone in order to produce the first or in other words, it is the cost of next best opportunity foregone.

Answer 3.
When average cost rises, the marginal cost also rises and it exceeds the average cost.

Or
The various kinds of demand are as follows:

(Note It has been assumed that market consists of two households only)
Demand Curve A demand curve is the graphical representation of demand schedule showing the relationship between price of the commodity and its demand. It is a downward sloping curve.
Demand curve is of two types as given below:
(i) Individual Demand Curve A curve which shows the various quantities of a commodity demanded by a particular household at various levels of price is known as individual demand curve. It is the graphical representation of individual demand schedule. 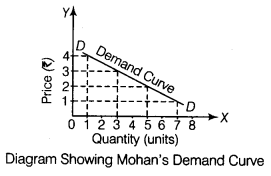 (ii) Market Demand Curve Market demand curve is the horizontal summation of individual demand curve i.e. it is a curve which shows the various quantities of a commodity demanded by the whole market at various prices. It is the graphical representation of market demand schedule. 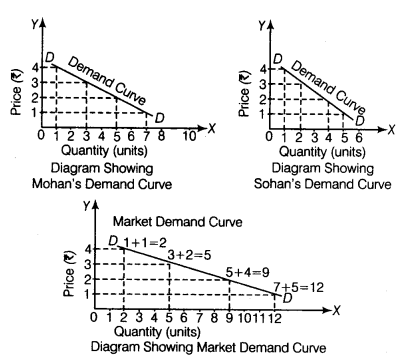 Answer 12.
These cbmpanies sell their products in oligopoly market. Oligopoly is a form of market in which there are a few big sellers of a commodity and a large number of buyers.
Its main features are explained below ;

If these companies form cartel, then this would lead to non-price competition and the consumer would be exploited.

Answer 13.
The natives of Kuzira village are using commodity money.

Answer 16.
Repo rate is the rate at which Central Bank gives loan to the commercial banks for 1 to 14 days against approved securities. 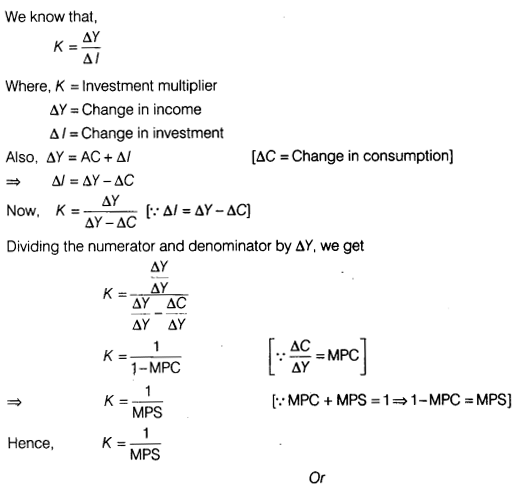 Answer 22.
Steps taken for derivation of consumption curve are:

Or
Steps taken for derivation of saving curve are: 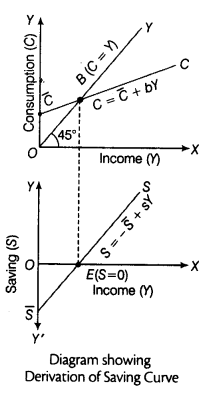 Answer 24.
(i) Difference between autonomous items and accommodating items of BoP are :

(ii) Difference between current and capital account of BoP are: