The total number of entities present in one mole of any substance is equal to 6.022 × 1023. This number is called Avogadro number which is named after the Italian physicist Amedeo Avogadro who proposed that equal volume of all gases under the same conditions of temperature and pressure contain equal number of molecules. Avogadro number does not have any unit.

In a chemical reaction, atoms or molecules react in a specific ratio. Let us consider the following examples 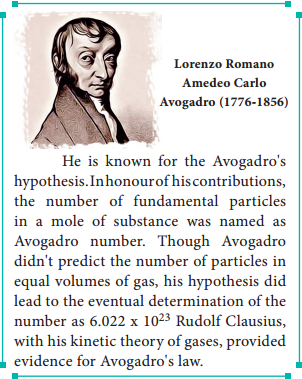 Molar mass is defined as the mass of one mole of a substance. The molar mass of a compound is equal to the sum of the relative atomic masses of its constituents expressed in g mol-1.

The volume occupied by one mole of any substance in the gaseous state at a given temperature and pressure is called molar volume.