The term ‘acid’ is derived from the latin word ‘acidus’ meaning sour. We have already learnt in earlier classes that acid tastes sour, turns the blue litmus to red and reacts with metals such as zinc and produces hydrogen gas. Similarly base tastes bitter and turns the red litmus to blue.

These classical concepts are not adequate to explain the complete behaviour of acids and bases. So, the scientists developed the acid – base concept based on their behaviour.

Let us, learn the concept developed by scientists Arrhenius, Bronsted and Lowry and Lewis to describe the properties of acids and bases.

One of the earliest theories about acids and bases was proposed by swedish chemist Svante Arrhenius. According to him, an acid is a substance that dissociates to give hydrogen ions in water. For example, HCl, H2SO4 etc., are acids. Their dissociation in aqueous solution is expressed as

The H+ ion in aqueous solution is highly hydrated and usually represented as H3O+, the simplest hydrate
of proton [H(H2O)]+. We use both H+ and H3O+ to mean the same.

Similarly a base is a substance that dissociates to give hydroxyl ions in water. For example, substances like NaOH, Ca(OH)2 etc., are bases.

When hydrogen chloride is dissolved in water, it donates a proton to the later. Thus, HCl behaves as an acid and H2O is base. The proton transfer from the acid to base can be represented as

When ammonia is dissolved in water, it accepts a proton from water. In this case, ammonia (NH3) acts as a base and H2O is acid. The reaction is represented as

Let us consider the reverse reaction in the following equilibrium

H3O+ donates a proton to Cl– to form HCl i.e., the products also behave as acid and base. In general,
Lowry – Bronsted (acid – base) reaction is represented as

The species that remains after the donation of a proton is a base (Base1) and is called the conjugate base of the Bronsted acid (Acid1). In other words, chemical species that differ only by a proton are called conjugate acid – base pairs.

(i) Substances like BF3, AlCl3 etc., that do not donate protons are known to behave as acids.

A Lewis acid is a positive ion (or) an electron deficient molecule and a Lewis base is a anion (or) neutral molecule with at least one lone pair of electrons.

Les us consider the reaction between Boron tri flouride and ammonia.

Here, boron has a vacant 2p orbital to accept the lone pair of electrons donated by ammonia to form a new coordinate covalent bond. We have already learnt that in coordination compounds, the Ligands act as a Lewis base and the central metal atom or ion that accepts a pair of electrons from the ligand behaves as a Lewis acid. 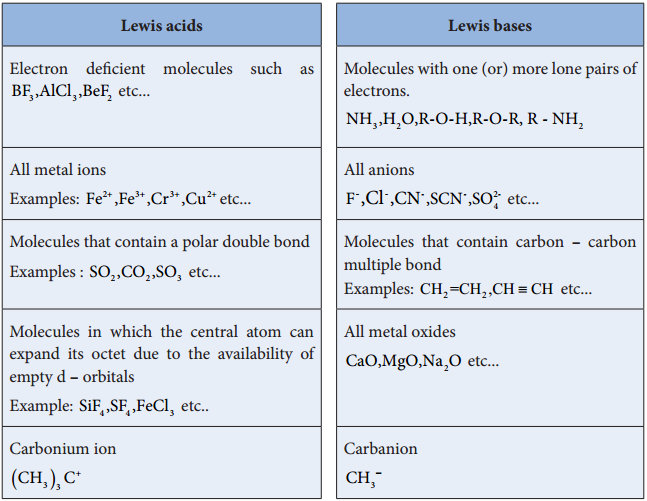