Respiration is responsible for generation of ATP. The discovery of ATP was made by Karl Lohman (1929). ATP is a nucleotide consisting of a base-adenine, a pentose sugar-ribose and three phosphate groups. Out of three phosphate groups the last two are attached by high energy rich bonds (Figure 14.3). On hydrolysis, it releases energy (7.3 K cal or 30.6 KJ/ATP) and it is found in all living cells and hence it is called universal energy currency of the cell. 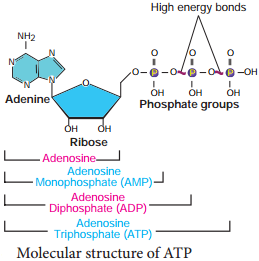 ATP is an instant source of energy within the cell. The energy contained in ATP is used in synthesis carbohydrates, proteins and lipids. The energy transformation concept was established by Lipman (1941).

ATP is a nucleotide that consists of three main structures: the nitrogenous base, adenine; the sugar, ribose; and a chain of three phosphate groups bound to ribose. The phosphate tail of ATP is the actual power source which the cell taps.

The structure of ATP is a nucleoside triphosphate, consisting of a nitrogenous base (adenine), a ribose sugar, and three serially bonded phosphate groups. ATP is commonly referred to as the “energy currency” of the cell, as it provides readily releasable energy in the bond between the second and third phosphate groups.

It allows the cell to store energy briefly and transport it within the cell to support endergonic chemical reactions. The structure of ATP is that of an RNA nucleotide with three phosphates attached. As ATP is used for energy, a phosphate group or two are detached, and either ADP or AMP is produced.

ATP is composed of ribose, a five-carbon sugar, three phosphate groups, and adenine, a nitrogen-containing compound (also known as a nitrogenous base).

From the perspective of biochemistry, ATP is classified as a nucleoside triphosphate, which indicates that it consists of three components: a nitrogenous base (adenine), the sugar ribose, and the triphosphate.

Give three examples of how ATP is used in organisms. ATP is used to build large molecules such as proteins, to temporarily store energy in the form of fat, and to allow for all types of cellular transport.

Its Structure. The ATP molecule is composed of three components. These phosphates are the key to the activity of ATP. ATP consists of a base, in this case adenine (red), a ribose (magenta) and a phosphate chain (blue).

All living things, plants and animals, require a continual supply of energy in order to function. The energy is used for all the processes which keep the organism alive. This special carrier of energy is the molecule adenosine triphosphate, or ATP.

The process of phosphorylating ADP to form ATP and removing a phosphate from ATP to form ADP in order to store and release energy respectively is known as the ATP cycle. The energy within an ATP molecule is stored in the phosphate bonds of the ATP. When a cell needs energy, a phosphate is removed from ATP.

Any metabolic process that requires oxygen to occur is referred to as aerobic. Humans, most other multicellular organisms, and some microorganisms require oxygen for the efficient capture of the chemical energy from food and its transformation into the cellular energy form known as ATP.

Energy is stored in the bonds joining the phosphate groups (yellow). The covalent bond holding the third phosphate group carries about 7, 300 calories of energy.

Adenosine triphosphate (ATP), energy-carrying molecule found in the cells of all living things. ATP captures chemical energy obtained from the breakdown of food molecules and releases it to fuel other cellular processes.

For example, both breathing and maintaining your heartbeat require ATP. In addition, ATP helps to synthesize fats, nerve impulses, as well as move certain molecules into or out of cells. Some organisms, such as bioluminescent jellyfish and fireflies, even use ATP to produce light.

All organisms need energy. Life depends on the transfer of energy. ATP is an important source of energy for biological processes. In photosynthesis energy is transferred to ATP in the light-dependent stage and the ATP is utilised during synthesis in the light-independent stage.

ATP is required for various biological processes in animals including; Active Transport, Secretion, Endocytosis, Synthesis and Replication of DNA and Movement.

The Adenosine triphosphate (ATP) molecule is the nucleotide known in biochemistry as the “molecular currency” of intracellular energy transfer; that is, ATP is able to store and transport chemical energy within cells. ATP also plays an important role in the synthesis of nucleic acids.

Beginning with energy sources obtained from their environment in the form of sunlight and organic food molecules, eukaryotic cells make energy-rich molecules like ATP and NADH via energy pathways including photosynthesis, glycolysis, the citric acid cycle, and oxidative phosphorylation.