It is the most common protozoan pathogen and is worldwide in distribution. The diseaseis very high in areas with low sanitation, especially tropics and subtropics.

Giardia lamblia lives in the duodenum and upper jejunum of human. It is the only protozoan parasite found in the lumen of the human small intestine.

It exists in two forms

The trophozoite is in the shape of a tennis or badminton racket. It is rounded anteriorly and pointed posteriorly. The size of the trophozoite is 14 µ long by 7µ broad. Dorsally, it is convex and ventrally, it has a concave sucking disc which helps in its attachment to the intestinal mucosa.

It is bilaterally symmetrical. All the organs of the body are paired. Trophozoite of Giardia possess, 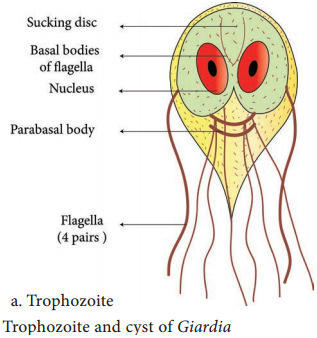 It is the infective form of the parasite. The cyst is small and oval, measuring 12 µm × 8 µm and is surrounded by a hyaline cyst wall.

Its internal structure includes 2 pairs of nuclei grouped at one end. A young cyst contains 1 pair of nuclei. The axostyle lies diagnonally, forming a dividing line within cyst wall (Figure 8.6b). 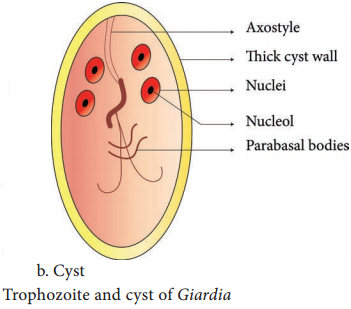 Human acquires infection by ingestion of cyst in contaminated water and food. Direct person – to person transmission occurs in children. Transmission occurs through oral-anal and oral-genital route in sexually active homosexual males. Within half an hour of ingestion, the cyst hatches out into two trophozoites, which multiply by binary fission and colonize in the duodenum.

The trophozoites live in the duodenum and upper part of jejunum, feeding by pinocytosis. When conditions in duodenum are unfavourable, encystment occurs, usually in large intestine. Cysts are passed in stool and remain viable in soil and water for several weeks (Figure 8.7). Giardia lamblia does not invade the tissue, but remains attached to intestinal epithelium by means of the sucking disc. It causes a disturbance of intestinal function leading to malabsorption of fat.

Incubation period is variable, but is usually about 2 weeks.

The disease is asymptomatic, but in some cases it may lead to abdominal cramps, flatulence, looseness of bowels, foul smelling stool and mild steatorrhoea (passage of yellowish and greasy stools in which there is excess of fat). The stool contains excess mucus and fat but no blood and pus.

Examination of stool sample:
Giardiasis can be diagnosed by identification of cysts of Giardia lamblia in the formed stools and the trophozoites and cyst of the parasite in diarrhoeal stools.

Macroscopic examination of stool:
Fecal specimens containing Giardia lamblia may have an offensive odor. It is pale coloured with fatty substance floating in water.

Microscopic examination of stool:
Cysts and trophozoites can be found in diarrheal stools by saline and iodine wet preparations (Figure 8.8).

Molecular methods:
DNA probes and polymerase chain reaction (PCR) have been used to demonstrate parasitic genome in the stool specimen.

Metronidazole and Tinidazole are the drugs of choice.

Giardiasis can be prevented and controlled by,