Students can access the CBSE Sample Papers for Class 10 Social Science with Solutions and marking scheme Set 4 will help students in understanding the difficulty level of the exam.

Question 3.
The Non-Cooperation programme was adopted in the
(a) Lahore Session
(b) Nagpur Session
(c) Gujarat Session
(d) Second Round Table Conference

Question 4.
Fill in the blank:
Everything available in our …………….. which can be used to satisfy our needs.
Or
People employed in the ………………… activities manufacture the primary materials into finished goods.

Question 7.
Identify the important highways of India with the help of the following features.

Question 8.
On the basis of ownership industries are categorised as:
(a) large-scale and small-scale industries
(b) public sector, private sector, joint and cooperative sectors
(c) basic/key and consumer industries
(d) agro-based and mineral-based industries

Question 10.
Name the country who does not have federal system.
Or
What is the most distinctive feature of democracy?

Question 11.
What is a community government?
Or
What is partisanship?

Question 12.
Read the given data which gives an estimate of reserves of crude oil. Select the correct option which defines how it is essential for the development process of a country.

Source: BP Statistical Review of World Energy, June 2018
(a) If prices of crude oil increase this becomes a burden for all.
(b) Reserves of crude oil are going to last for 50 years and more.
(c) Middle East and USA may face energy crisis in future due to exhaustion of crude oil.
(d) Crude oil is a major source of energy for agriculture and industrial development.

Question 13.
Read the information given below and select the correct option.

Chinese manufacturers learn of an opportunity to export toys to India, where toys are sold at a high price. They start exporting plastic toys to India. Buyers in India now have the option of choosing between Indian and the Chinese toys. Because of the cheaper prices and new designs, Chinese toys become more popular in the Indian markets. Within a year, 70 to 80 percent of the toy shops have replaced Indian toys with Chinese toys.

Removing barriers or restrictions set by the government on foreign trade and foreign investment is known as:
(a) Nationalisation
(b) Globalisation
(c) Liberalisation
(d) Taxation

Trade barrier is a restriction set by the government to regulate the trade of the country. How will trade bander affect the Chinese producers? Choose the correct option.
(a) If there is trade barrier on the Chinese toys then the cost of the Chinese toys in the Indian market would be high and will not be able to flourish in the market.
(b) The Chinese producers have to stop selling their products to the Indian market and look for some other ventures.
(c) Both (a) and (b)
(d) None of these

Question 16.
In the question given below, there are two statements marked as Assertion (A) and Reason
(R). Read the statements and choose the correct option:
Assertion (A): Not every goods or service that is produced and sold needs to be counted to known the total production in each sector.
Reason (R): The value of final goods already includes the value of all the intermediate goods. Options:
(a) Both A and R are true and R is the correct explanation of A.
(b) Both A and R are true but R is not the correct explanation of A.
(c) A is true but R is false.
(d) A is false but R is true.

Question 17.
Enumerate some features of the conservative regimes set up in Europe following the defeat of Napoleon in 1815.

Question 18.
What is meant by the idea of Satyagraha?
Or
Mention three reasons by which the rich peasant communities took active participation in the Civil Disobedience Movement.

Question 19.
Why is iron and steel industry called the basic industry? Explain any three reasons.

Question 20.
“Lack of internal democracy within parties is the major challenge to political parties all over the world.” Analyse the statement.
Or
Why were the linguistic states created? What are their advantages?

Question 22.
Which three efforts should be made by any country to improve its HDI?

Question 23.
Read the source given below and answer the questions that follows. (4 × 1 =4)

Economists began to think in terms of the national economy. They talked of how the nation could develop and what economic measures could help forge this nation together. ‘The aim of the zollverein is to bind the Germans economically into a nation. It will strengthen the nation materially as much by protecting its interests externally as by stimulating its internal productivity. It ought to awaken and raise national sentiment through a fusion of individual and provincial interests. The German people have realised that a free economic system is the only means to engender national feeling.’

Question 23.1.
What did experts discuss the national economy?
(a) Development of Germany
(b) Economic measurement that forges this nation together
(c) Both (a) and (b)
(d) Restoration of power after 1815

Question 23.2.
Identify the country which initiated the Zollverein from the following options.
(a) Austria
(b) Prussia
(c) Russia
(d) Switzerland

Question 23.3.
Highlight the role of Zollverein in arousing the sentiments of Nationalism amongst Germans from the following options.
(a) Zollverein made a unified economic territory.
(b) It consolidated the national sentiment through a fusion of individual and provincial
(c) It introduced a common currency for all.
(d) All of the above

Question 23.4.
From whose writing these sentences ‘The aim of the Zoilverein is …… .‘ have been quoted’?
(a) Friedrich List
(b) Ernst Renan
(c) Philip Veit
(d) Louis Bonaparte

Plantation is also a type of commercial farming. In this type of farming, a single crop is grown on a large area. The plantation has an interface of agriculture and industry. Plantations cover large tracts of land, using capital intensive inputs, with the help of migrant labourers. All the produce is used as raw material in respective industries.

Question 24.2.
In commercial farming, a single crop is grown on a large area. Identify which state the
following crops mainly belong to:

Question 24.3.
Which commercial crops cultivable in laterite soils?
(a) Rubber and sugarcane
(b) Cotton and jute
(c) Barley and gram
(d) Tea and coffee

Question 24.4.
Which of the following statements is incorrect in context of plantation farming?
(a) It is practised in areas where population pressure on land is high.
(b) It has an interface of agriculture and industry.
(c) It requires well-developed network of transport and communication connecting the
plantation areas.
(d) None of these

Party system is not something any country can choose. It evolves over a long time, depending on the nature of society, its social and regional divisions, its history of politics and its system of elections. These cannot be changed very quickly. Each country develops a party system that is conditioned by its special circumstances. For example, if India has evolved a multiparty system, it is because the social and geographical diversity in such a large country is not easily absorbed by two or even three parties. No system is ideal for all countries and all situations.

Question 25.1.
India has adopted a multi-party system because-
(a) this system keeps people informed about the political activities.
(b) this system allows a variety of interests and opinions to enjoy political representation.
(c) the second and geographical diversity in such a large country is not easily absorbed by two or even three parties.
(d) All of these

Question 25.2.
Each country develops a ……………. that is considered by its special circumstances.
(a) national party
(b) party system
(c) series of functions
(d) political system

Question 25.3.
Why is one party system not considered a good democratic system? Choose the correct option.
(a) It provides a political choice to the people.
(b) People are deprived of the right of electing representatives.
(c) It has no democratic option.
(d) Both (b) and (c)

Question 25.4.
We need at least two parties in a democratic set up because-
(a) it gives a fair chance to the two parties to compete in election to come in power.
(b) it gives a chance to take inspiration from country’s culture and values.
(c) it reduces a vast multitudes of opinions.
(d) it implements the policies by winning popular support through elections.

Question 26.
Read the source given below and answer the following questions. (4 × 1 =4)

Ford Motors, an American company, is one of the world’s largest automobile manufacturers with production spread over 26 countries of the world. Ford Motors came to India in 1995 and spent Rs. 1700 crore to set up a large plant near Chennai. This was done in collaboration with Mahindra and Mahindra, a major Indian manufacturer of jeeps and trucks. By the year 2017, Ford Motors was selling 88,000 cars in the Indian markets, while another 1,81,000 cars were exported from India to South Africa, Mexico, Brazil and United States of America. The company wants to develop Ford India as a component supplying base for its other plants across the globe.

Question 26.3.
The appropriate reason for the attraction of foreign companies to invest in India is-
(a) global competition
(b) flexibility in labour law
(c) trade barrier
(d) international trade

Question 26.4.
Ford Motors can be termed as a MNC. By setting up their units in India, Ford Motors wants to-
(a) utilize the low-cost production benefits and a large market.
(b) produce different types of automobiles.
(c) be a large-scale exporter of cars.
(d) collaborate with a leading Indian Automobile company.

Question 27.
How did the Salt Satyagraha become an effective tool of resistance against British colonialism in India during 1930? Explain.
Or
“Nationalism spreads when people begin to believe that they are all part of the same nation.” Support the statement.

Question 29.
Explain with examples the accommodative experience of Belgium for peace and harmony.

Question 30.
“Political parties are a necessary condition for a democracy.” Analyse the statement with examples.

Question 31.
What steps should be taken to create more employment? Explain.
Or
Why should the banks and cooperatives provide more loan facilities to the rural households in India. Give five reasons.

Question 32.1
Two places A and B have been marked on the given outline map of India. Identify and write
their correct names on the lines drawn near them.
(A) The place where the Indian National Congress Session was held.
(B) The city related to Jallianwala Bagh incident. 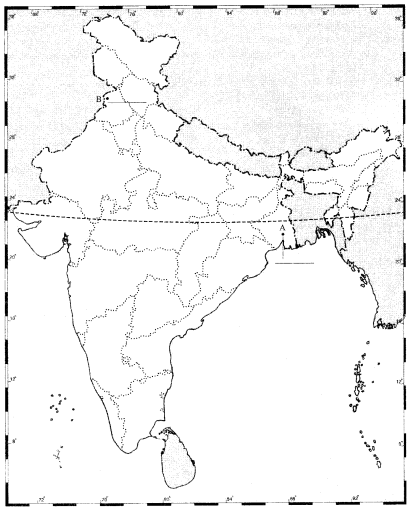