Students can access the CBSE Sample Papers for Class 10 Science with Solutions and marking scheme Set 1 will help students in understanding the difficulty level of the exam.

Question 2.
Name the gases which have replaced CFCs.
Answer:

Question 3.
When calcium oxide is added to water, it completely dissolves in water without forming bubbles. What product is formed in this reaction?
Answer:
Ca(OH)2

Question 4.
A plant gets rid of excess water through transpiration. What is the method used by plants to get rid of solid waste products?
Answer:
Shedding of yellow leaves

Question 6.
State the direction of magnetic field in the following case.
Answer:

Perpendicular to the plane of paper in the outward direction by using Fleming’s left hand rule.

Question 7.
Why covalent compounds have low melting and boiling points?
OR
What is catenation?
Answer:
As the bond is formed by sharing of electrons between two atoms. Intermolecular forces are small between the covalent compounds. These bonds break easily.
OR
Carbon has the unique ability to form bonds with the other atoms of carbon which gives rise to large molecules. This property of self linking is called catenation.

Question 10.
List two functions performed by the testis in human beings.
OR
What happens when a mature spirogyra filament attains considerable length?
Answer:

OR
Its filament breaks up into smaller fragments or pieces, and each fragment grows into a new filament/individual.

Question 11.
Name two human traits that show variations.
OR
How does the creation of variations in a species promote survival?
Answer:
Colours of eyes and shape of external ears.
OR
Variations increases the adaptability of an organism to its changing environmental conditions.

Assertion (A) and Reason (R)
For question numbers 14,15 and 16, two statements are given- one labeled Assertion (A) and the other labeled Reason (R). Select the correct answer to these questions from the codes (i), (ii), (iii) and (iv) as given below:

Question 14.
A. Magnetic field lines have both direction and magnitude.
R. The field lines, emerge from the north pole and merge at south pole
OR
A. Compass is a small magnet and gives direction of magnetic field lines.
R. It gets deflected when brought near a bar magnet.
Answer:
(ii) OR (i)

Question 15.
A. Copper does not displace hydrogen from dilute acids.
R. Copper is less reactive than hydrogen.
Answer:
(i)

Question 17.
Read the following and answer any four questions from 17 (i) to 17 (v) (4 × 1 = 4)
The table below shows the results of different experiment conducted on two acids X and Y of equal concentration:

Question 18.
Read the following and answer any four questions from 18 (i) to 18 (v) (4 × 1 = 4)
Answer:
Ohm’s law gives the relationship between current flowing through a conductor with potential difference across it provided the physical conditions and temperature remains constant. The electric current flowing in a circuit can be measured by an ammeter.

(i) Graphs between electric current and potential difference across two conductors A and B are shown in the figure. Which of the following conductor has more resistance? 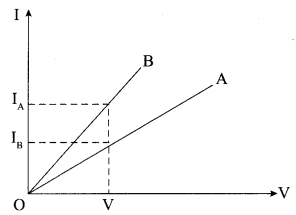 (ii) Seven identical lamps of resistance 220 Ω each are connected to a 220 V line as shown in figure. Then reading of the ammeter will be:

(iii) For metallic conductor voltage uses current graph is shown at two different temperatures T1 and T2. From the graph it follows: 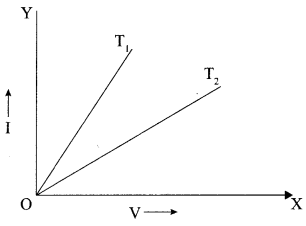 Question 19.
Read the following and answer any four questions from 19 (i) to 19 (v) (4 × 1 = 4)
Answer:
A student took HC1 in a conical flask and was placed on a white tile with cross mark. When seen through the flask the mark was visible. On adding some sodium thiosulphate in the flask the cross marked disappeared when seen through the flask. The student observed some reaction as

(v) Which of the following reaction is of similar type as observed in the given set up.

Question 20.
Read the following and answer any four questions from 20 (i) to 20 (v) (4 × 1 = 4)
Answer:
Analyse the following observation table showing variation of image distance (v) with object distance (u) in case of a convex lens and answer the questions that follow, without doing any calculations:

(v) If a convex lens is used to focus sunlight on a paper, where the paper should be placed so that it catches fire.
(a) At centre of curvature
(b) At principal focus.
(c) At optical centre of lens
(d) At 25 cm away from lens
Answer:
(i) (d) From S.No.3 we can say that the radius of curvature of the lens is 30 cm because when an object is placed at the centre of curvature of a convex lens its image is formed on the other side of the lens at the same distance from the lens. And, we also know that focal length is half of the radius of curvature. Thus, focal length of the lens is + 15 cm.

(ii) (d) S.No.6 is not correct as the object distance is between focus and pole, so for such cases the image formed is always virtual but in this case it is written that a real image is formed as the image distance is positive.

Question 21.
A 5 cm tall object is placed perpendicular to the principal axis of a convex lens of focal length 18 cm at a distance of 12 cm from it. Use lens formula to determine the position, size and nature of image formed.

(ii) Why is it that non-metals do not displace hydrogen from dilute acids?
Answer:
(i) Al2O3, H2O and ZnO are amphoteric oxides.
(ii) Non-metals cannot loose electrons so that H+ ions from acids become hydrogen gas and thus, cannot be displaced.

Question 24.
Find the current drawn from the battery by the network of four resistors shown in the figure.
Answer: 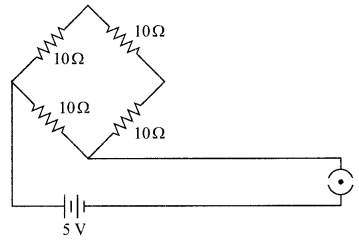 Equivalent resistance of the given network is

Question 26.
Why is respiration considered as exothermic reaction? Explain.
OR
(i) Hydrogen being a highly inflammable gas and oxygen being a supporter of combustion, yet water which is a compound made up of hydrogen and oxygen is used to extinguish fire. Why?

(ii) What change in colour is observed when silver chloride is left exposed to sunlight? What type of chemical reaction is this?
Answer:
In respiration, glucose gets oxidized to form carbon dioxide, water and heat is evolved.
As heat energy is released during respiration it is regarded as an exothermic reaction.
OR
(i) It is because properties of compound (H2O) are different from properties of its constituting elements, i.e., H2 and O2.
(ii) Silver turns black, the reaction is decomposition.

Question 28.
Describe briefly the three ways in which individual with a particular trait may increase in population.
Answer:

Question 29.
How do Mendel’s experiments show that traits may be dominant or recessive?
Answer:
Mendel conducted a monohybrid cross with pea plants, and he observed that one of the contrasting characters disappears in F1 generation. This character reappears in F2 generation (obtained by selfing F1) in just 25% of the progeny.

Question 30.
Study the given flow chart and answer the below given questions.

Question 31.
Samples of four metals A,B, C and D were taken and added to the following solutions one by one. The results obtained have been tabulated as follows.

Use the table above to answer the following questions about metals A, B, C and D.
(i) Which is the most reactive metal?
(ii) What would you observe if B is added to a solution of copper (II) sulphate?
(iii) Arrange the metals A, B, C and D in the order of decreasing reactivity.
Answer:
(i) B is most reactive.
(ii) Blue colour of copper sulphate solution disappears and reddish brown copper metal is deposited on the metal B.
(iii) B > A > C > D is the order of reactivity.

Question 32.
Foetus derives its nutrition from the mother.
(i) Identify the tissue used for above purpose. Explain its structure.
(ii) Explain how wastes generated by developing embryo are removed.
(iii) How does the birth of child take place?
Answer:
(i) Placenta is a special tissue connection between embryo and uterine wall. It acts as an endocrine gland. It possesses villi that increases the surface area for absorption of nutrients. Facilitates passage of nutrition and oxygen to embryo from mother through blood.

(ii) Waste substances produced by embryo are removed through placenta into mother’s blood.

Question 33.
(i) Show the formation of Na2O by transfer of electrons between the combining atoms.
(ii) Why are ionic compounds usually hard?
(iii) How is it that ionic compounds in the solid state do not conduct electricity, but they do so when in molten state?
OR
(i) Which product is formed in the chemical reaction between a small strip of magnesium and nitric acid?
(ii) What happens when a pellet of sodium is dropped in water?
(iii) Identify the ‘X’ in the given reaction: P4(s) + SO2(g) → X
Answer:

(ii) Ionic compounds are hard due to strong force of attraction between oppositely charged i0ns.

(iii) In solid-state, ions are not free to move, whereas in molten state ions are free to move. Therefore, they conduct electricity in a molten state.
OR
(i) Mg(NO3)2 and 2H2
(ii) It catches fire and forms sodium hydroxide
(iii) P4O10(s)

Question 34.
(i) Write the functions of the following parts in human female reproductive system:
(a) Ovary
(b) Oviduct
(c) Uterus

(c) Uterus –
• Implantation of the zygote
• Nourishment of the developing embryo/placenta formation.

(ii) Structure of Placenta: It is a disc-like structure embedded in the uterine wall, connected to the embryo. It has villi on the embryo’s side of the tissue and on the mother side it has blood spaces, which surround the villi. 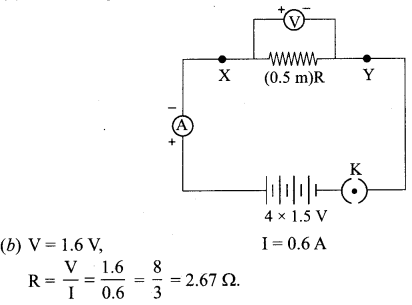 Question 36.
(i) A thin converging lens forms a
(a) Real magnified image.
(b) Virtual magnified image of an object place in front of it.
Write the positions of the object in each case.
(ii) Draw a labelled ray diagram to show the image formation in each case.
(iii) How will the following be affected on cutting this lens into two halves along the principal axis?
(a) Focal length
(b) Intensity of image formed by half lens.
OR
Analyse the following observation table showing variation of image distance (v) with object distance (u) in case of a convex lens and answer the questions that follow, without doing any calculations:

(i) What is the focal length of the convex lens? Give reason in support of your answer.
(ii) Write the serial number of that observation which is not correct. How did you arrive at this conclusion?
(iii) Take an appropriate scale to draw a ray diagram for the observation at S. No. 4 and find the approximate value of magnification.
Answer:
(i) (a) When the object is placed between ‘F’ and ‘2F’
(b) When the object is placed between pole ‘P’ and ‘F’

(iii) No, focal length will remain the same because radius of curvature remains the same. Therefore, intensity of the image will decrease.
OR

(ii) S.No.6 is not correct as the object distance is between focus and pole, so for such cases the image formed is always virtual but in this case it is written that a real image is formed as the image distance is positive which is not possible. 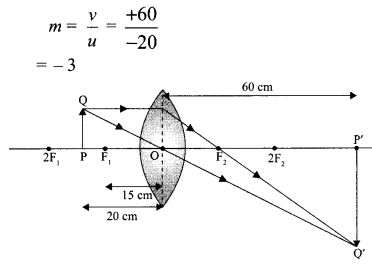