It is the most common of human helminthes and is distributed worldwide.

The adult worms lives in the small intestine particularly in jejunum and in ileum. 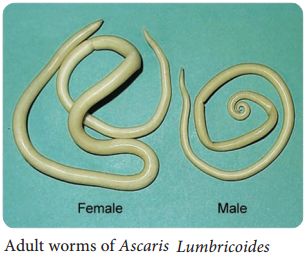 Two types of eggs are passed in feces by the worms.

The life – cycle of A. lumbricoides is completed in a single host, human (Figure 8.17).

Ermbryonated eggs. The fertilized egg passed in feces is not immediately infective. It has to undergo a period of development in soil. The development usually takes from 10-40 days. The embryo moults twice during the time and becomes the infective rhabditiform larva.

Man acquires the infection by ingestion of food, water or raw vegetables contaminated with embryonated eggs of the round worm. The ingested eggs reach the duodenum to liberate the larvae by hatching. These larvae then penetrate the intestinal wall and are carried by the portal circulation to the liver. They live in liver for 3 to 4 days. Then they are carried to the right side of the heart, then to lung. In the lung, they grow and moult twice.

After development in the lungs, in about 10-15 days, the larvae pierce the lung capillaries and reach the alveoli. Then they are carried up the respiratory passage to the throat and swallowed back to the small intestine.

In the small intestine, the larvae moult finally and develop into adults. They become sexually mature in about 6-12 weeks. The fertilized female start laying eggs which are passed in the faces to repeat the cycle. Infection of A. lumbricoides in human is known as ascariasis. The adult worm may produce its pathogenic effects in the following ways.

a. The spoliative or nutritional effects is usually seen when the worm burden is heavy. Presence of enormous numbers (sometime exceeds 500) often interferes with proper digestion and absorption of food. Ascariasis may contribute to protein – energy malnutrition and vitamin A deficiency.

b. The toxic effects is due to the metabolites of adult worm. Ascaris allergens produce various allergic manifestations such as fever, urticaria and conjunctivitis.

c. The mechanical effects are the most important manifestations of ascariasis. In heavy infections, adult worms can cause obstruction and inflammation of intestinal tract, particularly of the terminal ileum.

d. Ectopic ascariasis (Wander lust) is due to the adult male worms. They are restless wanderers. The wandering happens when the host temperature rises above 39°C. The worm may wander up or down along the gut. It may enter the biliary or pancreatic duct causing acute biliary obstruction or pancreatitis. It may enter the liver and lead to liver abscesses.

The worm may go up the esophagus and come out through mouth or nose. It may crawl into the trachea and the lung causing respirator obstruction or lung abscesses. Migrating downwards, the worm may cause obstructive appendicitis. The worm may also reach kidneys. “Larva migrans” is a term used when the larval sworms migrate to various parts of the body.

Symptoms due to the migrating larvae:

Leads to ascaris pneumonia and larvae may enter the general circulation, disturbances have been reported in the brain, spinal cord, heart and kidneys.

Symptoms due to the adult worms:

Larvae:
Larvae can be detected in sputum and often in gastric washings. Chest X – ray may show pulmonary infiltrates.

Eggs:
Detection is through demonstration of eggs in feces. Detection of both fertilized and unfertilized eggs are made after staining. Eggs may be demonstrative in the bile obtained by duodenal aspirates.

Serological tests
Ascaris antibody can be detected by IHA, IFA and ELISA